South African consumer confidence weakened in the first quarter of 2022 on concerns around the economic ramifications of the war in Ukraine.

A quarterly index measuring sentiment fell to -13, from -9 in the previous three-month period, FirstRand’s First National Bank said in an emailed statement Thursday.

That’s the lowest since the second quarter of 2021, when the government temporarily suspended a welfare grant to individuals affected by the fallout from the coronavirus pandemic and tightened lockdown restrictions to slow the spread of the Delta variant of the disease. 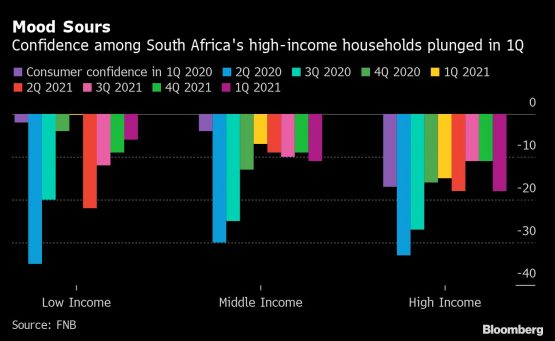 The latest reading is well below the average consumer-confidence reading of 2 since 1994, signalling a low willingness to spend or increased caution among consumers, FNB said. The slump in the index was largely driven by declines in the economic outlook and household financial position of high-income households that earn more than R20 000 a month, it said.

“Although consumer sentiment remains downbeat across all three income groups, affluent consumers are now considerably more pessimistic about the outlook for the economy and their household finances compared to low-income households,” the bank said.

The war and sweeping sanctions on Russia, the world’s second-largest exporter of oil, have upended Black Sea supplies of crude and wheat at a time when global stockpiles are already tight, driving prices higher. Ukraine and Russia ship more than a quarter of the world’s wheat, and the fighting has closed ports and halted transport.

The war has prompted FNB to revise its average inflation forecast for 2022 to 5.6%, from 4.6%, and economic growth estimate downward to 1.7%, compared with a previous outlook of 2.2%.

While affluent consumers were the first to become alarmed about South Africa’s economic prospects and downwardly revise the outlook for their household finances, the less affluent will eventually have to make the largest adjustments to their budgets, she said.

“Discretionary spending will come under strain as the prices of necessities such as food and fuel scale new record highs and interest rates continue to edge up, calling for downward revisions to real consumer spending projections for 2022,” said Matikinca-Ngwenya.

The lender expects South Africa’s central bank to hike interest rates at its five remaining meetings of the year and sees the benchmark rate at 5.25% by the end of 2022, from 4% currently.