SA could regain investment-grade rating in 2026

SA would need to regain at least one investment-grade rating from either Moody’s or S&P to reenter the FTSE World Government Bond Index.
By Prinesha Naidoo and Sarina Yoo, Bloomberg 19 Nov 2021  14:04 South Africa’s renewed commitment to fiscal consolidation, windfall mining revenue and an upward revision to gross domestic product should help it avert a deeper junk credit-rating on Friday and set it on course to regain at least one investment-grade assessment within the decade.

Sixteen of 18 economists surveyed by Bloomberg expect the country to avoid a further downgrade from Moody’s Investors Service on Friday. Prior to the better-than-expected budget, the company’s negative outlook on South Africa’s foreign-currency debt suggested its next step could have been a further cut, a move that would have taken its assessment in line with those of S&P Global Ratings and Fitch Ratings. S&P is also unlikely to change its assessment in a review scheduled for the same day. South Africa is similarly expected to avoid another downgrade from Fitch, which also has a negative outlook on its rating, according to 94% of survey respondents.

While South Africa’s finances remain shaky, Finance Minister Enoch Godongwana’s commitment last week to rein in debt, reduce loan-servicing costs, narrow the budget deficit and cut spending in the coming year should help bolster investor confidence. The medium-term budget was the clearest sign yet that the former labor unionist and head of economic transformation of the ruling African National Congress won’t give in to calls to scale back austerity measures.

“We don’t see another downgrade barring any major shocks. But the bar for upgrading is really high. It is possible for the Treasury to meet it by the end of the decade if it sticks to the consolidation plan outlined in the budget, but risks abound.” — Boingotlo Gasealahwe, Africa Economist

The budget showed a tighter path to a primary surplus, where revenue is higher than non-interest spending, and a faster narrowing of the fiscal deficit. That’s partly due to significantly higher tax collections from mining companies reaping the benefits of elevated commodity prices and the state’s decision to use some of the money to pay down debt.

A statistics review that showed Africa’s most-industrialised economy is 11% bigger than previously estimated means debt is now forecast to peak at 78.1% of GDP — almost 10 percentage points lower than the government estimated in February — in the 2026 fiscal year. Debt-service costs — the fastest-growing expenditure line item since 2011 — will continue to rise, peaking at 5.3% of GDP in the same year. 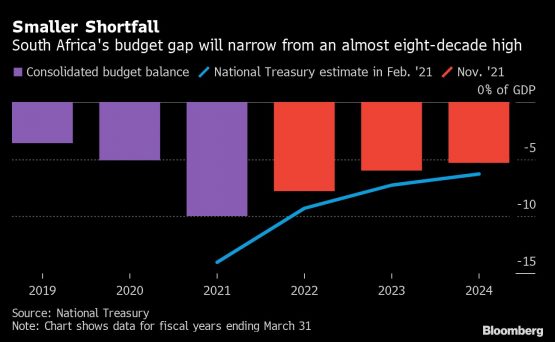 South Africa’s economy is stuck in its longest downward cycle since World War II and has grown by less than 3% annually since 2012. While output is expected to return to pre-coronavirus pandemic levels by late next year, that’s unlikely to be enough to create sufficient jobs in a country where more than a third of the workforce is unemployed and tackle poverty in one of the world’s most unequal societies. Godongwana has, so far, resisted calls by civil-society groups for increased welfare spending and for the introduction of a basic income grant — a policy business organisations say is unaffordable. Instead, he said he’d push to develop a “track record of implementation” for economic growth-enhancing reforms, particularly in infrastructure.

While efforts by Godongwana’s predecessors to usher in policy changes have been stalled by powerful vested interests, the government is targeting reform success by mid-February. That should sway Moody’s and Fitch to upgrade their outlooks to stable toward the end of next year, Godongwana said.

Only 11% of economists polled by Bloomberg expect any of the three ratings companies to upgrade their assessment of South Africa within the next 12 months. More than half the 16 respondents to a separate survey question predict the country will regain an investment-grade rating from at least one of the three major companies within five to eight years.

South Africa would need to regain at least one investment-grade rating from either Moody’s or S&P to reenter the FTSE World Government Bond Index, potentially upping portfolio inflows and bringing down borrowing costs even further. Still, the country’s sovereign risk premium — a measure of the increased cost investors pay to hold South African debt — is set to improve to 3.1% in 2023 from 3.5% this year, according to National Treasury estimates. 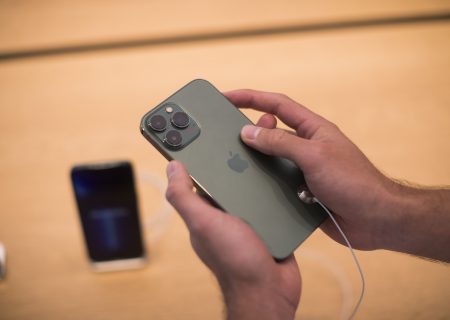