Nersa confirmed in a statement that it had approved a total of seven power generation licences for preferred bidders, including three for Karpowership.
By Wendell Roelf, Reuters 22 Sep 2021  07:22 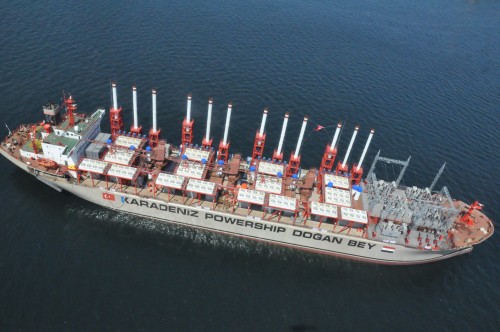 The National Energy Regulator of South Africa (Nersa) confirmed in a statement that it had approved a total of seven power generation licences for preferred bidders, including three for Karpowership.

Karpowership has faced numerous challenges since the South African government in March granted it the biggest share of a 2 000 megawatt emergency power tender to provide the cheapest and quickest option for electricity.

Its plan to generate power on its floating gas ships and plug it into the South African grid has been stridently opposed by environment activists and local fishing communities.

Besides the power generation licence, the firm needs to clear several regulatory hurdles, including environmental approval, and litigation challenging the tender outcome that runs for 20 years needs to be resolved.

“We have confirmation from Nersa on generation licences and are very happy to be moving forward,” said a Karpowership spokesperson, adding the licences were for three ports – Coega, Richards Bay and Saldanha Bay – that would collectively supply around 1 200 MW of capacity.

In June, the Department of Forestry, Fisheries and the Environment refused environmental approvals for the three gas-to-power projects for reasons including that it did not comply with public participation rules.

Earlier in September, a South African high court agreed to postpone an appeal against the emergency tender brought by DNG Energy, a local company, which was not chosen from 11 preferred bidders and wants the decision overturned.

Any delays in finalising the emergency power tender could prolong an energy crisis that has cost Africa’s largest industrial nation billions of dollars in lost revenue due to regular electricity blackouts.

Proof positive that Nersa does not give one iota for the climate or anything but enrichment of foreigners by stealth !!!

Definitely part of the problem.!!!

Have your climate while you sit in the dark.

ESKOM: We do supply you with electricity all the time but when we do, we ask you not to use it.

Vlad the Impala 4 weeks ago

So what was all the who ha about then, we knew it would come round to this.

Some under the table dealings here as usual.

The governing party is insolvent – follow the money trial.

A twenty year short-term deal? It does not make financial or ecological sense.

Environment activist is a uct. student who wake up in a backroom in mowbray with a pony tail tattoos and n ring through his nose .The economic and environmental damage they create are a low growth rate and the endangerment of species like rhino whose trade in horns would have secured them a safe future

So many (understandably) negative comments,

And 20 years seems a bit ridiculous for a tender-period.

However;
Assuming this deal was not (as) corrupt then I am pleased to see we have some kind of emergency power generation being approved.
Combined with a fairly recent allowance for the 100mw solar/renewable energy legislation it does look like SA has finally doing a few things right.

Let’s hope it does turn out to be useful and reasonably priced electricity or this comment won’t age well !