While output rose more than expected in the three months through March the unrest that erupted in SA last week is a key risk to the outlook for 2021.
By Prinesha Naidoo, Bloomberg 22 Jul 2021  08:02 South Africa’s central bank will probably keep the benchmark interest rate unchanged and lower its economic-growth forecasts on Thursday as the country reels from a third wave of Covid-19 restrictions and after deadly riots.

While output rose more than expected in the three months through March and data, including the composite leading business-cycle indicator, suggest an acceleration in gross domestic product in the second quarter, the unrest that erupted in South Africa last week is a key risk to the outlook for 2021.

The looting and arson, and reintroduction of a strict lockdown are likely to push policy makers to lower their 4.2% expansion projection for this year and may push out their prediction that output will return to pre-pandemic levels in 2023. Debris covers the floor between empty shelves inside a Supa Store supermarket following rioting in the Soweto district of Johannesburg, South Africa, on Thursday, July 15, 2021. Marauding mobs have ransacked hundreds of businesses and destroyed telecommunications towers and other infrastructure, while transport networks and a program to vaccinate people against the coronavirus have been disrupted. Bloomberg

Economists, including Michael Kafe of Barclays Bank Plc, see the riot damage shaving as much as one percentage point off GDP growth in 2021. That could see the monetary policy committee delay the start of an interest rate hiking cycle. The panel has since late last year signaled that its next move will be up and the last time any of its five members voted for easing was in January.

The central bank’s quarterly projection model, which the committee uses as a guide, in May indicated one rate increase of 25 basis points in the second quarter and another in the fourth. The MPC already deviated from the framework by leaving the benchmark unchanged at its last meeting and consumer-price growth that remains close to the 4.5% midpoint of its target band shows it still has room to support the economy. 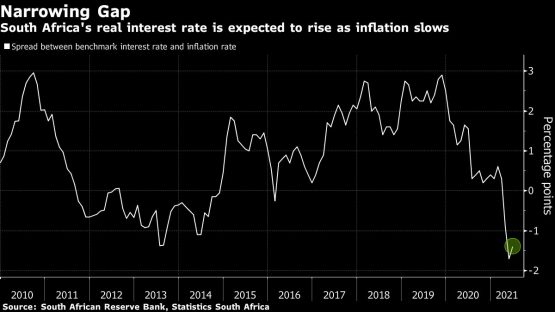 Data published Wednesday suggests inflation has peaked and that the gap between the rate of price growth and the key interest rate will narrow in the coming months, Kim Silberman, a fixed income and currency analyst at FirstRand Group Ltd.’s Rand Merchant Bank, said in an emailed note.

The real interest rate will rise to -1% over the next three quarters from a low of -1.7% in May, without the central bank having to increase borrowing costs, she said. That could help make local assets more attractive to foreign investors.

Cigarette sales climbed for first time in 20 years, US says

Cigarette sales climbed for first time in 20 years, US says