As restrictions to curb the spread of the coronavirus pandemic ravaged output and disrupted trade.
By Prinesha Naidoo, Bloomberg 9 Mar 2021  12:12 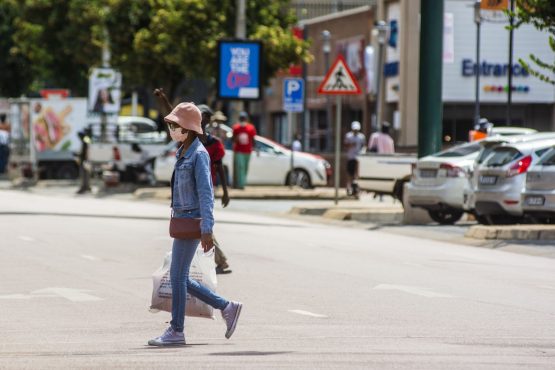 South Africa’s economy contracted the most in a century in 2020 as restrictions to curb the spread of the coronavirus pandemic ravaged output and disrupted trade.

Gross domestic product shrank 7%, compared with a 0.2% expansion in 2019, according to a report released by Statistics South Africa Tuesday in the capital, Pretoria. That’s the biggest decline since 1920, yet the drop was smaller than what the National Treasury forecast in its annual budget last month. 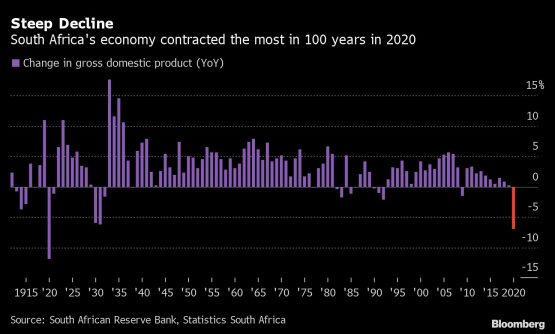 The economy may only return to where it was at the end of 2019 by 2024, due to longstanding constraints such as electricity shortages, a slow reform agenda and repeated waves of Covid-19 infections, according to Mpho Molopyane, an economist at FirstRand Group Ltd.’s Rand Merchant Bank. Lower government spending and a weak recovery in employment will also affect growth, she said.

The fourth-quarter expansion was stronger than economists expected, and a faster rebound to pre-Covid-19 levels will boost the government’s efforts to rein in debt and the fiscal deficit that surged over the past year.

“We expect the loss in momentum in the recovery to extend to the first half of the year due ongoing virus risks amid a slow vaccine rollout. The South African Reserve Bank has already signaled two rate hikes this year starting from the second quarter. However, we think the risks to the near-term growth outlook should keep rates on hold for the first half of the year, at least. The better-than-expected GDP outcome, together with rising food, oil and electricity prices will likely strengthen its resolve.”

President Cyril Ramaphosa moved the country to virus alert level 1 from level 3 on February 28, dropping most of the restrictions on an economy that was in a recession even before it detected its first Covid-19 case a year ago. The nation’s initial hard lockdown to contain the virus started in late March 2020.

And destroyed how many lives? Congrats on shutting down the economy and creating an economic depression

Except the premise of this article, like most, is completely false. It was not the *virus-hit economy that shrank. Take your pick of the true headline:

We have much worse viruses and threats in SA that we live with and get on with (HIV, Malaria, TB, Poverty etc.etc.) that are much higher up the priority list than the Wuflu. We crashed our economy because it was trendy to follow the first world off an economic cliff. Perfect excuse for government to wield power and indebt the nation further, and loot and pillage along the way

The lifestyle/ stress damaged caused to Billions of people does not justify the “shut-down” argument to save lives. (Death vs Recovery)

It is a fact, humans are no better than sheep.

The biggest virus is the ANC. Like sheep they tried to follow(as always they follow they never lead) first world countries that can afford lockdowns. With assets of USD175k being the top 1% they cannot see the facts ie that we are a dirt poor third world country with a currency that is used by foreign traders to make money for themselves.

The mismanagement by the hat wearing clown, Mr cold roast chickens Patel and the great health minister with his millions of soon to expire vaccines at 250% of the cost to Europe says everything about the ANC..but worse about the voter who supports this.

FLEE-unemployment is soaring, crime will get worse and we are at the fiscal cliff shortly with a drop in quality of medical and education being inevitable!

The green shoots some see is the moss on the corpses of thousands businesses . Well done ANC – I am sure you will have a plan to sort this out gloriously . ( Plan Nr. 12 563 )

I’ve said it many times, I know, but the point is valid and proven by the statistics now. We had only one man-made economic disaster of this magnitude in the past, and that was the Xhosa Cattle Killings in 1856. The fifteen-year-old Xhosa girl named Nongqawuse prophesized that the British forces will be driven from the land if the Xhosa people burnt their maize crop and killed their cattle. They put the economy in lockdown, to use a modern-day narrative.

Similar to modern-day lockdown measures, the 1856 event was based on pseudo-science, bad models and gullible advisors. The 1856 event caused widescale famine and the extermination of 80% of the Xhosa nation. We have to see how the current one pans out, although we are seeing casualties already.

Why would they start to hike rates this year? Ridiculous strategy. The state has done nothing to assist the economy to turn around, about the only assistance we’ve received is the rate cut, otherwise they’ve just piled on the additional pressure AS USUAL.

The Nat’s under full sanctions did better!!

Oh! And its not just covid that’s the problem. You know what I mean.