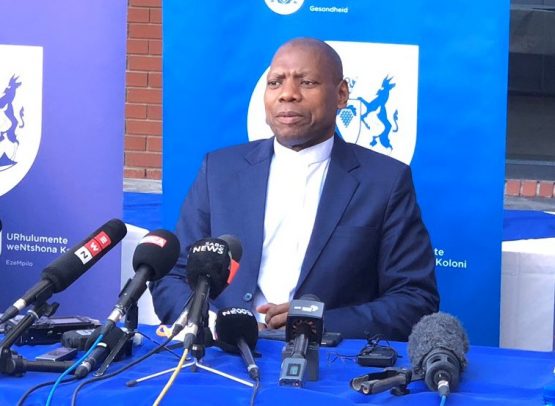 Health Minister Zweli Mkhize speaking during a briefing at the Khayelitsha Hospital in Cape Town late on Friday. He confirmed the number of Covid-19 cases in South Africa has now reached 1 505. Image: Supplied

The number of confirmed Covid-19 virus cases in South Africa has topped the 1500-mark, Health Minister Zweli Mkhize announced during a briefing at the Khayelitsha Hospital in Cape Town on Friday afternoon.

He noted that there were now 1 505 “positive cases” as of Friday, with 50 000 people having been tested in the country thus far.

The minister said that there have been 43 newly reported cases since the last update on Thursday afternoon. The number of deaths has risen from seven to nine, however, the two latest deaths are yet to be officially confirmed. There have also been 45 recoveries.

“We want to report sadly two more deaths from KwaZulu-Natal – an 80-year-old male and 81-year-old female… We would like to convey our condolences to the families and friends of these individuals. We would also like to thank the health workers who are working tirelessly every day,” he said.

Mkhize said that the two further deaths, believed to be linked to Covid-19, are yet to be confirmed in KwaZulu-Natal.

“We are still awaiting confirmation on the two KZN deaths. I raised them because you have heard about them,” he said.

KwaZulu-Natal was the first province in the country to report a case of the contagious disease almost a month ago on March 5. The number of cases, largely from people travelling into the country, increased significantly until late March.

President Cyril Ramaphosa declaring “state of disaster” measures on March 15, and later, on March 23 announcing at 21-day national lockdown effective from midnight on March 26, seems to have slowed the spread.

Mkhize has however warned that it is “still early days” and called for South Africans to take the lockdown seriously.

More than a million people around the world have now been reported to have contracted the virus, however, there have been around 200 000 recoveries. There have been more than 50 000 deaths globally related to Covid-19.

The virus first broke out in the Wuhan province of China in December. It escalated globally in March, which caused lockdowns in dozens of nations across the world and unprecedented stock market volatility.

There are now serious concerns about a global recession, which will exacerbate the recession in South Africa. The rand hit a new all-time low of R19 to the US dollar on Friday evening.

It seems as if the banning of cigarettes and booze is really helping!
Can one buy ice cream and sweets and chips and soda cold drinks?

50.000 have been tested, where are the results? This whole thing is a scam.

Absolutely. This is completely political deception.

I wish I could believe the figures.

I don’t believe anything this guy says

Our current man of the hour Zweli Mkhize has been as thick as thieves with one Jacob Zuma for years.

These numbers does not make sense.
Yesterday for example, a hospital in KZN was closed because of 11 staff members testing positive.
Yet the total number of new infections yesterday was only 43. Even with a basic understanding of stats you will see how improbable it is that SA had only 32 new confirmed infections in the rest of the country. They are either not releasing the true figures to avoid a mass panic or they are not testing.

No man power, No supplies, Shortages of various sorts … He knows that the population will be culled.

Looking at the latest data the countries department of health is an abysmal failure yesterday they had tested 50219 with 1505 infections and todays data shows 53937 tested and 1585 infections. Based on my calculations – managing to test 53,937 in 6 days it could take the department 15 years to test about 55 million people. There seems to be an absolute lack of urgency by the Dept of Health or a total lack in their ability to count or process swabs.