The country’s finances have deteriorated rapidly over the past decade.
By Antony Sguazzin and Prinesha Naidoo, Bloomberg  20 Jun 2020  09:55 South Africa’s debt levels will exceed 100% of gross domestic product by 2024-25 and rise to almost 114% by 2028-29, according to a document presented by Finance Minister Tito Mboweni and seen by Bloomberg.

Mboweni made the presentation to the National Economic Development and Labour Council on Friday, according to posts on his Twitter and Facebook pages. It shows gross government debt will climb to 80.5% of gross domestic product in this fiscal year, compared with a projection of 65.6% in February. The trajectory presented shows no sign of stabilising by 2028-29.

The Herculean task of closing the hippopotamus mouth. pic.twitter.com/aQL7iHNPmI

Mboweni is due to present a special supplementary budget on June 24 that will reflect the devastation wrought on the economy by the coronavirus as well plans to fund a R500 billion stimulus package.

“The budget process is in its final stages and still being finalised,” Treasury spokeswoman Mashudu Masutha-Rammutle said by text message. “This includes data and estimates. In this regard, any information published now especially from unverified leaks, is potentially inaccurate compared to what will be tabled.” 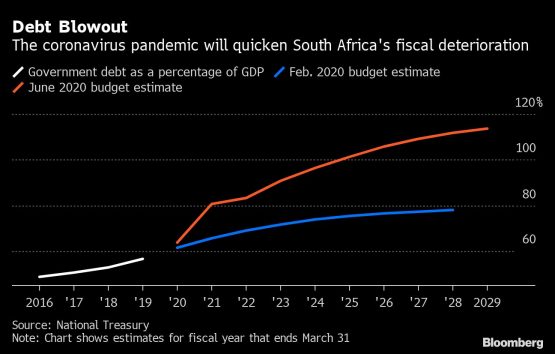 The country’s finances have deteriorated rapidly over the past decade, partly due to a series of bailouts for loss-making state-owned companies including Eskom Holdings and South African Airways. Mboweni on Thursday told lawmakers that the government must cut spending to avoid a sovereign debt crisis by 2024.

A debt crisis would force the nation to seek help from the International Monetary Fund, which would result in public service and state pensions being slashed, along with “all kinds of structural reform programmes we do not want,” Mboweni said at the parliamentary meeting.

The pandemic has already forced the ruling African National Congress to break its resistance to borrowing from the IMF and request a $4.2 billion loan to cover virus support. The lender has not yet approved the funding, which must help pay for the R500 billion stimulus package.

Point of no return?

so just do the structural changes now and the IMF will not be your boss…as easy as that. Apologies…forgot that the ANC prefer the Africa wealth model of money for the elite from mining and poverty for the rests.

A debt crisis would force the nation to seek help from the International Monetary Fund, which would result in public service and state pensions being slashed, along with “all kinds of structural reform programmes we do not want,” Mboweni.

Who says? These reforms are exactly what the every single taxpayer + business has been begging for the last 2 decades.

along with “all kinds of structural reform programmes we do not want,” Mboweni said at the parliamentary meeting.

Why would you not want the assistance to guide in structural reforms? If you have structural issues, then guidance on reforms should be welcomed?

Sounds like the ruling party has a real plan to make EVERYONE POOR.

“Structural reform programmes we do not want” Like what Tito? Stopping corruption and all the ANC cadre’s backhands?

The ANC is behaving like a skunk in a trap, because, let’s face it, the ANC is trapped between the empty promises they made to their supporters and the economic realities of unsustainable debt and a bankrupt state.

The more they scratch, growl, hiss and stink, the deeper they enter into the trap. The IMF is the noose around their necks. They will try everything to prevent the noose from strangling them. They will take a bite at pension funds, they will scratch at wealth taxes, they will jump on exchange controls, they will growl at property owners, and they will use the stench of the inequality debate to buy time. In the meantime, the noose is tightening at an increasing pace.

This explains why the crowd in Luthuli House stinks to high heaven.

The boys over at Luthuli house are arguing: “Don’t worry by then we will lobby some has-been rock star like Bob Geldoff or Bruce Springsteen to make the write-off of debts owed by poor African countries run by tinpot dictators seem fashionable and morally correct. It works every time.”

I can see at the next election the ANC saying that they have given the people a debt-to-GDP ratio of 113.8%. To which they receive rapturous applause. Viva viva. A bit like Mugabe who said in a cartoon, ‘A million percent inflation, what more do you want?’

Bottom line. SA is broke and broken. Debt to GDP at that level with our high interest rates means we are bust. Add in the inferiority complex of the ANC(precluding rapid IMF intervention) and related social unrest from an inevitable drop in government spending( alternatively colossal inflation and ZAR depreciation) and SA is going to become an even more unhappy, divided, violent and dirt poor country. The rich world has been battered too hard to write off the debt here and even if they do they will be reluctant to lend again thereby precluding an economic recovery.

So if you can flee -either for any job if young -or any country that is not too expensive to retire in -get out now.

As for the ANC-they have failed-and evidenced their inability to govern.

What if we have a new government by then, and they would have made some sweet changes? Gotcha!

This point of view is based on linear analysis/ projection. There is absolutely no cyclical analysis and no context applied to same.

Just look at some of your own startling facts. In 3 months the debt to GDP has sky rocketed from 65% – 80%! However we are still in lock down, so this article fails to realise 2 facts of this ratio – i believe Tito gets it, he is just being trying to appease Luthuli house with not being too blunt.

The ratio is sky rocketing, this is correct. The 2 inputs are assumptions – one is assumed GDP, where even the most ardent ANC supporter can see current GDP expectations are easily way too optimistic by a factor at least 100%, if not a lot more. So your one side of the ratio is already way off, affecting the following 4 years through to only 100% in 2024/25 (not a chance). Then you assume debt levels can even remotely stay at current projections. So far R370 billion has been added for Covid 19 (130 billion was redirected), there is no chance you can make it through this self induced economic euthanasia with this level of debt. I expect conservatively that this will hit R1 trillion before this time next year.

It is astounding that we can openly see how in just 3 months we have jumped from 65% to 80%. But in this unfolding train wreck – we then only expect to climb another 15% in the next 4 years!!!???

I would love to know the assumptions being used on interest rates and the exchange rate. These will have a huge impact on this ratio. I can almost guarantee they are ridiculously optimistic – probably a ZAR assumption of 15.00 this year and 16.50 next year and likely not more than 18.50 through 2024. There is also an assumption wrongly so, that global interest rates will remain close to zero. Tito will remember well what happened when he entered the SARB in the late 90`s Asian crisis. He will remember well the impact on interest rates from the Asian crisis, combined with the then LABOUR minister being made governor of the reserve bank.

This is why governments and corrupt governments (is there another kind?) always get it so wrong. Run these numbers again, however, use a drastically reduced sustained low/ negative GDP, double or triple the debt requirements – i cannot see us getting past this covid 19 without R3 trillion+. Now adjust the ZAR to 25.00 average for the next 5 years and 35.00 for the next 10 years. Interest rates doubling locally in the next 2 years and then doubling again in the next 5 years. Over 10 years with anticipated EURO zone rates at 8% – 12% where would that put RSA, i would guess if the country is stable – in the low 20`s.

How does the debt to GDP ratio look now?