SA is the second-largest source of imported oranges in the US and also ships table grapes, litchis and avocados to the world’s biggest economy. Image: Shutterstock

South Africa’s government will tell President Donald Trump’s administration that its review of a preferential trade agreement that could put as much as $2.4 billion in exports at risk is premature and potentially damaging for both economies.

The US Trade Representative will start public hearings on Thursday to review the nation’s duty-free access to the US market under the so-called Generalised System of Preferences, its oldest and largest trade-preference programme for the world’s poorest economies.

That’s after it accepted a complaint from the International Intellectual Property Alliance — a private-sector group that represents 3 200 US companies including the makers and distributors of books, films, music and video games — that alleges South Africa’s Copyright Amendment Bill and Performers’ Protection Amendment Bill fail to “provide adequate and effective protection of US copyrights.”

According to the pre-hearing brief filed by South African Embassy in Washington DC, senior officials in the Department of Trade and Industry will argue that the IIPA’s concerns are “at best speculative and certainly premature” as the proposed bills are not yet in operation and undergoing a review by President Cyril Ramaphosa. Xavier Carim and Evelyn Masotja will make the representations. 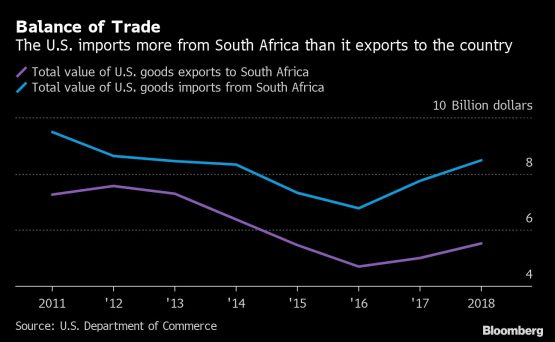 To qualify for GSP benefits, a country must meet the criteria established by Congress and the extent to which the country provides adequate and effective protection of intellectual property rights may affect its eligibility.

This is not the first time that South Africa’s actions put it at risk of losing preferential trade access to the US. In 2015, the US warned that changes to legislation that would limit foreign ownership of private security companies in South Africa may affect the country’s inclusion in the African Growth and Opportunity Act. The bill was passed by parliament, but was not signed by the president.

If the outcome of the review is negative, South Africa could lose its preferential market access under the GSP and AGOA, which together allow most sub-Saharan African countries duty-free access to the US market for almost 7 000 products. This could deepen the malaise of an economy stuck in the longest downward cycle since World War II.

Trade in goods and services between South Africa and the US was $18.9 billion in 2018, with $2.4 billion of exports from Africa’s most industrialised economy that happened under the two preferential programmes, according to US government data.

South Africa’s agricultural sector has the “greatest exposure” to a potential loss of preferential market access, according to Eckart Naumann, an independent economist and associate at the Stellenbosch-based Tralac Trade Law Centre. About 75% of US-bound farm exports, which is equivalent to $304 million, was cleared under duty-free preferences in 2018, he said.

The country is the second-largest source of imported oranges in the US and also ships table grapes, litchis and avocados to the world’s biggest economy. The viability of the local fresh-produce industry, which supports more than 300 000 jobs, could be affected by a loss of access to AGOA, Anton Kruger, the CEO of the Fresh Produce Exporters’ Forum South Africa, said in his submission. The South African and US minerals and metals industries could be affected by a negative review, even though only 15% of the $4.75 billion in US-bound freight used GSP and AGOA preferences last year. Hulamin, a Johannesburg-listed aluminium semi-fabricator that supplies the US with metal used in the production of beverage cans, vehicle manufacturing and construction, estimates that a loss of these benefits would increase drive the price at which it delivers aluminium sheet and plate products in the US

“This could ultimately have profitability implications for companies that are importing aluminium for further processing,” the company said in its submission to the US Trade Representative.

There will be no change to South Africa’s GSP or AGOA benefits during the review process, a US embassy official on Pretoria said.

They should consider sending someone with credibility.

CR has none and is seen as a socialist / communist puppet.

The arrogance of the ANC to think the World owes them when they have all but destroyed what was once the darling of Africa, pristine, beautiful and SOLVENT

Here’s a stark reminder for Squirrel and his comrades

“In terms of section 104 of the act, the sub-Saharan African countries eligible for AGOA have to commit to protecting private property rights. AGOA, which came into effect in May 2000, provides trade preferences for quotas and duty-free entry to the US for certain goods”

No probs we can get a deal with our friends in Venezuela, Zimbabwe or Cuba.

Yes-the stupidity of the arrogant but delusional ANC knows no bounds. Must be an Africa thing.

Agree Mmmm : Trump must be quivering in his boots .An economic lecture from the ANC Govt will surely turn him to socialism /Communism :

And then embark on a ‘total shutdown’ of the hotel they are staying in.

As was clear from the latest DAVOS meeting: SA is starting to lose its relevance on the world economic stage.

As time progresses, we won’t be noticed by the world economies.

Just as well our country’s name is not (yet) called “Azania”, because Trump may struggle to pronounce it, like he did with “Nambia” (…and no international body would ever notice the misnaming).

Trump: “….let’s send a delegation to “Zana” shall we, to that insignificant African country right at the southern tip”

2.5 Billion in a trillion dollar economy.Are we on the radar.

Maybe let us have another demonstration outside the US embassy.

Or continue to vote against every US UN position.

We wrote the book on public relations.

South Africa’s government will tell President Donald Trump’s administration = LOL!!
1. The trade agreement with the US includes protection of property rights, which at first hand looks like we ignoring that clause.
2. Good governance is also expected to fulfill action against corruption, which we have miserably failed with.

Trump is a President for his people not his political party………he is doing this to create more work for his own people…..he will tell the ANC government to go away 🙂