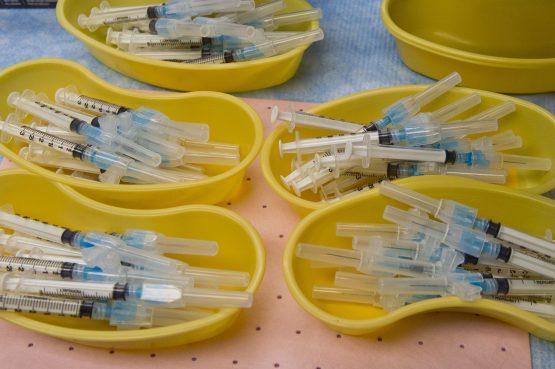 South Africa’s first vaccines will arrive in the country on Feb. 1, signalling the start of an inoculation program that has been criticised for its tardiness.

The first million of 1.5 million doses of the shot developed by AstraZeneca and the University of Oxford and produced by the Serum Institute of India have been cleared by South African regulators for use, Health Minister Zweli Mkhize said at a press conference Wednesday. They will be ready for distribution 10 to 14 days later, he said. The campaign will prioritise 1.25 million health workers.

The announcement comes amid widespread criticism of the government’s failure to sign bilateral agreements with drugmakers in 2020. The government clinched the deal with Serum this month and is pursuing other talks as the World Health Organization-backed Covax program will only supply enough vaccines for 10% of South Africa’s 60 million people this year.

“As a country, for us to expect our first consignment of vaccines less than a year after the first case of Covid-19 was recorded is a massive achievement of unprecedented proportions,” Mkhize said.

Pfizer Inc. and BioNTech SE have also applied for registration of their vaccines in South Africa, according to a presentation by the health products regulator at the same press conference. Johnson & Johnson has submitted data under a so-called rolling review to accelerate approval when its trials are complete.

Health Ministry and government department officials gave details of how the vaccines will be distributed and paid for at the press conference.

South Africa has the most confirmed cases on the continent and a new, more transmittable variant of the virus has caused a sharp rise in infections in recent weeks. At least 57 countries worldwide have started inoculation campaigns.

The slow start of vaccinations will result in the deaths of thousands of people and delay an economic recovery, said Matthew Parks, parliamentary coordinator for the Congress of South African Trade Unions, a 1.8 million-member group and key ally of the ruling African National Congress.

“It’s extremely insensitive to the 500 lives lost daily,” Parks said. “Every day lost comes at a devastating impact in lives and jobs lost. It will make our recovery prolonged as other countries further ahead vaccinating will impose trade and travel restrictions on our already battered economy.”

The odds are high 10-1 that a front line politician will jump the queue.

Exceptions being Min of Health and Pres CR, premiers of Provinces and their ministers of health. Other ministers should stand in the line like the rest of us.

don’t forget the SANDF in their great wisdom bought a lot of vaccine for R200million. Now that should go a long way to helping the first batch.

Or did I miss something here………….anybody willing to look at some of the top brass bank accounts. I mean generals etc, they guys paid to protect us and lead us in times of war. You know, Montgomerys, Pattons etc.

Why cant the ANC simply go beg the Israelis to help them out here. Israel has vaccinated nearly half of their population. Once the second dose is done ..say 5 weeks from now…and the immune response kicks in…in say another 3 weeks the death rate wild plummet in Israel and knowing them they will have surplus stock. So by end of March/April watch Israel be the global winner!

So let them sell their Oranges to Woolies-all is forgiven and simply ask them to send their surplus, experiences with execution and side effects and we will support them forever

No they are parasites, like cultural leaders, Zulu kings etc.

Correct. They are co-morbidities.

Does the vaccine work? One clever guy suggested that he will only take the vaccine if the ANC members start stealing it for self and family.That is a sure sign that it works.

By the time they start stealing it we should be fighting the next (yet unknown) pandemic.

When they steal it. Just know its to late. Let them have it. They deserve it.

1,5 million vaccines means 750,000 inoculations. People seem to forget these AstraZeneca vaccines (as with most of them) require TWO shots to work.

Only Johnson & Johnson’s shot is a single jab and that’s not on the market yet.