UPDATE: Allegations of corruption in PIC and Karan Beef deal not substantiated

Bid in jeopardy following charges of corruption involving the alleged lover of a member of the PIC board.
By Tebogo Tshwane 22 May 2019  00:07 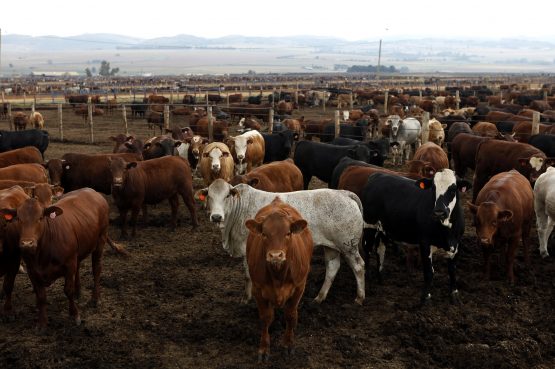 Cows at a Karan Beef farm near Heidelberg in Gauteng. The PIC has paused the R5.2bn transaction while the commission finalises its investigation into whistleblower Noko's claims. Picture: Reuters/Siphiwe Sibeko

NOTE: In its final report, the PIC Commission made no finding of impropriety related to the Karan Beef transaction.

The final report stated that “even though a public invite was extended to for anyone with evidence or information on the deal to come and substantiate the allegations made in the Noko emails, no one came forward and the deal had gone through the normal PIC processes.
“The Commission finds that the allegations in the James Noko email of corruption and impropriety in the Karan Beef transaction have not been substantiated. There is, therefore, no substance in them. Consequently, no finding of impropriety in the investment decision in the Karan Beef transaction can be made”

The original article appears below:

The Public Investment Corporation’s (PIC) bid to purchase one of the largest cattle feedlots on the continent looks set to be derailed, with the R5.2 billion transaction now in limbo due to allegations of corruption.

Questions of impropriety around the Karan Beef transaction were raised at the end of January in a set of emails sent by the PIC’s infamous whistleblower ‘James Noko’, who also goes by the name ‘Nogu’.

In the emails, Noko accuses the state asset manager of inflating the valuation of the meat company to benefit Sello Motau, a director of Theko Capital, who had allegedly been brought in to provide advisory services on the transaction by non-executive board member Dudu Hlatshwayo, who is also named as Motau’s lover in the emails.

“I wish to put it on record that I categorically deny all the allegations levelled against me by James Noko as being without any foundation and without any substance,” Motau told the PIC commission of inquiry on Tuesday.

Motau added that Noko’s allegations were simply intended to defame him and ruin his reputation as well as that of his company.

The inquiry is investigating issues of impropriety at the state asset manager, which manages over R2 trillion in government pension funds.

Read: Who are the leading importers of South African beef?

Despite his protestations against the allegations, which Motau said came as a shock to him and those who have been working on the deal for the past two years, the transaction has come to a halt.

The Karan Beef sale was meant to be concluded by May 22 – the long stop date by which all the conditions of the transaction had to be satisfied – but the PIC has now requested a “confirmatory due diligence and valuation” of the deal, and has referred the allegations made by Noko to the PIC’s social and ethics committee.

Motau told the commission that the consultants who were supposed to conduct the confirmatory due diligence and valuation should have been appointed in March, but this has not happened. Meanwhile, the social and ethics committee has resolved not to make any pronouncements on the Noko allegations because the allegations are under investigation by the PIC inquiry.

Similarly, the PIC has taken a decision to freeze the transaction until the commission finalises its investigation into Noko’s claims and provides its final report.

The Karan Beef deal, which was brought to the PIC in 2017, was originally meant to be concluded by February 1.

But a day before this the Noko emails surfaced. “As a result, the relevant sale documents had all been signed, while the funding documents had not been finalised, placing the transaction in a precarious position,” said Motau.

Motau said he was approached in 2017 to provide advisory services on the deal by Pelo Agri, a black economic empowerment consortium that wanted to buy Karan Beef, which at the time was considering selling the company to a foreign company.

He said Karan Beef, as a leading supplier of beef in South Africa, played a strategic role in the economy and that if it was not acquired by a South African company “it could create a crisis in the local market from a food security perspective in the long-term”.

Pelo Agri was responsible for appointing service providers to conduct the valuation and due diligence reports on the Karan Beef transaction.

Karan Beef’s independent valuation was conducted by Rand Merchant Bank (RMB), which priced the company within a range of R3.9 billion and R5.4 billion based on three scenarios.

“In the final analysis, RMB recommended an indicative valuation range of between R4 billion and R4.5 billion for [a] 100% non-controlling stake in Karan Beef as opposed to the seller’s valuation of R6 billion,” Motau told the commission.

In the end, the sellers of Karan Beef agreed to sell a 90% stake in the company for R5 billion. Under this agreement, R4.5 billion was payable immediately while R500 million would be paid out at the end of a 12-month period should the company meet certain operational and financial milestones.

The PIC would get a majority shareholding in the final structure, with 60% ownership, the Pelo Agri consortium would hold 30%, and the Ivor Karan Family Trust would hold the remaining 10% for a period of three years.

The consortium would be eligible to buy the 10% after three years for R200 million, which would bring the total acquisition amount to R5.2 billion.

The PIC, Pelo Agri and Karan Beef were negotiating the final details of the transaction when the Noko emails dropped, levelling charges of overvaluations intended to benefit Motau, Hlatshwayo and politicians.

“To the best of my knowledge the price of Karan Beef was not inflated,” said Motau, stressing that it had been conducted by one of the leading banks in the country, RMB. At the same time, said Motau, the PIC had also conducted its own valuation.

“The final price was agreed with the seller after extensive negotiations,” he said.

He also denied being in a romantic relationship with Hlatshwayo, saying it was merely a “cordial business relationship” as they serve on the Lanseria International Airport together and have “only socialised in a business context”.

I hope the government (PIC) does a better job of providing us with meat than they do with all the other businesses that they run EG SAA, Denel, PRASA, municipalities etc.

Good luck with that. Look at all the other agricultural ventures taken over by the state; mostly moribund and used to syphon off taxpayers money into ANC cadre pockets. And Ramaphosa still squeals on about EWC.

Time to clean up the PIC!!!

PIC, yet another moneypot that the corrupt “new south africans” can wait to plunder.

How do turn a feedlot into a million Rand business? You begin with an R5 billion donation from the PIC. Here we have another Zebidiela Citrus Farm and Estina Dairy Farm in the making.

When they enter the feedlot business, the PIC will have to accept the manure as dividends, when the cash flow disappears. There is a 10% chance of a return OF capital and the return ON capital will be in the form of manure. Pensioners will have a lot of sh#t. Fools rush in where angels fear to tread.

Put people who couldn’t organise a BJ in a bordello in charge of a beef company. Yeah, that’ll work out.

Karan Beef are a cartel who keep red meat supply entrenched in the townships.

Try start an aquaponics business and supply fish into the market- you won’t last long!

Why government should have any role whatsoever in supporting this monstrosity rather than levelling the playing field for healthier, less environmentally detrimental alternatives is a mystery in itself.

No mystery at all. Simple answer = money in back pocket. Self enrichment without adding value to GDP is the hallmark of this country’s rulers (note – did not say leaders / government). No surprise of shock to anyone – except maybe Squirrel.

plse tell more about the aquaponics, my ears are on end

Sorry, I missed the logic jump from red meat to aquaponics? Please explain

Surely the PIC isn’t buying the feedlot – it must be buying a stake (share) in the feedlot. Is the first par of the story correct?

One can only shake ones head!
At least this proposed racket has been disclosed and the PIC are having to be transparent.
The JSE also has to keep up its end of the bargain and vet new IPOs more stringently.
RMB perhaps have to explain their valuation in this particular case. It would be interesting to see the valuation calculations.

Market statistics probably relate to the pre-Zupta era when folk had money to buy meat. Current trends will definitely show a marked downward trend. Karan probably saw the writing on the wall and are trying to use the capturers to cash in. Seems they are running out of time and will not want RMB involved at all.

Boy, the cadres sure do love their billions, no messing around with a few hundred thousand. For people who are underprivileged and need affirmative action, quotas and employment equity to get ahead, they seem to have no real problem stripping out a few billion for themselves. Then they play victim …. again and again and so we go around and they strip everything bare. There’s a name for it – Africa. Always was, always will be