The book alleges millions of dollars in taxpayers’ money flowed into the bank accounts of spies and Zuma’s government.
By James Macharia, Reuters 3 Nov 2017  18:03 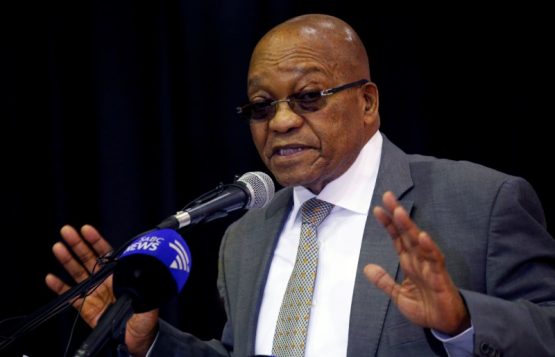 NB Publishers said on Friday it had received a letter from the State Security Agency (SSA) ordering it to pull a new book on President Jacob Zuma off the shelves as it contravened the Intelligence Service Act.

The publishers said they stood by “The President’s Keepers – Those keeping Zuma in power and out of prison”, and its lawyers would respond to the letter sent by the SSA.

The book by journalist Jacques Pauw alleges millions of dollars in taxpayers’ money flowed into the bank accounts of spies and Zuma’s government and details the actions of law-enforcement agencies. It alleges Zuma failed to submit tax returns for the first five years of his presidency.

The president’s office has issued a statement rejecting the accusations contained in the book, adding that Zuma had declared all income received to tax authorities.

The SSA warns NB Publishers in a letter seen by Reuters that it will launch criminal charges if the book is not withdrawn.

“Noting your admission that you did not seek the views of the people apparently implicated, it is not surprising that this book is replete with inaccuracies,” the SSA said in the letter sent to NB Publishers by its lawyers Kgoroeadira Mudau Inc.

The letter said the book contained elements in contravention of the country’s Intelligence Service Act.

A spokeswoman for NB publishers said its lawyers were handling the matter.

“We have received the letter but have not pulled the book yet because our attorneys have been given time to respond,” Jean Pieters, NB Publisher’s spokeswoman said.

You know that the society you live in has reached a level of sophistication when journalists, and not military men, are the heroes of the day. Here we have the true heroes, Jacques Pauw and Max du Preez, fighting in the front lines, putting themselves “in harms way” so to speak, to keep us informed. We can salute them by buying the book(and enjoying the special treats at Red Tin Roof).

Where would our society be without brave, diligent and tenacious men and women like these?

That’s the optimistic point of view. The pessimistic one is that this marks the beginning of a new era of political censorship.

It would be interesting to see the SSA prove all these so called inaccuracies in a court of law. Also they are doing the authors a favour as by bringing attention to this book it is probably going to sell a lot more copies.

Obviously the book is true. That’s why it needs to be withdrawn.

what is the SSA?? first time I hear about this.

It used to be called the NIA = national intelligence agency

Buy it on Kindle, the bookstores were out yesterday and only getting further stock next week. There is also a pdf doing the rounds but one should imho still buy it in hard copy to support the author and the publisher. Let’s see how effective the corrupt gangsters are at suppressing this.

“you did not seek the views of people implicated” LOL
ja right , and how long has skelm nr1 been dodging the courts about his 780 plus
chargesof fraud ? kudos to Mnr Pauw , i salute u sir and will be buying yr book.
i hope it is being promoted os and a few copies sent to the Hague court

Why do you think they call each other “comdare?” It’s because this is not a true democracy. Don’t forget the COMMUNIST leg of the chair !!!

I bought the book today.

Lets support these journalists if they need legal support.

Spread the word to the rest of the world.