Matshepo More said she was in the dark about the breaches of PIC processes that led to the approval of the contentious Ayo transaction.
Tebogo Tshwane  26 Jun 2019  00:44 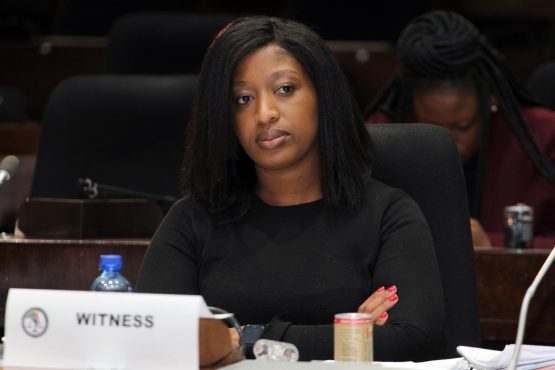 Matshepo More told the commission that Matjila failed to inform her that he had signed an irrevocable undertaking to buy Ayo shares. Picture: Moneyweb

Matshepo More, now suspended CFO of the PIC, has strongly distanced herself from the irregular processes that led to the approval of the Ayo Technology Solutions transaction.

The inquiry heard on Tuesday how More stopped the disbursement of funds in the Ayo transaction and ensured that PIC processes were complied with before the money for the multi-billion rand transaction was released.

The inquiry has heard how the Ayo transaction was in many respects a “foregone conclusion”.

Former chief executive Dan Matjila signed the irrevocable subscription agreement to purchase R4.3 billion in Ayo shares despite the PIC’s investment team raising concerns about due diligence not being done and the deal not being approved by the requisite committee meeting.

On December 19, 2017, a day before the committee was meant to have a sitting, a disbursement memo was signed to approve payment for the deal and among the signatories were Matjila and More.

But in testimony before the commission, More said she signed the memo merely to confirm that there were sufficient funds available for the transaction but not to approve the release of funds.

This is signaled by the fact that she “crossed out the words approval/not approval”, which appeared at the top of her signature.

She further pointed out that at the time of signing the disbursement memo, she was “never involved in any substantive deliberations regarding the Ayo transaction with either the deal team or any signatories of the irrevocable undertaking”. In addition, the undertaking was not disclosed in the memo.

What the memo mentioned was that the portfolio monitoring committee (PMC), which ordinarily approves transactions, would ratify the deal at its next meeting.

“I was labouring under an honest belief that the transaction had already been approved through a round robin resolution of the PMC,” said More.

This because on December 15, 2017, the company secretary had sent an email to PMC members asking them to approve or not approve the Ayo deal in writing through a round robin resolution.

While she did not sign the round robin she said she took the reference to ratify the transaction in the memo as an indication that it had been passed by the necessary majority and only needed to be confirmed at the next meeting in line with PMC procedures.

“I believe that my involvement in the Ayo transaction has been grossly exaggerated and misrepresented by those persons who have appeared before the commission,” More charged.

This comment was mainly in response to testimony given by assistant portfolio manager Victor Seanie, who previously testified that More knew the deal had been concluded when she participated in the PMC meeting held on December 20, 2017, as she had signed the payment memo a day before.

“The evidence that has been presented before the commission by Mr Seanie that I released the funds is plainly incorrect,” said More.

More said after signing the memo she contacted the PIC’s head of Risk Paul Magula to follow up on the transaction where she learned that the round robin wasn’t passed meaning the PMC had not approved the Ayo deal.

Subsequent to this, More said she informed the head of finance to stop any efforts to process the payment memo “until the transaction is duly approved”.

She said when she realised that a step had been skipped prior to Matjila signing the irrevocable agreement she “took it upon [herself] to ensure that there is compliance with PIC processes”.

More facilitated the PMC meeting that was attended by Matjila and Seanie. At the meeting, she said the individuals who were aware that the irrevocable undertaking had been signed did not disclose this fact to the meeting.

The PIC’s delegation of authority for strategic investments in listed equities stipulates that the CFO and CEO must approve investments between R3 billion and R10 billion before they appear before the PMC.

According to More while that’s what the procedure highlighted on paper there was no established practice of involving the CFO in approving investments and therefore Matjila had no “obligation” to inform her that he had signed the irrevocable undertaking.

More could not provide details on how long the procedure had not been complied with but said it had been amended in April 2019 when the board took a resolution to approve the revised delegation of authority that removed the CFO’s involvement in listed transactions.

She explained that the previous policy was impractical because the CFO and the CEO could not agree with investments because that would affect the consensus of the PMC meeting.

Commission assistant Gill Marcus was not satisfied with More’s explanation saying it was obfuscous. Marcus said that the delegation was set by the board and even if the delegation did not work in practice, the obligation from the board still stands.

Marcus added that here should have at least been some consultation between More and Matjila given the size of the Ayo deal to meet the requirement of the obligation and ensure that both parties are comfortable with it going forward to the PMC meeting.

“There was a total ignoring of the delegation of authority,”  said Marcus

Astounding even by South African standards. It does not matter who is testifying in front of which commission, it’s always the same: I didn’t know, no one told me, it was my deputy, it wasn’t me, I was sick that week, I was overseas when it happened, the dog ate my homework. This is beyond lame. And best of all when all the dust has settled, no one will be held accountable.

while they all were looting merely away.

Well, this type of lame excuse is actually government policy. Unaccountability is the official ANC policy. The president even confirmed this at the SONA recently. He said that nobody is to blame for the bankrupt SOE’s and that “we as a nation must accept responsibility as a collective”. A fish rots from the head and Luthuli House is rotten to the basement.

No commission and no judge can change the fundamental problem of unaccountability. Only the voters can change that, but they are collectivist in nature, so, no solution.

I read your comments everyday.. I come here to Moneyweb for YOUR comments. I wish you were the leader of this nation. I have never in my life heard one person talk so much sense, back it up consistently with evidence and throw about solutions to the problems. It is absolutely phenomenal. Whoever you are, you are truly a Sensei!

Saibotkram1988, I am humbled by your kind comment. I was raised as a patriot, I am proud of my country and I want the best life for all our fellow citizens. Therefore, I speak my mind among this group of individuals who share these same feelings. We have all got skin in the game.

We all make mistakes Matshepo, don’t burry your head in the sand. Learn from this mistake. It will make you a better manager going forward. What happened , is water under the bridge, like they say, can we forget and move on. You look beautiful.