The CCTV system that contributed to a drastic reduction in crime in the heart of Johannesburg is virtually useless following the cancellation of a contract with a service provider and the relocation of the control room, several sources have told Moneyweb.

Photos and video footage that Moneyweb has seen show that Johannesburg’s CCTV cameras are virtually unmonitored and sources say no recordings are currently being made. The recordings of incidents are crucial in prosecuting crime caught on camera.

This includes the CCTV cameras mayor Herman Mashaba launched in Vilikazi Street, Soweto, about a month ago, aimed at reducing crime in the famous street where tourists flock to visit the houses of Nobel winners Nelson Mandela and Desmond Tutu.

In response to questions from Moneyweb about the system Luyanda Longwe, stakeholder manager in the office of the member of the mayoral committee (MMC) for public safety Michael Sun responded as follows via SMS:

“Services of OMEGA Risk Solutions came to an end on April 31. The contract termination date was April 31, No contract is currently in place and the city is in the process with a bid specification process to go out on tender. The IOC centre is managed and monitored by members of JMPD and once we go out on tender the city will appoint a successful service provider to maintain the system. The system assist are officers identifying possible crime in areas were cameras are placed. This is based on stats received from SAPS.” (sic)

The IOC centre Longwe refers to is the Intelligent Operations Centre at the metro police headquarters in Martindale. The CCTV control room was previously located in Rissik Street, but was relocated to Martindale earlier this year.

Longwe maintains the metro police officers monitor the cameras and manage the system at the IOC, but Moneyweb’s sources strongly deny that. Earlier this week Moneyweb saw a live video transmission from the IOC where only one of the 29 consoles was manned. We also obtained these photos: 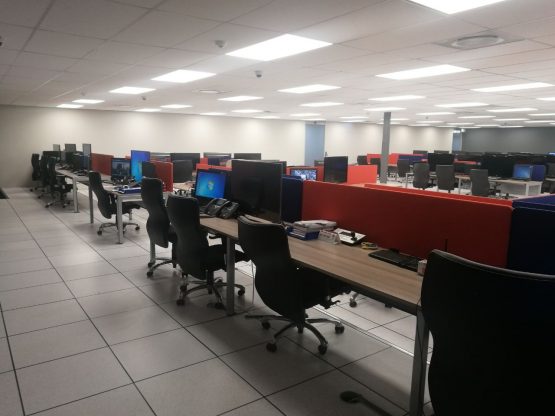 There were no supervisors or on-site metro police presence with the authority to dispatch officers to any incident picked up on camera.

Moneyweb was further told that the fibre infrastructure to connect a large portion of the more than 400 cameras with the IOC has not yet been installed and no service provider has been appointed for that purpose.

Moneyweb has learnt that the cameras, situated in the city centre, Hillbrow, Yeoville, Braamfontein and Fordsburg are often vandalised and infrastructure damaged in vehicle accidents and as a result of construction work. Currently, there is no service provider appointed to maintain the system.

The system was first launched in December 2007 and two years later DefenceWeb reported: “City officials say there are some 240 CCTV cameras in the inner city that have recorded some 46 000 incidents since December 2007, with an average of about 260 arrests made each day for crimes ranging from bag snatching, pick pocketing, cellphone theft, assault, robbery, car hijackings, vandalism and smash-and-grab attacks.”

SABC TV News later quoted former mayor Parks Tau saying crime in the city centre had been reduced by 22%, thanks to the installation of the CCTV system.

The contract was apparently cancelled by the DA administration in an effort to clean up unlawful agreements, because it was extended several times by the previous ANC administration in contravention of the Municipal Finance Management Act (MFMA).

Municipal expert Werner Zybrands says the MFMA and supply chain regulations do provide for the variation of an existing contract and the deviation in case of emergency. He says in the case of an essential service, the administration could have used one of the provided mechanisms to extend the contract for a limited period while taking steps to cure it or award a new, compliant contract.

Director Gerrie Gerneke, who retired from the Johannesburg metro police two years ago and was in charge of these tender processes until his retirement, told Moneyweb it can take up to a year to finalise the award of such a highly technical contract.

Gerneke said the absence of an effective CCTV system certainly impacted not only on law enforcement, but especially on crime prevention in the heart of Johannesburg.

Apart from the CCTV contract, the administration cancelled the on-street parking contract at the end of February due to non-compliance. Longwe told Moneyweb the service provider also defaulted in paying the city its share of parking revenue during the 2016/17 financial year.

The contract provided for parking attendants in the city centre, Braamfontein, Rosebank and Hillbrow.

The aim of the contract was to provide for the rotation of parking bays every day, and prevent shop owners for example from parking and thereby blocking a parking bay for the whole day, leaving no space for customers.

The previous service provider had 300 staff members who were put out of a job. Their departure opened the gap for the return of informal and unregulated car guards.

Longwe told Moneyweb that Terms of Reference for a new tender have been drafted and a meeting with prospective bidders was held last week.

Moneyweb earlier reported that electronic enforcement of speed limits has also come to a virtual standstill in the city since early this year after the city ended contracts with service providers who provided the cameras and generated speed fines.

The city stated that a new tender will be issued shortly.

Mashaba always did seem something of a maverick – hire and fire sort of guy…..

Thank you Moneyweb, now all the moneyweb reading criminals will spread the word around, then shortly all the Douglas Green finger pointing starts, then another commisie van ondersoek at the tax payers expense followed by an appeal to the constitutional court followed by them reserving opinion followed …….

“The contract termination date was April 31”. I guess the problem came up because the payment date was the 32nd of every month.

Mashaba does seem to be a bit gung ho in his actions – why not go out to tender ahead of time so that there is a seamless transition. It all very well if he want to punish the ANC but don’t devastate the citizens of this metro for personal point scoring, otherwise you are no better than the ANC

And here I was hoping that the DA would turn things around like in Cape Town. Sigh …

I suspect that the problem is that the ANC have had a lot longer to loot cash, appoint cadres and tenderpreneurs. It is going to be very tough to turn it around.