The end for ‘baseloadism’ in South Africa In the brave new world of power generation, the old paradigm and approach of dispatching baseload, mid-merit and peaking generation capacity, in that order to meet electricity demand, is being turned on its head.

With the massive reduction in the price of renewable energy from wind and solar photo-voltaic (PV) plant over the last five years to levels now less than half that of energy from new coal and nuclear baseload plant, a new approach to power generation beyond “baseloadism” is emerging. 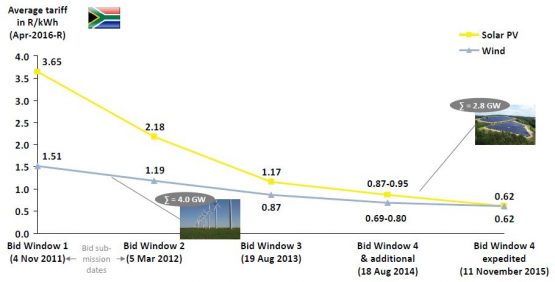 In fact, the cost of energy in South Africa from new wind and solar PV plant is now even lower than Eskom’s average cost of electricity from its entire, aging power generation fleet comprising a mix of coal, nuclear, hydro, pumped water storage and diesel-driven open-cycle gas turbines (OCGTs).

Price of electricity from new generation of various technologies in SA In this new world, it now makes economic and technical sense for electricity utilities such as Eskom to source as much energy from wind and solar PV as possible – limited only by the ability of the renewable energy sector to deliver the planned new capacity requirements, and the ability of the electricity grid to handle this new variable capacity.

International experience and scientific and technical research now shows that to 2050 and beyond, there is indeed no economic, technical or other reason why the significant majority of South Africa’s new generation capacity requirements should not be wind and solar PV, backed up by flexible generation capacity in the form of gas-to-power, hydro, pumped water storage and other emerging energy storage technologies.

A comprehensive study by the CSIR shows that the option of new wind, solar PV and flexible generation capacity delivers the least-cost electricity price trajectory for South Africa in the years ahead to 2050 and beyond, as well as least water consumption, lowest carbon emissions and the most jobs.

In the old world, baseload generation capacity generally came from large coal-fired and nuclear power plants, and from hydro-power plants in those countries having suitable continuous water resources for this purpose.

At that time, baseload power plants produced the cheapest electricity, and their generation units were therefore given preferential access to the grid, and were despatched first to meet demand. They were also expected to run continuously for as long as possible.

This suited the technology of large coal-fired and nuclear power plants perfectly, because by their nature they could not be operated flexibly anyway, and they achieved maximum efficiency and performance when operating continuously at full load.

Ideally, baseload generation units would only be removed from service for planned maintenance and during unplanned breakdowns. Spinning reserve units were kept ready for immediate use in the event of any unplanned breakdown of operational baseload units. Additional reserve baseload units were also available to be swapped with units that were removed from service for planned maintenance outages.

In this way, well-managed power utilities could achieve energy availability factors of 80 to 90% for baseload generation capacity in order to minimise the price of electricity generated.

To meet the usual increase in electricity demand above the continuous baseload level during the daylight hours, somewhat more flexible “mid-merit” generation plant was used.

Although less efficient and therefore more expensive to run than baseload plant, mid-merit plant could ramp up its output in the mornings, ramp down again in the evenings, and adjust output to meet changes in electricity demand during the day.

Finally to meet morning, evening and other demand peaks that could not adequately be met by mid-merit capacity, highly flexible “peaking” generation plant was used. This took the form of OCGT, hydro power and pumped water storage plant with the ability to ramp power output up and down fast to meet demand during short-term peaks.

Using the old paradigm to meet electricity demand in UK

While electricity from peaking plant was expensive to produce, it was only required for short periods, and therefore did not significantly impact on the overall cost of electricity, which was dominated by the lower-cost production volumes of the baseload and mid-merit plant.

With the cost of energy from new wind and solar PV now dramatically lower than that of new coal or nuclear power, the new approach to meet growth in electricity demand at least cost in the years ahead entails sourcing and giving preferential first grid access to as much energy from wind and solar PV generation plant as possible. In this way, the average cost of electricity produced is reduced. South Africa is a relatively large country with a well-developed transmission grid, and exceptional and widespread natural resources of wind and solar irradiation.

South Africa’s outstanding solar resource is well known, and recent research by the CSIR has also shown that 70% of the South Africa’s land area can deliver wind power capacity factors of greater than 35% if wind turbines with up to 140 m hub height are installed, and that more than 50% of the land area can achieve these very high capacity factors if hub heights are limited to only 100m.

Furthermore, while solar power is generated only in the daytime hours, South Africa’s wind resources produce power 24/7, with varying output, and with some pick-up in the evening hours during nine months of the year.

This makes the country’s wind and solar resources significantly better than those of most countries of the world.

The variable output of wind and solar PV plant – which is affected by wind patterns, the length of daylight hours and the weather – is dealt with to a significant degree by siting wind and solar PV plant widely across the country at a number of identified renewable energy development zones (REDZ), as close as possible to major areas of electricity consumption.

The remaining variability in average output from the distributed wind and solar PV plant is backed up by “flexible” power generation sources such as open and closed cycle gas turbines, together with local and imported hydro power, pumped water storage and other emerging energy storage technologies.

This new approach to power generation not only ensures operational flexibility, but also provides construction flexibility in small chunk sizes to meet the uncertain future demand for electricity, using simple, proven technology that lends itself to localisation.

Short, reliable and proven construction times eliminate the risk of cost and time overruns associated with complex coal and nuclear mega-projects, reduce the risk of future demand uncertainty, and avoid the need for long-term contractual commitments with foreign countries and governments.

Interesting space we are in now, Africa has fantastic renewable resources. The only question is where is the gas going to come from and is the Government ever going to play ball with what makes the most sense in the long term. Inherently the ANC have proven they can be pretty poor at long term energy planning.

Fantastic article and food for thought!! Pity that the powers that be will most probably refute this as heresy and not go there- logic and science does not belong in politics.

The article is based on a very interesting, useful, and nicely presented presentation by the CSIR.

Just one problem: the discussion of the available technology is outdated!

There is no mention – at all – of Concentrated Solar Power with Storage.

This technology is a game changer wrt solar power because it allows base load power production on a 24 hour basis.

Essentially, heat from the sun during the day heats up molten salts which transfer this heat to water to produce steam that drives conventional steam turbines and electricity generators to produce electricity.

The novelty of the new process is that there is such a large reservoir of this heated molten salt, that the heat in this reservoir can continue to be tapped to make steam LONG after the sun has gone down.

Solar Reserve, the US company pioneering this technology is currently building the 100 MW “Redstone” plant at Postmasberg in the Northern Cape. This will produce full base load for a further 12 hours after the sun goes down (quite unlike normal PV, which falls away as soon as the sun goes down unless backed up with expensive batteries).

Perhaps Chris Yelland can look into this, and update this article wrt the latest news about the Redstone project. It was supposed to come on line this year, but there has been no news of late. 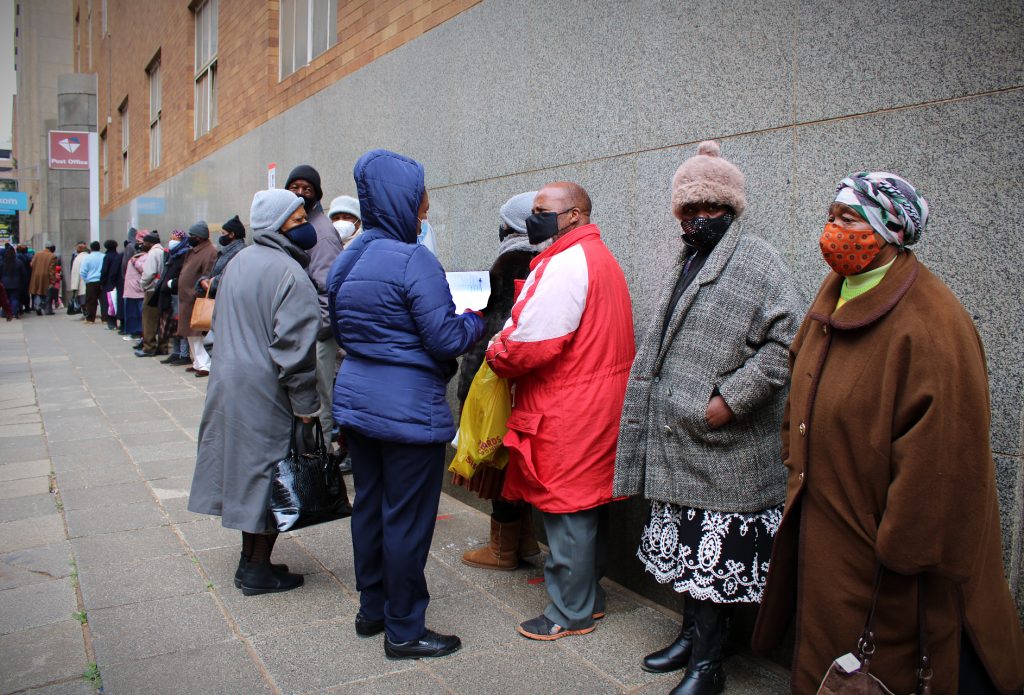 ‘We are not forcing anyone to pay the money. We are creating jobs for ourselves.’ 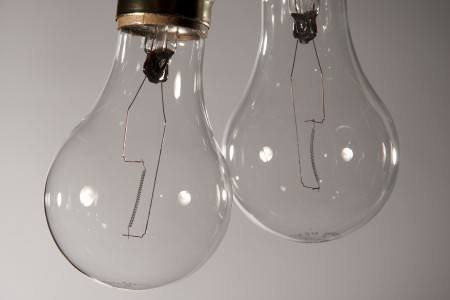 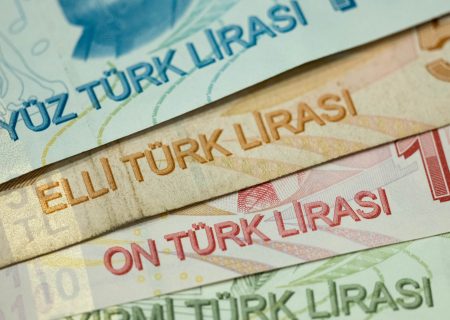