Just about everybody seems to be offering cover for end-of-life ceremonies in South Africa these days.
By Roxanne Henderson and Loni Prinsloo, Bloomberg 24 Jul 2021  00:01 A wall hoarding about 20-meters tall with an advertisement by South Africa’s oldest burial house, Avbob, looms over people entering downtown Johannesburg. “Standing strong for our people. We are here for you. Since 1918,” it reads.

In the city centre, which was among sites hit by last week’s unrest, there are signs for funeral-cover packages everywhere in the midst of hawkers selling chicken kebabs, corn on the cob, electronics, fresh fruit, clothes and wigs. In a store front, employees of insurance company Two Mountains said its agents across the city have been handing out flyers with plans that include a “prince dome cherry casket.” Across the street, a grocery shop has a sign in the doorway offering funeral insurance for as little as R2 ($0.14) a day. Airwaves are flooded with burial-cover ads and supermarket chains like Shoprite are bombarding clients with offers of funeral help to shop with them.

Just about everybody seems to be offering cover for end-of-life ceremonies in South Africa these days — from small-time players like Two Mountains to the country’s biggest banks, mobile phone companies and retailers. With Africa’s most developed nation recording one of the world’s fastest pace of deaths from Covid-19 infections, large swathes of the country are being deluged with offers of burial insurance. While the protests last week following ex-President Jacob Zuma’s incarceration on contempt-of-court charges drew attention away from the rising infections in the third wave of the pandemic, the high rate of deaths in Gauteng, the industrial hub that includes Johannesburg and Pretoria, is once again raising concern. Funeral parlours are worried they will run out of coffins. Officially, 67 080 people have died of Covid in South Africa, but excess deaths — seen as a more accurate way of gauging the impact of the pandemic — stand at about three times that.

Elaborate burials are something of a status symbol in South Africa, and the immense social and cultural pressure to ensure a burial is in keeping with one’s station has spawned a burgeoning industry for funeral insurance. It is the most-popular category in the country’s estimated $48.3 billion insurance sector. Research at South Africa’s third-largest lender, Absa Group Ltd., shows there are no signs of that demand abating.

“Trying to get money together when someone dies is very difficult,” said Leigh Petersen, a 24-year-old who lost her job last year and shopped around for options to provide cover for herself, her mother, brother and son. “Even though I am young I wanted my family to be covered, because things happen unexpectedly. The coronavirus was also a cause of me having funeral cover on my mind more.” 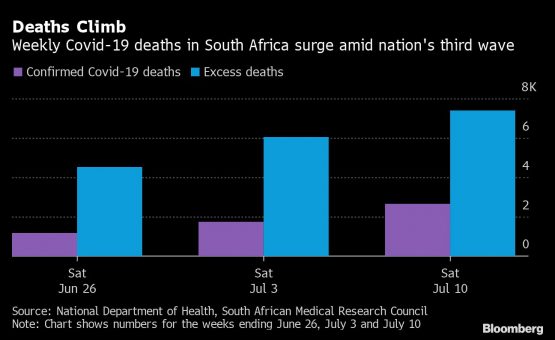 Even before the pandemic, planning a socially befitting funeral was a preoccupation for South Africans. At 13% of the annual average wage, funeral costs in South Africa make it the world’s fourth most expensive country for dying, after Japan, China and Germany. Although many countries — from Australia and Canada to France — offer funeral cover as part of life insurance packages, in South Africa it’s a cultural imperative.

“If they’ve got a rand to spend they are spending more on funerals than any other product we have at the moment,” Old Mutual Ltd. Chief Executive Officer Iain Williamson said of the company’s mass-foundation offerings. Eugene Strauss, managing executive for Absa Group’s life insurance cluster, says funeral cover is a primary driver for most customers for other life insurance policy sales.

From a belief that the dead are spirit ancestors who exert an influence over the fate of the living to a sense that the final send-off reflects a family’s standing in the community, the pressure to have flashy funerals is immense in South Africa. In a nation with about a third of the working-age population unemployed, that hits the poor particularly hard. People often borrow to keep up funeral-policy payments, said a report last year by Black Sash, a human rights organisation.

“The cost of funerals in South Africa is not driven by wealth,” said Pieter van der Westhuizen, general manager at Avbob, the country’s oldest mutual burial society. “The cost is being driven by cultural expectations. Every community has its own idea of what a funeral must look like.”

Funerals in the country can be opulent. Red carpets leading mourners to the gravesite, arches of flowers, poster-sized photographs of the deceased, fancy tombstones and a sumptuous feast — with several sheep or a cow slaughtered and served with rice and vegetables — are often part of the program.

At Vuyo’s Funerals in Soweto, a township south of Johannesburg, a top-of-the line burial can cost about 200,000 rand, with a high-quality coffin, elaborate flower arrangements, limos with chauffeurs, a hall, a catered feast, music, TV screens, professional performances and other services. A basic insurance policy for a standard-package funeral with about 15 people at R5 000 per person costs about R185 a month and assures a no-frills service with groceries thrown in. It can be upgraded with something called “inkomo,” or cow, and pays for meat to feed mourners. Vuyo Mabindisa at his funeral parlour in Soweto, outside Johannesburg, on June 24. Photographer: Waldo Swiegers/Bloomberg

The funeral home’s owner, Vuyo Mabindisa, says he’s glad he broadened the burial business his grandmother started in 1967 to include funeral insurance 15 years ago. “I could sell more policies than the amount of people I could bury and started shifting to financial services,” said the 50-year-old, whose firm now counts 30 000 primary policyholders. “We are not selling funerals; we are not selling death,” he said. “We give a lifestyle send-off.”

The importance of funerals has given rise to a large funeral-services industry of undertakers, mortuaries, cemeteries and crematoriums, manufacturers and suppliers of funeral products, transporters of human remains and embalmers. While there are some big players in the market like Avbob, the industry is mostly made up of small businesses serving very local markets. That goes for funeral insurance, too, and the segment’s explosive growth has come with its share of abuse, raising concerns unscrupulous service providers will prey on the financially illiterate.

The business has lured criminals taking out cover for people who don’t exist, or buying and renting corpses to obtain fake death certificates, according to the forensic departments of life insurers. It has also drawn illegal or exploitative insurers who take advantage of the poor or the uneducated with clauses they don’t always understand, enabling the service providers to repudiate claims. Attempts to generate new business can sometimes snare unsuspecting victims into inappropriate policies.

“Death is a business… and undertakers in townships provide funeral cover with funny rules that are highly questionable from an ethical perspective,” said Jonathan Walton, a senior paralegal at Black Sash. The regulatory authorities “are not doing enough to protect poorer households from exploitative business practices.”

Even established companies haven’t escaped scandal and ignominy. In 2019, Old Mutual suffered a blow to its reputation when beneficiaries of a funeral policy brought a corpse to one of its branches to hasten the payment of a claim. The family was outraged that rounds of assessments meant rituals couldn’t be observed in a timely manner. Lion of Africa Life Assurance Co. targeted poor parents by setting up deductions from their child-welfare payments for funeral cover. The case triggered new regulations preventing deductions from children’s grants.

Still, with locals hankering after more funeral insurance — even if they can’t always afford it — new entrants offering services are popping up every other month.  Margins are small, premiums are low and the battle for business is fierce. “There’s a lot of competition coming in and everyone sees this as the place to be,” said Warwick Bam, head of research at Avior Capital Markets.

With profit margins on funeral insurance of between 3% and 7%, according to Melusi Baloyi, an actuary, volume is key. So being cheap and flexible is what many recent entrants such as Capitec Bank Ltd. and telecommunications giant Vodacom Group Ltd. highlight in offerings. Vodacom sells a R2 500 cover for 3 rand a week, while Capitec, which now sells about a million policies a year, charges R25 a month for coverage worth R5 000 bought through its digital channels. The bank earned R650 million on its funeral product in the year ended February.

For all the rush to get a piece of the business, high payouts during the pandemic may hit some companies hard, Kuben Naidoo, deputy governor of the South African Reserve Bank and CEO of the Prudential Authority, said in an interview.

“If the third wave has a death rate as high as the second wave I think you may have many insurance companies — the bigger ones would have to raise provisions — but many of the smaller ones that sell funeral plans may be under water,” he said.

A funeral is nothing but waste disposal. Cheapest coffin, cremation, done.
Remember the loved one, not the funeral.

What happened to all the people saying “but people due from the flu toooooo”?

Pure profit after 27 months ? Nice business if you can get it.

Perhaps ‘thrown in’ is an unfortunate choice of words in this context !

They only offering what the people want……. It’s a free market….. Not matter how retarded it is….. The people have the authority to decide… And along with that authority comes a responsibility to deal with the outcome. Personally I want nothing more that a cardboard box….