The looting of Eskom, Transnet and SAA by the Gupta media enterprise 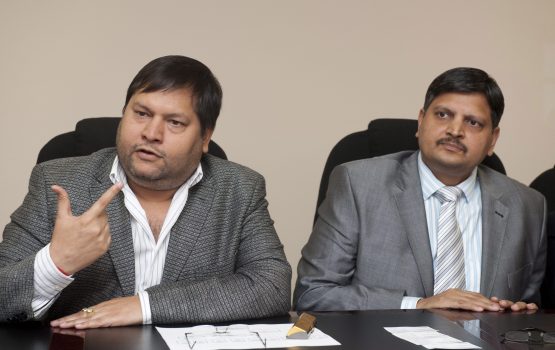 The second section of Part 1 of the Zondo State Capture Report deals with the looting of Eskom, Transnet and SAA by the Gupta media enterprise, The New Age (TNA) Newspaper and the New Age Business Briefings, between 2011 and 2017.

Millions of rand of public funds were siphoned off from these public entities.

The facilitators, the followers, and the resisters

The commission identified the players in these categories:

The Zondo Commission noted that former president Jacob Zuma “could do terrible things to give effect to the wishes of the Guptas”, for example:

The commission heard that Ajay Gupta became hostile when Maseko rejected his demand to divert the government advertising budget to New Age newspaper, and that the Guptas “could summon any Minister who did not co-operate”.

The commission found that Minister Baloyi orchestrated the replacement of Maseko by Manyi , and declined to comment on “whether the irregular removal of Maseko and the irregular transfer of Manyi facilitated State Capture”. Baloyi disregarded lawful and proper procedures. Mzwanele Manyi, the former head of the GCIS. Image: Moneyweb

During Manyi’s tenure from February 2011 to August 2012, the GCIS paid some R6 million to TNA.

Manyi was unable to justify to the commission how GCIS could spend millions “on a media business that had no established readership or certified circulation figures”.

The commission found that under Manyi’s tenure the GCIS “was an enabler of state capture”, whereas Maseko “would likely have resisted the Guptas’ incessant pressure on government departments to divert their media spend to their business”.

Five witnesses gave oral evidence to the commission: Zola Tsotsi (chair of the Eskom Board in 2011 until the end of March 2015); Mark Pamensky (member of the Board from December 2014); Mafika Mkhwanazi (non-executive director from June 2011 to December 2014); Pieter Pretorius (responsible for strategic marketing at Eskom) and Chose Choeu (divisional executive responsible for marketing).

Read: Newspaper formerly known as The New Age to close

The R43.2 million contract constituted fruitless and wasteful expenditure, gave Eskom no value, and former Eskom CEO (Collin) Matjila was not authorised to sign it.

Choeu alleged that former Eskom CEO Brian Dames had instructed him to agree to an additional ad-hoc arrangement as former Public Enterprises Minister Malusi Gigaba would be speaking at a TNA breakfast. A SizweNtsalubaGobodo (SNG) report made findings against Choeu, but Choeu was unaware of this and stated that no such disciplinary action was ever taken against him.

Pamensky, who was also a director of Gupta affiliated Oakbay Resources and Energy when he joined the Eskom board in 2014, ratified a contract he had not seen.

Read: Were the Guptas the disease or the parasite?

The commission found that the enablers and facilitators bypassed the correct procedures, and “gave false justifications to the Public Protector and Parliament for expenditure that was nothing short of wasteful”. In addition, the 2014 Eskom Board disregarded its fiduciary duties and “put the interests of the Guptas above those of Eskom and the people of South Africa”.

The commission heard evidence from three witnesses in respect of TNA’s contracts at Transnet:

The commission concluded that Brian Molefe, who was appointed as the new Transnet Group CEO on 16 February 2011, and Mboniso Sigonyela, the general manager of Transnet’s group corporate and public affairs, directly facilitated the use of public funds for TNA spending, “on extremely disadvantageous terms for Transnet”.

It added that Sigonyela “used threats and intimidation to ensure that his subordinates complied with instructions to advance the interests of TNA. The expenditure incurred on these contracts was irregular, fruitless and wasteful”.

And the flow of Range Rovers, Porche’s , Beemer’s, etc, driven by people that cannot spell their own names, continues unabated!

Hell, one clown even took his Range Rover for a swim in the bathing area in Richards Bay a few days ago! Easy come, easy go, on Taxpayers money!

The Guptas captured the SOEs while the ANC captured the legislature. The law can still act against illegal plunder but the law protects legalized plunder. Our biggest problem is not the findings of the Zondo Commission. The system that enabled the plunder, the system that led to the formation of the Zondo Commission, does much more harm to the economy than the guys who appear before the commission.

The Guptas are merely a manifestation of the mindset of the average voter. The Guptas are entrepreneurs who understood their clients. The voters enabled state capture. The voters created the Guptas. This is typical of any collectivist system. The Zondo Commission merely describes the process that leads to the inevitable collapse of all collectivist states.

There are no words to adequately describe the debacle that South Africa has become.