The recovery in listed property still has momentum, Metope says

The specialist manager believes that local Reits have proven to be more resilient than the market was expecting, and there is more upside to share prices despite the difficult environment.
By Patrick Cairns, Citywire 30 Jun 2021  15:34 For South African listed property companies, last year was ‘horrid’, according to Metope Investment Managers CEO Liliane Barnard. In many ways, landlords bore the brunt of the economic impact of 2020’s lockdowns.

In an interview with Citywire South Africa Barnard said that when shopping malls and offices were effectively closed, listed property companies responded by offering extensive support to tenants in the form of rental discounts and deferrals.

Research by Metope suggests that ‘listed property landlords have to date provided upwards of R3 billion in relief’. The majority of this is unrecoverable.

‘Around 80% of the relief provided was in the form of non-recoverable discounts, which together with increased provisions for bad debts, caused an unprecedented knock to property revenues and ultimately dividends to shareholders, but was deemed necessary to prevent a larger fall-out in terms of tenant failures and sharply higher vacancies over the short- to medium term,’ Metope said in a research note. As a result, JSE-listed Reits were heavily sold off last year as investors believed there was a risk that many wouldn’t be able to survive.

‘There was a lot of fear that valuations would collapse, that banks would be calling in loans, and that property companies wouldn’t have enough liquidity to settle those loans,’ said Barnard, who manages the Metope Property Prescient fund. ‘But none of that has happened. Companies have been able to roll over or settle bank debt and corporate bonds, and covenants were temporarily relaxed in certain cases and ultimately have not been breached.’

She added that, ultimately, the sector as a whole has proven to be ‘resilient’. In particular, companies that needed to shore up their balance sheets were able to do so either by raising capital or holding back dividends.

Aimee Glisson, director of operations, performance and risk at Metope, added that where Reits had disposed of assets to raise capital, they had managed to do so at reasonable prices.

‘The market was thinking that those that were able to sell would have to do so at massive discounts,’ Glisson said. ‘But sales have been at or close to book value.’

Ultimately, balance sheets across much of the sector have not been severely compromised. Metope’s research suggests that loan-to-value (LTV) ratios have only deteriorated slightly. 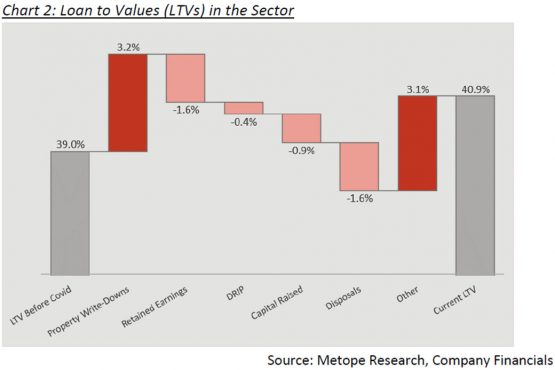 ‘We estimate that the 17 largest South African Reits (accounting for 95% of the local sector by market capitalisation) have retained over R12 billion in earnings through the implementation of pay-out ratios (R10 billion) and dividend reinvestment plans (R2 billion),’ Metope wrote. ‘In addition, we have seen disposals of around R13 billion, with capital raised through rights issues at only R5 billion (R4.3 billion of which was raised by Growthpoint alone). In the context of the asset base, the above measures would have the effect of reducing LTVs by 450 basis points.’

This has offset some of the increases in LTV ratios due to write-downs in property valuations and other listed holdings.

The market has already responded, with many Reits re-rating in recent months. However, Glisson believes the resilience property companies have shown is still not fully priced in.

‘A year ago, the market was priced for decimation and massive failures,’ she said. ‘I think results have now surprised to the upside, particularly in retail.

‘So, there has been a recovery in the last six months, but we’re still a long way off the peak. We have set a very low base and companies have surprised with how resilient they have been. I think there is still some momentum to the recovery as confidence returns.’

That doesn’t, however, mean that the outlook is entirely rosy.

‘The longer-term picture for the recovery will depend on how well the economy recovers,’ said Barnard. ‘We think the fundamentals will still be very tough for the property sector for the foreseeable future. Rentals will be under pressure, and vacancies will continue to rise.

‘That is what is happening in the physical property market. But the stock exchange is a different market. The recovery there is about investors regaining confidence that this sector isn’t about to fall over.’

She added that the crisis has also forced property companies to innovate, and this will have positive long-term impacts. B-grade office buildings that have lost tenants will have to be converted, which could create opportunities for flexible workspaces, hotels or residential units. This could change the environment of a centre like Sandton.

Malls, which relied heavily on their entertainment appeal through offerings like cinemas and food courts are also going to have to find new ways to attract consumers. An example of where this is happening is the EGG store in Cavendish Square – an omni-channel retail experience launched by the founders of YDE.

‘What YDE did for clothing designers, EGG is now doing for SME retailers in a really interesting department store-type setting,’ said Barnard. ‘They have created a great space for entrepreneurs without the prohibitive start-up costs of traditional retail. They pay a few thousand rand a month for shelf space, and that comes with an operation that does all of the retailing, payment and fulfilment of online orders.’

Vukile has also been looking at an entrepreneurship incubation programme at its shopping centres.

‘It will allow small businesses that are predominantly selling via social media to build a physical presence too,’ Glisson said. ‘I think we’ll see some great innovation out of this crisis.’

This article was first pubished on Citywire South Africa here, and republished with permission.

The long tail effect is still coming when existing leases come up for renewal. Office space is due for 40% drop in space needed just from work-from-home. Some retail groups will consolidate number of outlets. Industrial is probably flat in volume but declining in rent per square.

the new and infilled leases will change valuations massively. And of course operating results.

The real market correction worldwide is still to happen, so sit tight for much longer still.

True, ‘listed property landlords have to date provided upwards of R3 billion in relief’. However, the real funders of the relief were shareholders, who received no or very little dividends from their Reit investments. Very little is being written about the plight of pensioners who rely on their Reit dividends to survive.