The commission recommends that law enforcement agencies must act.
By Barbara Curson 5 Jan 2022  01:37 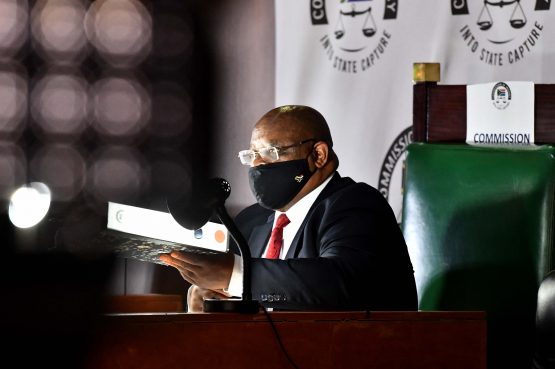 The Judicial Commission of Inquiry into State Capture Report will consist of three parts. Part 1 was released by The Presidency after 19:00 on January 4, and runs to 874 pages.

It includes a summary and analysis of evidence and recommendations in regard to:

This article will only cover the findings and recommendations made on SAA, SAAT and SA Express. An article covering the rest of Part 1 will follow shortly.

Read:
Why did PwC not identify corruption at SAA?
The NPA should investigate the allegations against Dudu Myeni

The commission found that:

The commission recommended that:

All the commission can do is recommend. The law enforcement agencies are tasked to act on the recommendations, timeously and properly conduct their investigations, and prosecute those who have committed crimes. Justice must prevail.

Well … Well, the scope of this must surely and finally force this Govt. to admit the determination, across the board, for theft, corruption and lies. Ineptitude is not even an excuse any longer … theft is theft. No prosecution thereof can only mean Govt. acceptance of theft in office.

“The commission recommends that law enforcement agencies must act.”

The average South African could have told you that 4 years ago and saved the State some 2 billion Rand. The NPA cannot act, it is simply incapable of doing the work. The loss of competent officials and the absence of institutional memory by definition precludes any success.

The average citizen has lost all faith in the institutions of State. They are only there to serve the elite and their cronies. The rest of us are up the creek without a paddle.

You just cannot believe this BS.
They spend 4 years of investigations and then when finally the do a report they recommend investigations!!
WTF – Whilst the ANC is in power it is a time of no consequences !!
God help us all !!

The time has come for a more determined action based assault on corrupt activities. In my view, this commission is the embodiment of wasteful and fruitless expenditure.

Indeed – spending 4 years at very high pay rates and in luxurious surroundings to report that people should do their jobs! INSANITY

This entire mess is a charge against a system. The evidence before the commission is an indictment against the system that allowed, enabled, and rewarded this grand-scale looting by the most unscrupulous members of society.

When the “accountability lies with the collective”, “the land belongs to those who work it”, the resources are shared in a “developmental state” and “the economy is transformed to serve all the people”, as stated by the Freedom Charter and the ANC Manifesto, it opens the door for the scum of society to rise to the top to exploit and plunder the common resources.

This type of situation plagues all collectivist systems because the system itself incentivizes moral decay, criminality, looting, arrogance, mediocrity, incompetence, inefficiency, pretentiousness, victimhood, and plunder. Collectivism eventually bankrupts every state that implements it.

The system of property rights automatically enforces accountable and responsible behavior patterns because the cost of errors is assigned to the owner and not externalized to the rest of the nation. The collectivist system, on the other hand, privatizes the proceeds of corruption in the hands of criminals while the cost is nationalized and shared by the nation.

The situation as described by the Zondo Commission is the logical consequence of what happened in 1994. The onset of democracy under the leadership of a socialist organization always guaranteed to deliver the testimony before the Zondo Commission. The rainbow has been stolen.

The names before the commission are irrelevant. These names merely managed to be in the right position at the time. They were the winners in the race to the top of the looting spree that took the nation to the top of the unemployment rankings.

When the commission removes them, the next person in line will rise to the top to proceed with the looting spree. The previous minister of health had his hands in the till even while the Zondo Commission was sitting. The commission cannot end this ongoing disaster, only a regime change can. We need a political-economic system that delivers accountability and incentivizes the proper behavior patterns. We need to privatize all SOEs and municipalities.

The ongoing faction fighting within Luthuli House is about unscrupulous people jostling for positions in the ANC ambush for taxpayer money. Nobody in this system is innocent. Those who did not steal are waiting for their turn. Only criminals support a criminal organization. Law-abiding citizens don’t belong to the Mafia.

And yet this guy has the same vote value as you or I in the next election.

Where is the logic? The only way SA will become viable is with a qualified voting system with points based on property ownership, education, salary and a bank account.

Otherwise the power of your and my vote is laughable.

So you are suggesting we create another collectivist group based on social class and further increase the gini coefficient? Perhaps the better way to go is upskill the potential voters to increase economic activity n stabilise govt. Yes we may be angry with the current govt but being emotive may not have the desired effect

Four years and two billion Rands later Dear Cyril gets handed what the collective media, journalists and writers who have published many books could have given him three and a half years ago.

And now for the drawn out court cases costing even more as the musical chairs dance begins.

Agreed — The circus of the thieves and deception will continue ad nauseum!!

What a joke, unfortunately it’s on us!

Between Moneyweb’s and Daily Maverick’s investigative journalism alone, all this info was made available before the Zondo commission started!

Only a largely incompetent and standard-less Nation accepts this nonsense!

SARS will inflict more damage much faster than any further investigations by any prosecuting authority.

Crooks don’t declare their illicit gains. SARS does not need to prove the underlying crime, merely that the cashflow was not reported. 300% penalties plus interest plus jail sanction.

What is so tragic, is after billions wasted on the “Zondo Show” which was just theatre for the people, to create the illusion that individuals (right place wrong time) would finally be brought to book and something was being done – is that they just recommend further very costly investigations by other far more scattered organisations, which will take years again and of which we all know nothing will come of.

This commission and the report/s are the right hand – what is the left hand doing?

I look at our most critical SOEs on a daily basis. By critical i mean the ones that keep the country functioning. ESKOM/ TRANSNET etc – when you combine these and their current performances – There is a trick governments all over the world play continually and it generally goes along the lines of something most will know well – the greatest trick they can ever perform is the one where they convince most that the suspected evil/ corruption does not actually exist, or that it has now been flushed out of the system. When Zondo started everyone was – hey these “criminals” will finally be brought to book – really!? Many are still running very profitable businesses related to the positions they were fired from via proxy – allegedly of course?

I mention only 2 SOE`s above because if they fail, then so does the state. Add onto them our water system already failing and hundreds of bankrupt municipalities etc. Recent events like the inexplicable banning of cigarettes…

In my opinion the Zondo commission was theatre and was created to give the impression that State Capture no longer exists – a political pacifier. When in fact even the man in the street can see that looking at the evidence in front of them, that is available – the State remains very much captured and at a much higher level than when it was just about 2 names in the press on a daily basis…. i doubt i am alone in my thinking…