These charts show how much trouble Eskom is in

Eskom lost at least R25bn in the year through March and isn’t generating enough cash to service both its interest and debt repayments.
Paul Burkhardt, Michael Cohen and Antony Sguazzin, Bloomberg  1 Jul 2019  06:46 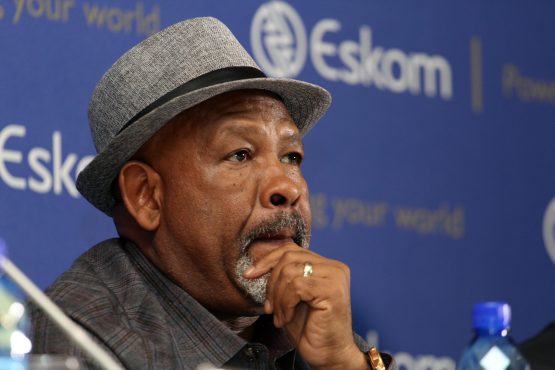 Eskom has more than R440bn of debt, about R250bn more than chairman Jabu Mabuza says it can afford to service. Picture: Moneyweb

South Africa’s government is putting the final touches on a R230 billion bailout package intended to get its debt-stricken state power utility back on track.

Except it won’t be nearly enough.

Eskom, which supplies about 95% of the electricity used in Africa’s most industrialised economy, has more than R440 billion of debt — about R250 billion more than chairman Jabu Mabuza says it can afford to service. The government aid, which will be dispensed over several years, will mostly be swallowed up by ongoing losses.

Eskom lost at least R25 billion in the year through March and isn’t generating enough cash to service both its interest and debt repayments, even though it has secured rate increases of more than 500% since 2007, according to Anton Eberhard, a professor at the University of Cape Town who sits on a government task force advising on a rescue plan. The utility, which is due to release results next month, has endured years of mismanagement, massive cost overruns at new plants and a bloated wage bill.

In addition to the rising operating costs, Eskom needs to invest billions of dollars in new capacity to meet rising demand and replace obsolete plants — while simultaneously spending huge sums on reducing its environmental footprint.

Eskom is engaging with the government about the structure and timing of its proposed support, the utility said in an emailed response to questions.

These charts show the extent of Eskom’s problems: Eskom expects its annual operating and maintenance costs to increase 17% over the next five years. The costs of fuelling its mainly coal-fired plants will probably surge about 50% over the period. The National Electricity Regulator granted Eskom permission to raise tariffs by an average of 7.6% in each of the three years through March 2022, just over half of what the utility asked for. Power prices in South Africa have climbed by more than double the inflation rate over the past decade. Eskom employs about 48 600 people, up from 32 600 a decade ago. The utility says it has about 16 000 more workers than it needs, while a World Bank study published in 2016 found it was potentially overstaffed by 66%. Job cuts are a thorny issue: They are opposed by the country’s power labor unions, which played a key role in helping President Cyril Ramaphosa win power. 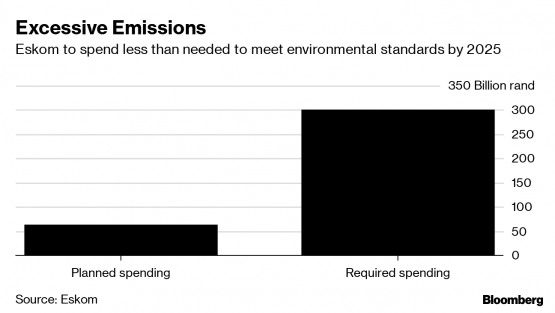 The utility says it would take R300 billion to comply with emissions laws by 2025 at all of its coal-fired power plants — excluding six that it plans to decommission by 2030. But it has committed to spending just R63 billion. Eskom will utilise comparatively less expensive equipment to reduce its emissions of particulate matter and nitrogen oxides, and won’t install flue-gas desulfurisation units needed to reduce sulfur dioxide production, other than in two new plants that are under construction.

The title just sounds a little too click bait for my liking.

Now, with that out of the way.
Eskom is headed full steam into a brick wall, it might not happen as soon as people think, but it is inevitable.

The only way this country can move forward is if we change our political system so that the 4 different main race groups each have a 20% equal representation in parliament and a 5th group for those who do not feel
they belong in the other 4 like e.g. Asians also have 20%. Within each 20% grouping, you can have different political parties but essentially one race group can never dominate the other. This current system where the one
group who can make the most babies controls all levels of society doesn’t work. America took its democracy model to Iraq and Afghanistan and it simply didn’t work there. There can’t be just one political model which applies to the whole world. We have some bright mathematicians in SA who can work a formula out.

FwDeklerk did us NO favour and the NP/CP were actually working toward a confederation system which is exactly what you are talking about and the same system is implemented in Canada with much success. America bringing democracy to other countries is the worst thing that can happen. AS you say the list is IRAQ,AFGHANISTAN,UKRAINE,SOUTH AFRICA,RUSSIA(until Putin fixed it)…….go also look at the history of the US empire even to the United Fruit company from 1890 in central america where the CIA was formed to look after US company interests and cause civil wars that caused millions to Die if that countries president didnt want to play ball. The ESKOM debacle is a planned state of affairs exported to us as part of democracy which is what ENRON did with energy companies in the USA.

I’ve got the best formula for you. How about you go to Europe or Asia and apply that 20% formula? Sounds good?

The problem with South Africa’s democracy is that it is politically party based. Their is a golden spoon for the winning party and it’s members.

We need to a have a decentralised democracy, think blockchain technology. You as a citizen vote and can get voted for but the closest nineteen people in the area you live, this expands as you the rounds of voting go on, you get a second voted provided you where the winner.

This way the people directly linked to their area where you live will govern. And we should no just have 1 president but a 9 council members of presidents who hold Goverment departments to account and approve new laws.

No direct competition means no corruption.

Eskom is having the same problem that City of Cape Town has with water. Their pricing model is based upon consumption, but they then restrict consumption because they are not capable to meet demand. I foresee that we are headed towards levies to prop up Eskom similar to what the City of Cape Town had to do due to the lower water consumption.

To summarize you do not fix a leaking bucket by putting more water into it.

Transformation in action. Ramaphosa went to the G20 cap in hand to ask for “Investments” (read handouts). If received they will “transform” it as it wont be allowed that anyone else but Africans “own” the economy.

Seems most leaders ran for the hills when they saw him coming.

None of the charts show debt service outflow per year on current debt? But on flip side the charts seem to want to cover each year’s capex from revenue. Is depreciation not in opex also?

When can we expect the March results of Eskom? Audited- with the accounts receivable recovery properly valued. Its July…we are waiting Comrade Pravin Zupta Gordhan. (disgusting individual who broke the competent and decent CEO Hadebe with his vote buying no retrenchment orders from the politburo)

If Eskom can’t retrench and wind down because of the government, individuals and companies will do it for them with self generation.

The “utility” say’s it has more people than needed. Yet they don’t fix the problem.

It is like all the other problems they have. They talk about it and do nothing about it.

It is beyond fixing now.

The average wage of the extras equals the annual loss just posted.

Without those extras Eskom may have broken even.

what does your gut tell you?

Oops, sorry forgot about the evil unions, no retrenchments, so same if not bigger loss next year plus debt service costs.

Shortly maybe 46000 out of work, instead of 16000 who would be absorbed into the IPP program.
what could go wrong?

It does not matter how much taxpayers money the ANC use to try and fix Eskom, they will never get out of their mess unless they get their operating costs aligned with income, to many consumers and to little contributors.

Short summary of the damage done by Eskom:

A house could have been built for everyone, with all the money lost in Eskom.