Anticipated announcement of one new development has already been put on hold.
By Suren Naidoo 9 Jul 2019  00:19 Concerns have been raised that the restructuring and associated job cuts at struggling sugar and property group Tongaat Hulett could stall developments north of Durban and along the burgeoning KwaZulu-Natal North Coast.

Tongaat Hulett is one of the biggest single landowners in the province, with large tracts of land from Umhlanga to the area surrounding King Shaka International Airport and Dube Trade Port, and further up the North Coast as far as Tinley Manor.

Since 1990, its conversion of agricultural land into commercial and residential property projects has seen the company and its affiliates facilitate investments of more than R70 billion in the region. Its major ‘master-planned’ property development projects include the Zimbali Resort, La Lucia Ridge, the Umhlanga Ridge New Town Centre surrounding the expansive Gateway Theatre of Shopping, the Ridgeside precinct in Umhlanga and, more recently, the Sibaya and Cornubia development precincts.

Several property groups and business organisations contacted by Moneyweb have conceded that the woes at Tongaat Hulett will negatively impact development in the region considering that the group is a major driver of several property projects.

Already, one of the group’s biggest announcements – related to a new Club Med Resort near the town of Tinley Manor – has been put on hold. Moneyweb understands that an announcement was meant to have been made in March. KZN provincial government authorities confirmed during Africa’s Travel Indaba in May that Tongaat Hulett had signed a memorandum of understanding with Club Med, although the name of the developer/investor was not revealed.

“Problems at the Tongaat Hulett group and the restructuring have clearly had a significant impact on its development division, as the group looks to cut its debt and costs,” says Neil Gopal, CEO of the South African Property Owners Association (Sapoa).

“It’s the last thing the eThekwini Municipality needs as Tongaat Hulett is a big player in Durban and on the KZN North Coast. The Tongaat Hulett Developments division has been driving many of the developments north of Durban.” 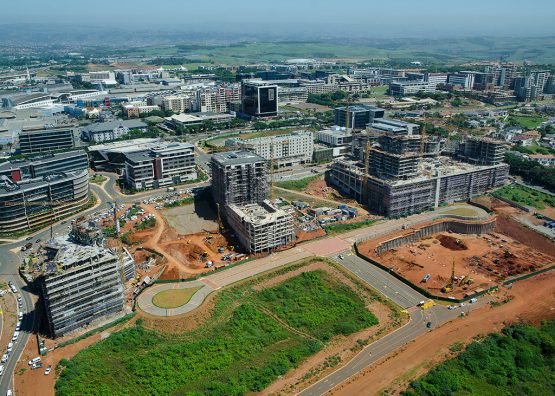 He says Tongaat Hulett’s woes and the general negative sentiments in SA’s commercial property sector have been exacerbated by poor economic growth, uncertainty around land expropriation without compensation, the so-called “construction mafia” halting property projects in the province, as well as inefficiencies and higher rates at municipal level.

“The multi-layered problems facing the country, including issues at Eskom and even load shedding earlier this year, have all contributed to the weak state of the commercial property market,” says Gopal.

Glen Robbins, a KZN-based urban and regional planning economist, says Tongaat Hulett has been struggling to sell land in the last year on the back of SA’s weak economy and policy uncertainty. “Tongaat Hulett’s model of master-planning and packaging land for development worked for a long time and saw it become a major driver of development north of Durban. Things have become more complex in recent years. The situation the group finds itself in will have a negative impact on KZN, for both the property and the sugar industry.”

He adds: “Without doubt property groups dealing with Tongaat Hulett will wait for the dust to settle before signing deals or embarking on new developments. I doubt there will be developer appetite for newer projects such as their Shongweni development between Durban and Pietermaritzburg. You may also see slowing demand for projects around Sibaya and Cornubia, north of Durban.”

‘Flash sales’ of land a possibility

Robbins also raised concerns that as part of its restructuring, Tongaat Hulett may undertake “flash sales” of large tracts of land to cover some of its debt. Most property companies speaking to Moneyweb on condition of anonymity raised similar concerns, including Tongaat Hulett’s capacity to deliver on its infrastructure commitments for its development precincts and the possibility of it exiting property development altogether.

However, Moses Tembe, who chairs local business body the KZN Growth Coalition, tells Moneyweb the coalition has received assurances from Tongaat Hulett that it will deliver on its infrastructure commitments for current projects.

“We are all concerned about developments within the group that have led to it suspending the trading of its shares on the JSE,” says Tembe. “It will have an impact on new developments, but we have been assured that budget commitments made to current projects like the Sibaya precinct will continue and  that land sales already made won’t be reversed. Important developments like the new private university at Sibaya and the resort at Tinley Manor will go ahead.”

Cobus Oelofse, CEO of the iLembe Chamber of Commerce, Industry and Tourism, says: “Tongaat Hulett is a significant economic contributor to the iLembe district which includes coastal towns like Ballito and Tinley Manor. Turmoil in the group will negatively impact the region’s economy.”

He adds: “While the company’s woes are a setback for the region, we believe there is sufficient momentum in the real estate sector on the North Coast. There are other significant players now, such as Collins Residential, IFA Hotels & Resorts, which is driving Zimbali Lakes, and Royal Shaka Property Group, among other private property developers.”

Tongaat Hulett’s share price has plummeted more than 75% since the beginning of the year and stood at R13.21 when it suspended trading on the JSE on June 10. This came in the wake of the group’s Sens announcement on May 31 that it would have to restate its equity by between R3.5 billion and R4.5 billion.

Its developments division has come under scrutiny as the company continues with its group-wide “strategic and financial review” which has seen it institute a forensic investigation into its operations and financials.

The company said it would respond to Moneyweb’s queries this week.

KZN North Coast (ex Durban) will we the best performing region in RSA property-wise over the next decade.

Agree. Western Cape property bubble has popped due to 3rd world problems catching up.And the sea is much warmer.

Geranium – you clearly have no idea what you are talking about. Durban central may be a dump and it has been for years, just like JHB and PTA CBDs, but going further North is fantastic. I live in Ballito (after having stayed in both PTA and JHB) and I can tell you that the lifestyle here is 100% better and safer – even more so than the winelsands. An excellent airport at our doorstep, burgeoning developments (which won’t stop with Tongaat Hullet’s failure) and none of the Gauteng traffic, smog or aggression. Don’t talk nonsense unless you can back it up.

i can back it up , used to live there.
wait until Hnwi individual pool dries up,
then you’ll be giving that overpriced piece of

Agree with many comments, as the DBN-north corridor is the node with the highest development growth at present (and for good reason, as some has stated).

Simply because the WesternCape has its property run mostly behind it (and besides, how high can property prices go in the current economy?) and more funds starts to flow to more attractive regions, price wise, to the north of DBN.

Some has commented (on other articles) that the better-run DA Western Cape is the “victim of it’s own success”, with people looking for work from other provinces flowing into WC…as someone said “3rd world problems catching up”.

NOW MY QUESTION:
Since we expect these northern KZN development node to do well in future, HOW LONG before it attracts a flow a “3rd world problems” desperately looking for employment in such a ‘nice and well run’ region??

Micheal, you touched on a major fundamental reality that drives property values across all regions of South Africa. This phenomenon is part of the “business plan” of the ANC government. It is part of the legal system and motivated by the Charter of Human Rights. This system is executed by the municipalities and enforced by the legal framework. The redistributive municipal rates and taxes enable the looting of private property owners to bribe unemployed people to migrate to that municipality in order to receive free housing and services.

This “business plan” is a fundamental part of the quest for votes for the ANC and the EFF and sadly now, also for the DA. The fact that this business plan is highly unsustainable, does not deter the implementation thereof.

The law of the land enables, enforces and ensures the eventual degradation of all upmarket developments in every municipality. It is via this mechanism that any efficient municipality will eventually become the victim of its own success.

The “user pays” principle along with the protection of property rights is the only solution.