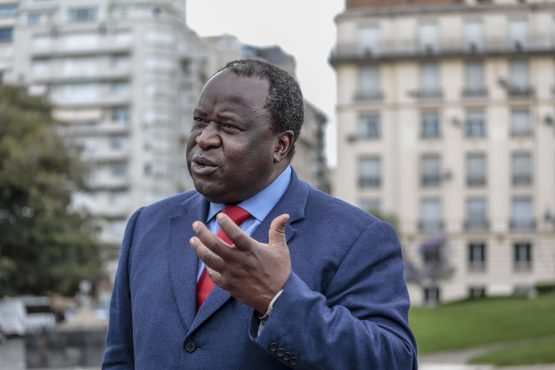 Finance minister Tito Mboweni backed the central bank’s existing mandate of targeting inflation only hours after the ruling party’s top decision-making body called on the government to expand the remit to include economic growth and job creation.

Enoch Godongwana, the head of economic transformation at the African National Congress, has also come to the Reserve Bank’s defence. This follows comments from Ace Magashule, the party’s secretary-general, on Tuesday that the ANC’s National Executive Committee agreed to broaden the Reserve Bank’s objectives beyond price stability and that it look at quantitative easing .

“Government sets the mandate” for the South Africa’s central bank, Mboweni wrote on Twitter late on Tuesday. “The primary mandate of the South African Reserve Bank is to protect the value of the currency in the interest of balanced economic growth and development.”

Government sets the mandate for the SARB. There is no quantitative easing thing here. The primary mandate of the SA Reserve Bank is to “protect the value of the currency in the interest of balanced economic growth and development”.

Magashule’s comments risk “undermining policy certainty,” Godongwana said in an interview on Johannesburg-based radio station SAfm on Wednesday. Godongwana was earlier cited by the Johannesburg-based TimesLIVE website as saying the NEC has not taken a decision to expand the Sarb’s mandate. Both Mboweni and Godongwana are members of the NEC.

Read: Will the ANC NEC rally behind Ramaphosa?

The confusion highlights the divisions within the ANC and further complicates President Cyril Ramaphosa’s plan to turn around South Africa’s struggling economy, which contracted by 3.2% in the first quarter, its worst performance in a decade. While the independence of the Reserve Bank is enshrined in South Africa’s constitution, the central bank is increasingly being targeted by factions within the ANC, who want it to take a more active role in providing economic impetus.

Mboweni dismissed Magashule’s comments, saying “there is no quantitative easing thing here.” Quantitative easing usually refers to a relaxation of monetary policy achieved through the purchase of longer-term securities by the central bank.

As it stands, the monetary policy committee of the South African central bank targets keeping consumer inflation at between 3% and 6%. Calls to ANC spokesman Pule Mabe weren’t answered.

Obvious good old Ace is on a different mission. Nobody but himself drafted his statement. “Quantity Easing” I ask you. Hahaaa.

He has no clue whatsoever what this is even about.

How confusing, I can’t blame ACE for being “baambuzelled” too. whatever that means. I Thought The SARB was Privately owned, then why so much Government interference, where are the owners now?

I gave the 3rd thumbs-up tick to your comment in error – pls ignore it. I wanted to say – Google it – keywords are: SARB History Shareholding, etc

Can even ask SARB itself – contact media department – ask for educational material on history and shareholding. No one “owns” SARB – it’s a South African institution.

What exactly is the point you’re trying to make? Your link shows a transaction whereby a syndicate of international banks made a LOAN to SARB while Mboweni was governor. The loan is not for any individual at SARB, but relates to foreign reserves or liquidity issues and the loan is repayable by SARB on behalf of SA as stipulated in the terms set out in the link.
It has NOTHING to do with SARB’s so-called ownership, as you seem to think. And the Lead Managers you refer to at the bottom, are owners or shareholders of the AMERICAN banks, not SARB!

So, I repeat: SARB is a South African Public Institution, not “owned” by ANYONE! It’s independence is guaranteed by the SA Constitution and cannot change without a two/thirds majority vote in parliament.
Hope that helps.

JZ might be using Ace as a proxy to see what the reaction is, or possible get public support for his faction’s policies in the NEC.

SARB is privately owned but controlled by the ANC who have majority voting rights, from what I understand. Perhaps it’s a good thing that there is division amongst this platform of votes….it’s called Democracy when I last looked!

Spokesman Mabe is out shorting the rand – don’t disturb him!

DOES SARB CARE ABOUT UNEMPLOYMENTAND INEQUALITY OF IT’S CITIZENS OR PRIVATE SHAREHOLDERS LET GOVERNMENT START IT OWN BANK TO PROTECT IT’S PEOPLE.

Agree, leave the reserve bank to fulfill its legal mandate in terms of the constitution. And Government has been trying for years to run an own bank – it”s called the SA Post office.

In fact, the SARB is keeping inflation in check. If there was no control, you’d be paying R2,000 for a loaf of bread by now. Maybe the people want that? And R5,000 for 1 litre of petrol…?

Jobs are the result of investor confidence in an economy, expansion of factories/businesses. But the Govt must not see business as “enemy number one”. Govt (along with the people) is getting punished with a smaller economy. The jobless will grow even much more. Investors/businesses are leaving. Who will fix your BMW one day?

Yes, you’re right – SARB’s 1st task is to keep inflation in check between 3 and 6%.
Thereafter and since Gill Marcus days, it also adjusts interest rates when there’s no real threat of CPIX rising, in an effort to blow some life and liquidity into the economy to bring (limited) relief to consumers under pressure. But these instruments are blunt – as you say, the hospital can’t run the dam levels.
Poor governor Lesetja Kganyago is today even quoted in the media assuring people (possibly the international press, after the Qauntity Easing-bit) that SARB won’t be bailing out the SOEs. He must be running around like a chicken with no head fighting all the fall-out. Mboweni’s phone has apparently not stopped ringing the whole day – all international press!

Who will bail out Govt’s commercial bank? Govt cannot even generate a profitable power utility (…that is Eskom btw), while it is a monopoly!

They cannot even run an airline profitably.

It’s been trying to turn the post office into a state-owned bank for years, without success.

(Hello Louise. Note that my comment was aimed at “dodovuhandy” 😉

Nevertheless, am in agreement what you say.

Ace………quantity easing, wahahahahaha, what an embarrassment, I would hide my head in my hands.

*lol* yes. Ace better call for measures to “please protect me from yourself”

“ANC spokesperson Pule Mabe says, “Those are discussions that are ongoing in the organisation as part of exploring the different options. It is in our interest that the central bank is stable, it continues to discharge its own mandate and makes a positive contribution on the kind of growth that we want to see in the country. At the right time when we have clearly formulated a view on how all of these things are going to be approached, we’ll be able to communicate and convey our message, we are quite confident now and happy with the work that the central bank is doing to try and make sure that we achieve the levels of stability required but we also boost investor confidence as well.”