Administrators say R10.5 billion is needed for the airline to resume operations.
By Antony Sguazzin and Loni Prinsloo, Bloomberg 28 Sep 2020  11:27 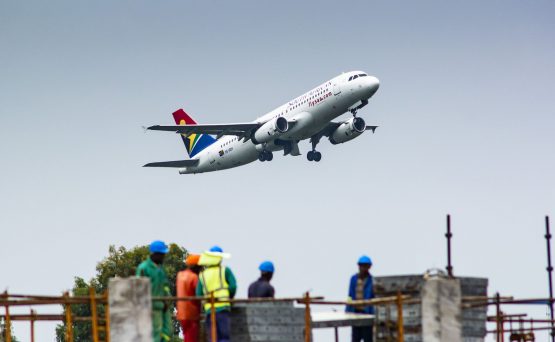 South Africa’s National Treasury wants strict conditions attached to any guarantees it provides for loans to the country’s embattled state airline, according to two people familiar with the matter.

Treasury and Department of Public Enterprises officials met Saturday to discuss ways to restart South African Airways, the people said, asking not to be identified because the talks are private. Representatives of two South African banks attended the talks, they said.

SAA halted operations and sought bankruptcy protection in December. The carrier’s administrators say R10.5 billion ($613 million) is needed for the airline to resume operations. Finance Minister Tito Mboweni is prepared to provide guarantees on 4 to 5 billion rand of that amount, subject to stringent criteria, the people said.

It’s unclear where the funding would be sourced from and there’s no agreement yet on any bailout, the people said. President Cyril Ramaphosa has backed the airline’s rescue, they said.

Treasury guarantees may encourage private lenders to provide financing to SAA, the people said. Any government funding may also help ensure a future equity-partner deal, which is currently envisaged by the end of the year, the people said.

Twenty private-sector funders, private-equity investors and partners have submitted unsolicited expressions of interest in a restructured SAA, and those are being assessed, the Department of Public Enterprises said.

Ethiopian Airlines Group is in talks with SAA about providing assistance, people familiar with the situation have said. The Addis Ababa-based carrier is seeking control, possibly in the form of a management contract, and that may be a sticking point, the people said.

Ethiopia, that country wracked by periodic famine, poverty, upheaval and death, buying out the airline of a country of spoiled ingrates and deadweights on SOE payrolls. Precious.

What “South Africa’s National Treasury wants” and what the ANC elite clique tell them to do are two entirely different things.

The only source of funds is the SA taxpayer – in one form or another and that we are being hijacked to ensure ongoing employment of a few thousand SAA employees who should, if they are really as professional as they claim, find work elsewhere in the job market.

You have touched on the real problem. A very small portion of the SAA staff are professionals. The majority are deployments who have no idea what the word professional means. That is why the ANC is so desperate to save the failures, they know they will not find the same well paying jobs again.

There’s a MW article (by Craig Torr) today “What happens to your debt when you die”.

And the answer was, if you not have Life Insurance covering outstanding debt, your estate will inherit it & be left compromised.

But somehow not so with the ‘old’ SAA? Pop, out comes a ‘new’ national airline (with same national lootership, sorry meant leadership) yet creditors will have to bury & forget about billions of SAA debt..?

With the BRPs having seriously underestimated costs to run airlines viably, according to Joachim Von Bruggen on radio this morning, it’s not only R10,5 needed ASAP; consider how the BRPs made no provision to pay SAATechnical to inspect Mango and SAAs flights in the past months of repatriation and post-covid! The BRPs expect SAAT to run a tab indefinitely for the two state airlines – did the BRPs consult first with SAAT before fixing the amount of R10,5?
SA tax payers should brace themselves for a very bumpy flight ahead….