An extraordinarily thoughtful and creative researcher.
By Murray Leibbrandt 4 Jun 2022 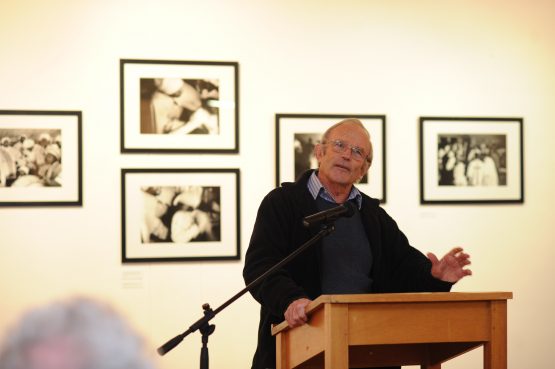 Francis Wilson: an academic who never fitted easily into any school of thought or belonged in anyone’s camp. Image: UCT News

In 2016, South African economist Francis Wilson was awarded an honorary doctorate by the University of Cape Town. Nominators of a person for this highest honorary degree get to select from one of two criteria:

Those nominating Francis, who passed away in April 2022, ticked both boxes. And as the nomination wended its way through the notoriously fractious processes of senate and council there was no contesting this.

Francis made a unique contribution to documenting and analysing key historical and contemporary social issues affecting South African society. Even more rare was how he used his research and that of others to promote social change for good in South Africa.

The heart of his contribution lies, quite uniquely, in the space between the two honorary doctorate criteria. He had a lifetime of exceptional contributions to scholarship and of taking these into the public domain to fight for a just society.

Francis returned to South Africa – and the University of Cape Town – after completing a PhD in Cambridge. In 1971 and 1972 he published three pieces of research that individually and collectively have been immensely influential.

Taken together these works tell a connected story of the economics of the gold mines and their need for cheap labour, the decimation of rural life in South Africa to effect this supply of migrant labour, and the terrible social consequences of this system for these migrants and their households.

Francis’ academic leadership and his broader contributions were founded on his work as a researcher. He was an extraordinarily thoughtful and creative researcher. Along with this talent, he always invested the considerable time and intellectual perspiration required to craft his research. He valued the honing that came with writing and rewriting and so demanded this discipline of himself. He knew that his research was a foundation stone for his broader contributions, giving him confidence about what needed to be said and what needed to be done.

This was an unflinching lifelong commitment to the hard work of careful scholarship.

Francis’ research produced rock-solid evidence detailing fundamental prevailing realities. Many have referred to his famous series on real wages by race in Labour in the South African Gold Mines as an example of the loud power of his work. He found, after painstaking examination of Chamber of Mines reports over 55 years, that black miners’ wages had actually declined in real terms.

In 1975 Francis launched the Southern Africa Labour and Development Research Unit at the University of Cape Town. The founding grant was from the mining giant Anglo American. Given his work up to this point, this is more than ironic. It has to serve as an early example of Francis’ absolutely unique spirit and gift of communication and engagement.

Francis led the unit into new research areas such as farm labour and health. He also became a convener of research processes.

By the end of the 1970s, an extraordinary array of young anti-apartheid activists had flowed into the unit’s safe space, even seeking shelter from the physical and psychological brutality of the security police. Francis and Dudley Horner, his co-leader in fashioning the unit, were very comfortable with this. But they were equally clear that this remained a research unit, albeit a rather special one.

Francis and the unit had established legitimacy with political groups operating outside of the apartheid parliamentary structures as well as with foreign donors, who saw in both strong beacons of credible research on key South African issues.

When in 1982, the Carnegie Corporation decided to fund the 2nd Carnegie Inquiry into Poverty and Development in South Africa, Francis was asked to direct this Inquiry with the unit serving as the base institution.

In the initial years of the Carnegie Inquiry leading up the conference of September 1984, Francis went the length and breadth of South Africa speaking to people about its purpose. He visited academics, as well as community groups, NGOs, private sector groupings and committed individuals who were trying to make a difference in their own way.

There were close to 400 presentations at the 1984 conference and a photographic exhibition. Soon after the conference, 380 working papers were printed and distributed widely across the country and internationally. In 1986 Omar Badsha’s photographs were published as a book with a text written by Francis Wilson.

This collective effort presented a formidable and graphic documentation of the structural impoverishment of black South Africans under apartheid – a massive contribution worth honouring in and of itself.

The consolidation of the 380 working papers was undertaken by Francis and Dr Mamphela Ramphele. The 1989 book, Uprooting Poverty: The South African Challenge, is a landmark study of poverty in South Africa. It offers a textured account of the harsh life for ordinary South Africans in the 1980s and is probably South Africa’s most well-known book on poverty. In many senses, the post-apartheid research thrust starts with this work.

By 1992 the ANC policy desk was preparing to take office and had begun formulating policy to govern. A particular concern was the need for a national household living standards survey that produced baseline evidence of the state of the nation at that time.

Once more it was Francis and the unit who were approached to partner the World Bank in producing these data. The apartheid state had refused to include the entire country in its censuses. This damage to the national statistical system made drawing a credible, nationally representative sample very difficult. It required first-rate application of the art and science of survey sampling.

South Africa’s national living standards measurement survey, the Project to Support Living Standards and Development, undertook its fieldwork in the second half of 1993. It used a set of regionally credible survey groups to implement and oversee the quality of this national effort. The results of the survey were released to the public at a conference less than a year later in September 1994. This turn-around time from the field to public release remains one of the fastest on record for the hundreds of World Bank Living Standards Measurement Study surveys that have been conducted across the globe.

These 1993 data were used intensively in the 1990s for research and policy purposes, including several influential papers on South Africa’s social grants that motivated the consequent expansion of this grant system into one of the largest in the world. They continue to be used to detail the state of the nation at the advent of the post-apartheid period.

Over the next 20 years Francis worked as a zealous advocate in the cause of the public release of survey data. He was the founding director of DataFirst in 2001, a research data service dedicated to giving open access to data from South Africa and other African countries. Today its data are available online, along with available accompanying documentation. This promotes access and appropriate use.

In the early 2000s Francis handed over the directorship and leadership of the Southern Africa Labour and Development Research Unit to me and a group of economists in the School of Economics in order for him to found and grow DataFirst. But he did not ever retire from the unit.

Many of us had the privilege of working alongside Francis for a very long time as colleagues and friends. We all benefited many times from the magic of engaging with him. He inspired us.

Francis was genial, engaging, inspiring and energising for all. This makes it very easy to assume that his contributions and achievements flowed naturally, even effortlessly. This was not the case. This tribute has drawn attention to the fact that he was very serious about his scholarship and committing the time, care, and perspiration required to undertake this research. As he told some of us, he followed the dictum of John Maynard Keynes on his chosen field, economics: it is a method rather than a doctrine – a way of understanding and explaining the world.

Francis accumulated evidence and then sought to be true to it, to struggle with its awkwardness and its refusal to accommodate simple, hydraulic explanations. While his research has been invaluable to all, Francis never fitted easily into any school of thought or belonged snuggly in anyone’s camp.

In the fraught world of apartheid South Africa, today in contemporary South Africa, and in between, this has been an uncomfortable and somewhat lonely walk. Despite the importance of his work on the decimation of black agriculture in South Africa’s rural peripheries and the creation of a black labour supply for the mines to the emerging radical historiography of the 1970 and 1980s, he did not fit or sit comfortably in this school.

Over the past decade, people in power, nearly all of whom knew Francis and some of whom said that they had been inspired by him, were enacting policies that did not pass the test of being in the best interests of all in this country when benchmarked by available data or by Francis’ boots on the ground.

Francis’ unshakeable credibility and the respect that he showed to all were essential in navigating some of this awkwardness. Yet his chosen path was not an easy walk.

One of his most precious gifts to us in the unit was that he shared this aspect of himself, perhaps as a way of steeling us for the stresses accompanying this way in the world. He was open about the fact that there were times when this had been too much for him; when he just would not have coped or been able to continue on his mission without his own muse and mainstay, his precious wife, Lindy.

Together they found a way around the obstacles. In his life he ticked many boxes, way beyond the two criteria stipulated for an Honorary Doctorate. All of us in the unit and many others have benefited from his personal and intellectual legacy and are deeply grateful for his life.