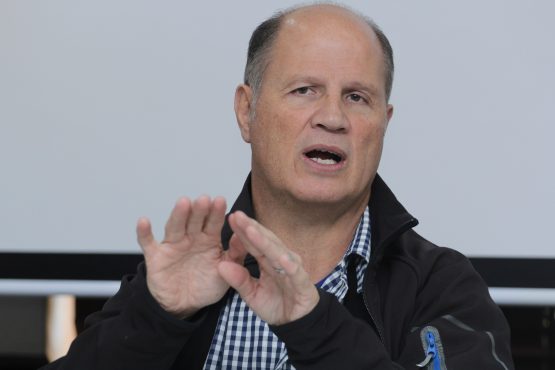 Private investigator Danie Day says there is evidence of a third force behind the truck attacks. Picture: Moneyweb

The spike in freight truck attacks nationwide has stirred fear across the industry, which faces the risk of losing drivers as well as export partners due to safety concerns, particularly on the N3 highway between Durban and Johannesburg.

Stakeholders who have been assessing the attacks have branded the violence as acts of “economic sabotage”, warning that there will be dire consequences for economic growth and investment should there not be any intervention from the authorities.

Speaking at a National Press Club event highlighting the issue of criminality in the truck industry, Danie Day, a private investigator who monitors cases of truck hijackings and attacks for insurance companies, said his office has been investigating between 30 and 40 cases of truck attacks a month.

“The okes are concerned and the drivers have made it very clear that they will abandon the trucks because they cannot continue to work under these circumstances,” said Day.

“Sadly, the police are not making a difference with regard to protecting the people en route.”

Day says that while there are opportunistic attacks on trucks caught in service delivery protests and acts of xenophobia due to disgruntlement around companies employing foreign national drivers, there is evidence of a “third force” behind the violence.

He could not specify who the force is but many in the industry have placed blame on the All Truck Drivers Foundation (ATDF) for the violence as it has been reported as saying that the fight against foreign truck drivers will continue until companies stop employing them.

He adds that while the attacks seem to have originated in KwaZulu-Natal, they have become more widespread with his office receiving cases in the Northern Cape and the Western Cape, which had not previously experienced these issues.

What is happening now, says Day, is that if a truck that has broken down stops next to the road, or stops outside a truck stop for any reason, it is likely to be attacked. In the worst-case scenario, the perpetrators throw petrol bombs into the trucks while they are moving.

The road freight industry contributes about R121 billion to the economy, and the industry’s association has previously said that the violent attacks have cost the economy between R1.2 billion and R1.3 billion.

Just last week an inter-ministerial committee comprising the ministers of transport, police, labour and home affairs met over three days in Durban to address the issues faced by the industry. This came after a weekend of unrest where at least 17 trucks were torched in KwaZulu-Natal.

Soon after their announcement of interventions, such as increased policing, more attacks followed – prompting a stern rebuke from Minister of Transport Fikile Mbalula who exclaimed that government will not “allow for any parts of the country to be declared a no-go zone”.

Durban is the biggest import and export port in sub-Saharan Africa for the motor industry, but economist Mike Schüssler says, the continuous violence could drive the country’s trading partners, particularly its neighbouring countries, to use other ports.

Schüssler says there could be a move towards the Port of Walvis Bay in Namibia by the likes of Botswana, while Zimbabwe and Zambia could choose to move more of their exports through the Port of Beira in Mozambique.

“We are going to damage our relations with the rest of Africa,” says Schüssler.

“We are going to damage the one part of our economy that has been growing its exports vigorously despite the downturn in African growth rates into Africa.”

He points out that the country’s ability to send value-added goods into the continent is an advantage that should not be damaged.

Plain straight forward terrorism – tolerated by inaction on the part of the police and government in general.
The army’s troops are paid to sit around and watch DSTV in their bungalows while all this is happening!!!!

ANC is an organisation with strong terrorism roots hence the inaction/sympathy towards this.

Absolutely no political will to end all violence and worse by the day. ANC must have an agenda behind all this. Should be time to declare a state of emergency and bring in the army…if there is one.

The ONLY thing these attackers understand is violence. They need to be met with the precise response they mete out – and to hell with ‘human rights’. The term simply does not apply in Africa.

In typical SA fashion the government will negotiate with these lowlife criminals. Just like the construction mafia. They know exactly who they are and do nothing about it. Has one been locked up yet? I am not talking about arrested and then released. I am talking about locked up and the key thrown away.

1. Declare martial law along the major routes in SA.
2. Publicize the fact that looters and attackers will be shot on sight.
3. Let the army do something useful for a change.
If anybody is still dumb enough to target a truck, send his family the bill for the sharp point ammo and the pauper’s funeral.

Goes to show when this behavior is tolerated, and I am sure behind closed doors promoted, we really are a barbaric 4th world country.

That’s why Malema and co hate the west, hate colonialization.

And to think we did the first heart transplant, we make fuel from coal…..makes you weep.

Does Eskom Prassa etc. not come to mind.

Maybe SA should fix the basics first before worrying the 4 IR will leave them behind. Catch up with the first than go to the second. YOU ARE BEHIND!

Try and get enough dry coal for Eskom to start with.

When your own government consists of a band of criminals it stands to reason that the populace follow suit.

The saddest thing of all is that CR can do absolutely nothing about it or farm murders.
He is overwhelmed by the Zuma faction, Ace, Mabuza, Supra and the rest.

Indeed. Also, to a large extent the SAPD and SANDF is not deployed.
The weak ANC leadership fears another “Marikana-event” in case the public order police need to shoot/kill looters.
Then the EFF will say “The ANC is shooting on its own people. Vote for us”

To be radical, you only need ONE Marikana-type event resulting in a pile of looters’ bodies…then this nonsense will stop.

Thank Ramos for Transnet’s demise and hence everything has to go by road. Now it is up to the mafia to take what they want.

Instead stating “SA is finished”, I would rather say…you’ll still be receiving your goods/deliveries on time…but it will come at a steep price (thanks to armed escort/convoy system)

Part of the inflated price one will pay, siphons down to the benefit of the looters who grab what they can.

In the future, the move will be towards more BASIC consumer items that will be available throughout SA, as it will become too expensive to live a modern, western lifestyle.

(Perhaps you may be correct…finished in a ‘modern, industrialised’ sense?)

I fear it won’t be long before The Paramount Group (manuf of armoured vehicles) may come up with an unique South African solution, we’re so well-known for ingenuity.

It will closely follow the design trend of the classic WW2 bomber: on top of the driver’s cab, will be your forward-filing gun turret (2x .50 cal); at the rear of cargo area, will be the “tail gunner” position. The “ventral turret” on top of reinforced cargo hold, will cover 360deg. Then don’t forget side-firing “dorsal” gun mounts from middle of cargo area.

And then you realise (because of the extra weight of guns, ammo) your truck cargo-hauling capacity has gone down by less than half! 🙁

(Stuff the cargo! Heck….we can even try to fit a “ball turret” under the freight body, at axle level. This will clear any ankles, feet, lower limbs from offending looters…or traffic cops alike 😉

Well now you have a “sweeper” vehicle…that can join a freight convoy.

YES this is the solution.

Or perhaps one night during a service protest some vigilante type will just pull his 45 and take out 6 of them then disappear.

The “hard” solution would be convoys of trucks leaving once per hour from Durban to Joburg and back each escorted by several armoured vehicles with permission to shoot + defended encampments along the major routes with armoured vehicles and armed helicopters that will dash out to support a convoy at risk of being overwhelmed. This will stop this nonsense immediately.

This country is a joke – and it’s on us!