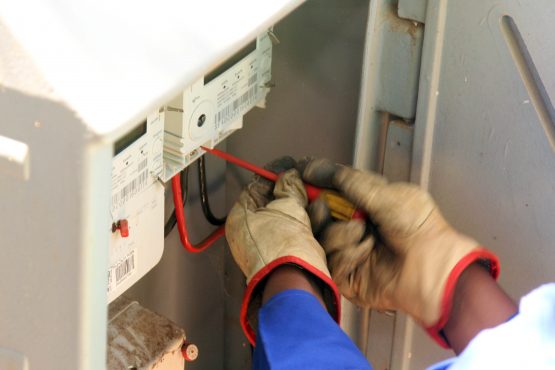 Prepaid electricity meters installed in terms of an unlawful and invalid contract costing the City of Tshwane millions each day are being replaced with new meters. Image: Moneyweb

The City of Tshwane on Friday kicked off the court-ordered process to remove the prepaid electricity meters installed in terms of its unlawful and invalid contract with controversial PEU Capital Partners.

This means the multi-million rand daily payments the city has been making to PEU in terms of a contract described as unaffordable – even by previous ANC mayor Kgosientso Ramokgopa – will come to a halt.

The removal of the first four meters from residences in the Boardwalk Meander in the East of Pretoria on Friday is the beginning of a four-month transition period in terms of a settlement between the city and PEU that was made an order of the court late last year. During this period about 650 residential and 650 large user meters must be replaced and integrated with a new data management system procured by the city.

The settlement came about a year after the contract was declared unlawful and invalid and set aside in the High Court in Pretoria due to tender irregularities. The court then suspended its order until a just and equitable remedy that would ensure uninterrupted power supply to customers could be found.

The court action was led by Sakeliga (the business arm of the Solidarity movement), and the city eventually supported the action after the DA came to power and withdrew the initial opposition lodged under the ANC regime.

Sakeliga in January expressed its concern about the delay in triggering the transition period. Armand Greyling, business and policy analyst at Sakeliga, then told Moneyweb: “We find it deeply concerning that after five years of extended litigation in the City of Tshwane/PEU/TUMS [TUMS is the PEU special purpose vehicle executing the contract] matter, that electricity consumers within the confines of the city’s jurisdiction still have to wait for the current smart-meter infrastructure to be removed in accordance with the court order obtained on October 23, 2018.”

Sakeliga threatened to get a contempt of court order if the delay continued.

The city then awarded the outstanding contract for the supply of the new meters to three different suppliers and gave notice of the start of the transitional period. Industry sources were surprised that the award was split, since it was expressly stated at tender stage that it would be awarded to only one supplier.

In an internal report to the mayoral committee in January, which Moneyweb has seen, the administration sets its target at replacing 100 residential and 100 large power user meters per day. Member of the mayoral committee (MMC) for utility services Abel Tau acknowledged on Friday that this is a very ambitious target but expressed his confidence that the job would be done within the allowed four months.

That will still require more than 160 replacements per day, not counting weekends.

Johan Hopley, manager at Impact Meter Services, expressed his concerns about the project to Moneyweb. He says Impact manages about 900 of these meters and has not been contacted by the City for arrangements to have any of them replaced.

He asked whether the credit balances on the PEU meters would be transferred to the new meters, adding that is especially relevant to large power users who must pay the maximum demand charge monthly in advance.

Another consequence of the unlawful contract is that disputes involving several customers who were allegedly undercharged are still unresolved.

Moneyweb reported in May last year that Productive Systems, a small engineering company in Centurion with a monthly electricity cost of about R17 000, was notified that it had five days to pay R1.2 million because its electricity usage had been under-recovered since 2015.

The city has on occasion stated that many more meters were similarly over- or under-charging. In fact, one official told Moneyweb about 600 meters were affected. Few details were provided though, and the city and PEU blamed each other for the mistakes.

Hopley says one of his clients had a R900 000 credit on his meter after earlier over-recovery. He wanted assurance that this credit would be transferred to the new system.

The Productive Systems dispute is currently before energy regulator Nersa for mediation.

Tau told Moneyweb on Friday that the project is of the highest priority for the city and that the multidisciplinary task team overseeing it will report to himself and fellow MMCs Mare-Lise Fourie (finance) and Cilliers Brink (legal and corporate affairs) every second week.

He said customers will not lose their credit balances as all information will be transferred from the PEU system to the new system.

With the new system, the city will retain control over its electricity revenue, and as the transition period draws to a halt the reduced payments to service providers should assist in improving the city’s liquidity.

When the smart meter was installed for my premises I lost R3600 credit plus the deposit. All efforts over the years came to nothing and last year the credit was cancelled by Tshwane. You cannot run a smartmeter without credit. The initial installation took place without prior notice. This is probably what will happen again.

The cost of ANC corruption is incalculable.

Yes, but it seems the DA also dragged its feet?

Apart from the backhanders we now have 13,000 meters plus installation cost flushed down the toilet. If they had involved ethical specialists in the tender award they would have insisted on meters that can be managed by alternative platforms. To upload a meter reading is not rocket science.

I bet any of the ANC councilors would battle to construct a simple lego toy. Either that or they all play & cheat at “monopoly” during work hours

The damage done by the ANC over the past decade must be in the trillions if you drill down into every comrades work.

The irony is the DA will get turn the city into a well function city with good finances in maybe 5 years. The problem is they will probably he voted out in that time period, you get the leadership you deserve.

Someone with a brain woke up.