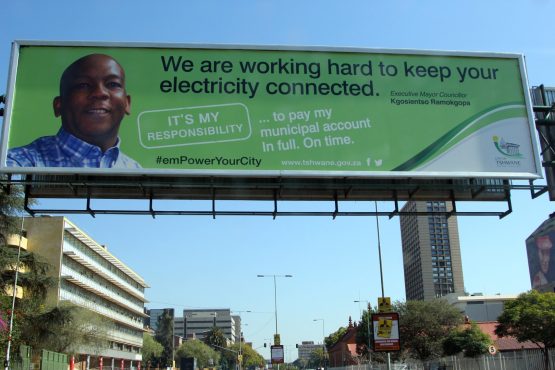 Moneyweb has learnt that three High Court judges on Tuesday requested that business grouping AfriSake, the City of Tshwane and its controversial smart metering contractor PEU Capital Partners try to reach a settlement.

This came on the eve of the hearing of a review application launched by AfriSake, which is aimed at having certain agreements between Tshwane and PEU declared unlawful and invalid and set aside.

This includes the contract Tshwane awarded to PEU in June 2013 to install a smart electricity metering system consisting of 800 000 meters and operate it for at least eight years.

In terms of the contract, Tshwane would pay PEU 19.5% of the electricity revenue vended through the system. Even before the contract was concluded then finance minister Pravin Gordhan warned Kgosientso Ramokgopa, who was the ANC mayor of Tshwane at the time, that the contract would not provide value for Tshwane rate payers. Ramogkopa did not at the time disclose Gordhan’s warnings to the Tshwane council and allegedly flouted procurement processes.

Ramokgopa in May 2015 conceded that the deal was unaffordable for the city and proceeded to conclude an interim service and transfer agreement and a termination agreement with PEU.

These subsequent agreements provided a reduction of the 19.5% commission to 9.5% with the difference being paid into a trust account to be used to pay for the city to buy PEU’s infrastructure at an amount not exceeding R950 million.

In June last year, AfriSake obtained an interim court order to prevent the payment of the R950 million to PEU. The court ordered that the status quo remain until the full review was finalised. This is the review hearing due to start on Wednesday.

The 13 000 meters that PEU installed include those servicing 6 500 of Tshwane’s large users and represent 55% of its electricity revenue. This puts PEU in a very strong position as it controls a large portion of the city’s revenue and power supply to its economic heart.

The DA took control of the city after the local government elections in August last year and has withdrawn the city’s earlier opposition to AfriSake’s application.

Moneyweb has learnt that the three judges set to hear the matter on Wednesday met with the legal teams on Tuesday and requested them to try to settle.

In response PEU sent a written settlement proposal to AfriSake and the City of Tshwane. They are expected to respond to the proposal today. The court hearing starts at 12:00pm.

In its proposal, which Moneyweb has seen, PEU states that the judges “wish the parties to consider whether there is a way to implement the ISTA but without the city being at risk of being out of pocket, in reliance on the obligation of Accenture to pay the R950 million purchase price for the TUMS’ system.”

TUMS is PEU’s implementation vehicle. The reference to Accenture is made in the context of Tshwane having earlier awarded a contract to Accenture to take over the smart metering function after the termination of its agreement with PEU. During the tender process, bidders were required to provide for an amount of R950 million to take over the PEU infrastructure.

Moneyweb has learnt that the bidders were never provided with a valuation of the infrastructure. An industry expert whose company decided on legal advice to withdraw from the bidding process told Moneyweb that the system is not worth R950 million. He says the kind of meters installed by PEU can be bought and installed at a cost of R3 500 each.

During an earlier court hearing, it came to light that the valuation was made on a discounted cash flow basis, which AfriSake argued was wrong. Accenture would in fact be buying the business of PEU, not its assets.

PEU in its proposal points out that the agreement between the city and Accenture only becomes binding when the legislative measures providing for long-term contracts have been complied with.

It proposes that the litigation be paused until such time and that Accenture then pays the R950 million either to Tshwane or directly to PEU.

In its second proposal PEU rejects AfriSake’s suggestion that the PEU system be revalued using a different method that will result in a reduced value. PEU however proposes a reduction of the value to R550 million to be paid by the city within 30 days of the court order. It simply cannot accept a “no profit” method, PEU states.

A source within the city pointed out to Moneyweb that a settlement would not deal with the unlawfulness of the contracts. The DA has been very vocal in its opposition to the contract even before it was signed and has blamed the financial woes of the city on the daily payments of more than R4 million to PEU.

The city also maintains that the meters PEU installed are non-compliant.

If the litigation is paused, PEU will continue to provide the service and the City of Tshwane will have to continue paying PEU more than R4 million per day.

Update: The case is no longer being heard on Wednesday but is expected to proceed on Thursday.

Democratic Alliance must fix this mess