Just a day after Employment and Labour Minister Thembelani Nxesi announced the extension of the Unemployment Insurance Fund (UIF) Temporary Employer-Employee Relief Scheme (Ters) to September 15, it has once again been suspended with immediate effect.

This follows Auditor-General (AG) Kimi Makwetu’s damning report last week which identified poor financial management and verification controls, leading to millions of rands in payments to the deceased, and people in prison.

Hours after the shocking outcomes of the report by the AG, Nxesi announced the suspension of  four officials including, UIF commissioner Teboho Maruping, COO, CFO and the head of supply chain management.

In a statement on its website, the Department of Labour noted that the suspension had been necessitated to mitigate risks identified by the AG in the Ters application system, and it would announce in due time when payments will resume. 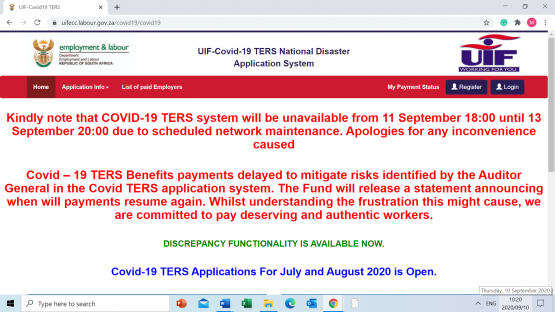 This is the same reason the department cited for suspending payments for 24 hours, just over two weeks ago (August 25).

Despite the halt in payments, Business for South Africa (B4SA) said in a statement that it is pleased with Nexis’s announcement for the further extension of the scheme.

“It appears that this extension will last until the State of Disaster ends, but final confirmation on funding availability for this is awaited.”

The scheme will assist the following applicants;

It will continue accepting applications for March to end July until September 15, after which no further applications shall be accepted.

The UIF has paid out more than R41 billion to more than 9.5 million workers so far.

If i remember correctly you receive your UIF contributions on time every time with military precision.All of my payslips have a regular record of how much you take from me without fail.

The UIF is meant to replace losses of income so that debit orders don’t bounce and that the highly indebted Saffer can continue living. You team is expected to give these benefits on schedule as you receive them on schedule.

This backlog of payments for several months will be unforgivable if reversed.I really do not care whether its IT, and audit or a lizard that was found dead in your office. Saffers need their UIF payments on time. It is your duty and responsibility to make sure that your department is ready to give a quality service to its contributors who have been forced to call on their contributions by circumstances beyond their control.

Guys you always get your salaries on time, now you keep on suspending uif ters, our debit orders bounces every month and that’s affects our credit records too because these people they don’t want to understand that our money is is suspended. Please do your job
We know we are poor but please stop taking n advantage of us, we are hungry, we can’t pay our bills too

Oh boy, even a kindergarten run by toddlers could have done a better job.

Seems goat herding skills are not transferable. Who knew?

An absolute joke. Like everything else these elected criminals touch.

Time to seriously consider to simply stop paying into the UIF.