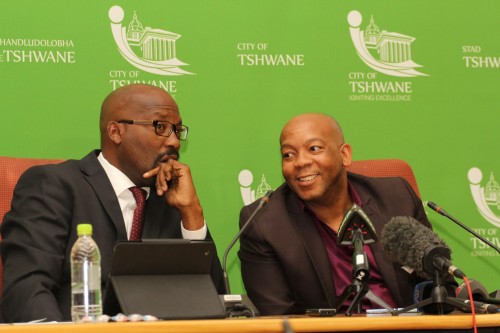 The City of Tshwane is apparently trying to shift the cost burden of cancelling its smart electricity metering contract with controversial service provider PEU Capital onto a new contractor.

In the meantime the City’s quarterly financial report shows that a further R210 million was paid to PEU in the first quarter of the new financial year, that is from July to September.

The Democratic Alliance (DA) on Monday laid criminal charges of fraud, perjury, contravention of the Municipal Finance Management Act (MFMA) and misleading Council with regard to the PEU contract against Mayor Kgosientso Ramokgopa, City Manager Jason Ngobeni and the directors of PEU and its special purpose vehicle for the contract, Total Utility Management Services (TUMS).

Prominent business man Peter Malungani is one of the directors.

The DA says the PEU contract has cost the City R1.84 billion in total since October 2013 and officials responsible for the wastage have to be held responsible. Ramakgopa and Ngobeni ignored instructions from then finance minister Pravin Gordhan not to go ahead with the deal and failed to inform council fully as they were legally obliged to do, DA mayoral candidate Solly Msimanga said outside the Sunnyside police station in Pretoria, where charges were laid.

Tender documents were made available last week for a service provider to take over the provision and management of smart metering in Tshwane, including the requirement for the successful bidder to take over the PEU infrastructure at an amount that still has to be determined by an independent valuer. While it is not clear when that will happen, the bids have to be submitted by the end of the month.
The projects includes the installation of 900 000 smart meters in two years and the management of the system for several years thereafter.

Moneyweb reported in June that the contract between PEU and the City was cancelled by agreement between the parties, citing the delay in the roll-out of 800 000 smart electricity meters caused by a legal challenge by business grouping AfriSake. AfriSake is part of the Solidarity movement.

AfriSake maintained that the contract is unlawful due the lack of a competitive bidding process before PEU was appointed. It alleged that PEU was appointed as a consultant to come up with solutions to enhance the city’s revenue. The smart metering project was one of its proposals and it was summarily appointed to execute the contract.

AfriSake failed to get an urgent court order to halt the project in its early stages, but is proceeding with its application to have the contract declared illegal and null and void.

At the time of cancellation PEU said the City would take over its infrastructure after a transitional period of six months, ending on December 31. During this period the City would continue to pay 19.5c of every rand collected for electricity sales vended through the PEU system. 9.5c of that would go into an escrow account for the benefit of the City, pending the fulfillment of the terms of the cancellation agreement. This 19.5% commission has amounted to R210 million in the three months ended September 30.

The City has not budgeted for either the 19.5c/R or the cost of buying the PEU infrastructure.

As remedial measures for the unbudgeted spending on the prepaid commission (the R210 million) the quarterly report states: “Department to implement corrective measures in terms of Budget Policy”.

No indication is given of where the revenue will come from to cover this cost, which is expected to continue at the same rate at least until the end of the year.

It seems the City’s intention is to off-load the cost of the infrastructure on to the new service provider.

Bidders Moneyweb has spoken to are reluctant to take over PEU’s infrastructure, which they say does not comply with the relevant standards. They maintain any bidder that buys it will have to replace it anyway.

They further ask how they are supposed to calculate their tenders if they don’t know the price of the PEU infrastructure.

The City of Tshwane would not comment on the criminal charges against Ramokgopa and Ngobeni.

Its blatantly obvious that the Tswane City fathers don’t have a clue as to what they are doing – or supposed to be doing.
Follow the money to see who is being (wrongly) enriched here!
What is happening in Pretoria is happening all over the Country – to a greater or lesser extent – failing Municipalities who continue to steal and waste billions of Rand every year – and nothing gets done about it!
Only when rate payers – en masse (as with the e toll saga) stop paying their rates and taxes will the ANC led Municipalities sit up and take note, only when their own salaries are not paid will they listen!

Will be suspended shortly on full pay then will resign, no investigation and will pop up in the future as head of some parastatal. (Pockets loaded)

That’s if there are any parastatals left after the ANC circus has destroyed them!