How Bosasa came to capture the prison systems in SA is likely to feature in the next instalment of the Zondo report; whistleblower Angelo Agrizzi paid a heavy price for his testimony.
By Ciaran Ryan 8 Feb 2022  00:01 Two years on, and Agrizzi says he still suffers from nerve damage to his feet and hands. Image: AdobeStock

To this day, former Bosasa chief operations officer turned whistleblower Angelo Agrizzi cannot understand why the state decided to arrest him while he was spilling the beans on the dirty dealings and bags of cash flying out the door at Bosasa’s Krugersdorp headquarters.

The arrest warrant was served on October 14, 2020, just as his first book Inside the Belly of the Beast – The Real Bosasa Story (Truth Be Told Publishers, November 2020) was about to be published. This was despite Agrizzi and other whistleblowers providing towers of evidence to the Zondo Commission of Inquiry into allegations of state capture.

“I was blindsided by the arrest,” Agrizzi tells Moneyweb.

He was arrested the same day as former ANC MP Vincent Smith, one-time chair of the National Assembly’s Portfolio Committee on Correctional Services, who had allegedly received R800 000, paid by Bosasa into his company Euro Blitz 48 in 2015 and 2016. Agrizzi claimed Bosasa also covered the costs of upgrades to Smith’s house. Smith has maintained that the money was not a bribe, but a loan for his daughter’s education.

The irony is that Agrizzi provided the evidence that led to Smith’s arrest. In return, he fully expected whistleblower protection from the state, especially as he had followed instructions given out to him by law enforcement that would guarantee his safety.

It’s treatment like this, says Agrizzi, that prevents others coming forward with damning testimony that could pull the country back from the abyss.

But there were other attempts to silence him, as detailed in Agrizzi’s second book, Surviving the Beast – The Ugly Truths About State Capture And Why They Tried To Kill Me (Truth Be Told Publishers, September 2021). 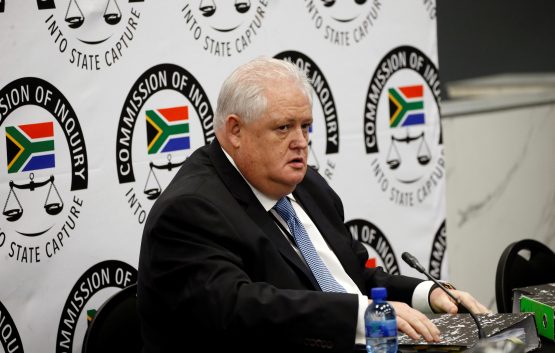 Agrizzi was denied bail and then hurriedly escorted by a dozen or more armed security guards to a remote wing of Johannesburg Central Prison, otherwise known as Sun City. He was already in poor health, undergoing treatment for a list of ailments from diabetes to hypertension. The guards removed his oxygen machine, which was returned to the cell once Agrizzi protested that he needed it to breathe.

In his book, Agrizzi describes his first night in Sun City prison when two people entered his cell. He felt a hand on his neck, as if feeling for a pulse, and then the unmistakeable smell of almonds (often associated with cyanide poisoning).

His next memory is being pushed on a gurney through the corridors of Baragwanath Hospital, retching in agony.

When he insisted the bed in which he was lying was shocking him, he begged the six armed guards in the room to remove the plug from the wall. The guards sniggered, insisting he was hallucinating, though there were no signs of barbiturates or psychedelic-inducing drugs in his body.

One of the guards eventually kicked the plug from the wall and immediately the shocking stopped.

“I suppose I have always known that something like this was inevitable, from the moment I decided to become a whistleblower,” he writes in Surviving the Beast.

“I should have been wiser and more vigilant. I had angered too many people and now it was payback time.”

The Zondo Commission had received intelligence that Agrizzi was marked for death. Doctors at Baragwanath later told Correctional Services that he was inches from death, and insisted he be transferred to Life Fourways Hospital for specialist emergency care.

It’s a long and harrowing story, detailed in his autobiographical account.

Two years later, Agrizzi says he still suffers from nerve damage to his feet and hands. On October 30, 2020, he was granted bail and the shackles were removed from his feet, though it would be a week later before he was released from the hospital – 52 days after being incarcerated at Palm Ridge Magistrates Court.

In August 2016, says Agrizzi, he had had enough of working at Bosasa and tendered his resignation.

The moral burden of finishing daily prayer meetings by packing bags full of cash to pay bribes to key political figures became too much.

The final straw was a conversation overheard between Bosasa CEO Gavin Watson and a man called Louis Passano, who was trying to procure about 80 cattle calves “to further capture SA’s former president, Jacob Zuma,” he writes.

The “Nkandla Cattle Saga” was a plan hatched by Watson and Passano to extend their capture of the then president, having already pocketed much of the Correctional Services food supply budget.

Employees were getting restless, fearing their jobs were about to evaporate. They’d seen the bags of cash fly out the door. Bosasa quickly graduated from prisons catering to a services company involved in facilities management and the supply of thousands of items to more than 40 correctional services units, from equipment supply to catering, fencing and IT.

Much of this evidence is before the Zondo Commission and will likely be detailed in its next report due out in a few weeks: the R800 million prisons catering contract, for which Agrizzi alleges bags of cash were handed out to Patrick Gillingham, former CFO at Correctional Services, and Linda Mti, formerly national commissioner for the same department.

Most tenders in SA are predetermined, claims Agrizzi in his earlier book, Inside the Belly of the Beast. “The tender advert is nothing more than a formality to prove that other companies were given a chance to bid before the tender was awarded. The tenders that Bosasa won were no different.”

Agrizzi was a master at his craft, quickly establishing during a tour of Boksburg prison in Gauteng that meals that should cost R7 a person per day were costing R12.

Bosasa might have been corrupt to the core in securing tenders, but Agrizzi claims it never failed to deliver decent nutrition to the prisoners it was charged with feeding.

That’s not to say its invoices weren’t padded, but at least prisoners got a good meal. Before Bosasa came on board, the prisons system was handling up to 10 food-related court applications a week from disgruntled inmates.

Bosasa ended up feeding 144 000 prisoners in 37 facilities countrywide, and Agrizzi insists they handled this with efficiency and few complaints.

Agrizzi told the Zondo Commission that Bosasa paid Kevin Wakeford, formerly head of Armscor, R100 000 a month as a consultant, in part to bring his influence to bear on the South African Revenue Service (Sars) over an investigation into a Department of Home Affairs contract over the management of the Lindela Repatriation Centre in Krugersdorp, a deportation facility for illegal migrants.

When Wakeford took the stand at the commission, he refuted most of the allegations levelled against him by Agrizzi, saying he earned R50 000 a month for nine years, not R100 000, and accused Agrizzi of twisting facts to rope him into an enquiry where he did not belong. Wakeford also accused Agrizzi of trying to destroy Bosasa and force it into liquidation so that he could take over its clients, something Agrizzi denies.

Former Bosasa fleet manager Frans Vorster told the enquiry how Watson had instructed him to bump up profits at Lindela. This was not hard to do – just pack the centre with detainees.

Bosasa was paid a daily rate per occupant, so it had an incentive to ship as many illegal migrants to the facility as possible – which it apparently did, using vehicles that looked like SA Police Service vehicles used to transport prisoners.

At one point Bosasa was making upwards of R100 million a year from managing the facility, even though the number of detainees had dropped by about half the level of the early 2000s.

In all, Bosasa is reckoned to have made more than R12 billion in corrupt government contracts.

To keep this going, the company had to pay out between R4 million and R6 million a month in bribes, according to testimony before the commission by former Bosasa CFO Andries van Tonder, who has also turned whistleblower.

These allegations have been denied, but Agrizzi says he was there – counting and packing the bags full of cash for distribution to Bosasa’s ever-expanding network of recipients, under instruction from his seniors.

Agrizzi’s books – the first of which was longlisted for The Sunday Times/CNA Literary Awards 2021 – detail how Myeni apparently dodged a court-ordered search and seizure warrant at her Richards Bay home, allegedly thwarted by compromised officials within the Hawks and with a little help from her protector, Zuma.

Myeni gave the Zondo Commission the runaround by failing to appear, and then when she did, refusing to answer questions put to her by evidence leader Kate Hofmeyr on the grounds that she may incriminate herself.

It remains to be seen how the Zondo Commission treats this testimony.

Asked how he survives these days, Agrizzi says he has virtually nothing left, his once sizeable fortune having been frittered away on legal fees, medical bills, and looking after some of the families left jobless after Bosasa went into liquidation.

It’s concerning, says Agrizzi, that those implicated in his evidence have evaded arrest and how charge dockets have ended up in the hands of people accused of serious crimes.

Watson, an anti-apartheid icon and rugby hero, died in a car accident in August 2019 when the Toyota Corolla he was driving ploughed into a pillar at the entrance to OR Tambo International Airport in Johannesburg.

Agrizzi’s story is a troubling one, detailing the intersection of SA’s criminal and political worlds and proving that love of money, as Timothy warns in the Bible, is indeed the root of all evil.

Read: I was groomed for corruption – Agrizzi