CPS’s proposal to be paid R66.70 per social grant beneficiary has been rejected by finance minister Nhlanhla Nene.
By Ray Mahlaka 3 May 2018  00:10 National Treasury has rejected Cash Paymaster Services’s (CPS) proposed fee increase for the payment of social grants to 2.5 million beneficiaries over the next six months, which would have scored it a R1 billion bonus.

For the first time, CPS has revealed in court papers that it requested Treasury increase its fee to pay social grants from R16.44 per beneficiary to R66.70 (including VAT) under a new contract with the South African Social Security Agency (Sassa).

In March, the Constitutional Court granted a further six-month extension to Sassa’s invalid contract with CPS for the distribution of cash to a portion (2.5 million) of the 10.7-million social grant beneficiaries. The South African Post Office and Sassa are responsible for social grant payments to the remaining eight million beneficiaries from April 1.

CPS’s fee proposal of R66.70 per beneficiary means it would have scored R166.7 million per month or R1 billion for the six months of its contract, which expires in September 2018. However, finance minister Nhlanhla Nene on behalf of Treasury has instead recommended a fee of R51 per beneficiary, reducing CPS’s payment to R765 million. In court papers submitted to the top court on Thursday, Nene said CPS can further lower its fee to R46.46.

The last methodology used the inflation rate increase difference at the time when CPS was awarded the Sassa contract in 2012 to the inflation rate projected for the 2018/19 financial year (referred to “adjusted original tender prices”).

See the fee proposal for each methodology below: 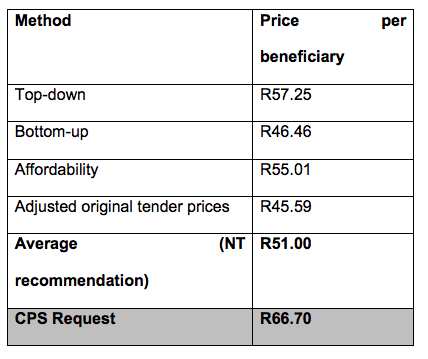 Sassa’s new acting CEO Abraham Mahlangu, who filed the agency’s first monthly report on Monday as required by the  Constitutional Court, said CPS is yet to sign and agree to Treasury’s fee proposal.

CPS first mentioned the fee increase in March, when it became clear that Sassa had failed to find another service provider that would administer cash payments.

CPS director Nunthakumarin Pillay said if Sassa paid it the same fee of (R16.44 per beneficiary) under the extended contract, CPS would operate at a loss of at least R70 million a month or R420 million for six months.

The 2.5 million elderly and disabled beneficiaries that CPS pays don’t own bank accounts but access their social grants in a physical cash format via armoured vehicles kitted with its biometric UEPS/EMV technology belonging to CPS.

Pillay said reducing the number of social grant beneficiaries under the extended contract (from 10.7 million to 2.5 million) and keeping the same price as before (R16.44 per beneficiary) would result in reduced revenue and higher operating costs.

The costs associated with running its grants distribution services include salaries, security for cash-in-transit vehicles at pay points, insurance vehicles, equipment maintenance and more. “This loss [R70 million a month] will increase as the number of beneficiaries paid at pay-points declines,” said Pillay.

I am not a fan of CPS but look at it from their point of view. For a few years they have been told that their contract will be terminated, then renewed for a short time. Now they are supposed to serve a fraction of the previous number of people, and the icing on the cake is that they are left with the most inaccessible customers, the PO taking over the easy cases. What are they supposed to do with their workers? If they fire most of them they can expect strikes, and they are still expected to do the job unlike civil servants. Can we expect in case of future tenders that instead of a company tendering the state picks a company and tells them to do a job for the price determined by the state?

I’m sure CPS management knows what they are doing with their recent bid, but the government keeps messing with CPS and hurting their reputation after they did a flawless job at distributing the grants. When CPS leaves I don’t think there will be any other company that can provide the rural cash payments without offline capabilities and the necessary equipment. I wonder what they will say when CPS leaves and no one meets the specifications of the bid, then SAPO or SASSA totally screw up the cash payments distribution.