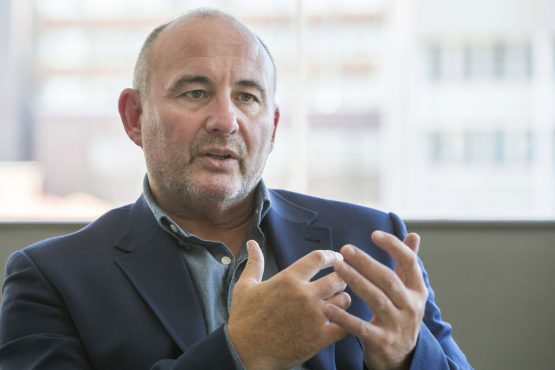 Woolworths chief executive Ian Moir will be stepping down from his position at the retailer in mid-February. He will be replaced by Roy Bagattini the president of clothing company Levi Strauss Americas.

Moir announced last year that he would be heading to Australia to oversee the turnaround plan of David Jones, the disastrous investment which saw Woolworths losing just under R12 billion of the initial R21.4 billion that it invested in the Australian brand.

Bagattini will take over the reins from February 17.

“In order to facilitate a smooth transition, Ian will be working closely with Roy and will also continue in his role as acting CEO of David Jones,” the company said in a Sens announcement on Tuesday morning.

Bagattini, a South African, has extensive experience in the retail industry, with a career spanning over 19 years in international markets. Prior to his present role, he was the president of Levi Strauss’s Asia Pacific, Middle East and Africa operations from 2013 to 2016.

Prior to that, during 2009 to 2013 he headed up the global brewer Carlsberg Group’s Asia and Africa operations, while also having held various executive positions at SABMiller internationally and in South Africa.

“In addition to leading numerous merger and acquisition projects during the course of his career, he has spearheaded the turnaround of several companies and successfully driven their growth and expansion,” said Woolworths.

“Roy has extensive operational, management and turnaround experience in global consumer and retail markets, which will prove invaluable as we continue to navigate the structural changes taking place in the retail sector and the challenges particular to our group,” said chairman, Hubert Brody.

“Roy’s leadership will continue to drive the future strategy for the group. The board welcomes Roy and looks forward to his contribution,” Brody added.

The board also thanked Moir for his leadership of the Woolworths Group over the past nine years.

This is such bs, executives ruining companies and wasting shareholders money, then escapes to Australia without any consequences. Something needs to be done by this corporate betrayals.

That’s business… Execs promise the boards shareholders value that they themselves are not sure if it is attainable… They do it because of their egos are too big to feed. But they are clever enough to draft contracts that make them win even when the company loses. The shareholder is always the sucker who carries the brunt… That’s business I guess. Let’s wish Bagattini the best but we know the economy is not doing so great he needs luck on his side.

Will Moir be expected to return to SA after his stint in Australia ends?

He is just a Gupta that went to private school and Harvard University.

Hopefully, he has a deeper understanding of why his previous strategy failed and a roadmap to resolve the crisis that has seen Woolworths shed over 50% of its market value under his guidance.

With the current tragic burndown around Australia, could the phoenix be set to rise from the ashes?

Kudos to Ian for showing integrity and accountability by addressing the problem area directly. An outstanding example of good governance for other SA corporates and institutions!

One of the problems is the disastrous over-payment for the outstanding shares buying out Solomon Lew. Paying Aus$17 per share that Lew a short while before had paid Aus$4. What integrity and accountability will Moir be showing on that and how will he address the problem directly on that issue, which is part of the current problem?

I am sure a lot of people from senior management used the opportunity to emigrate to Australia with all expenses paid and all red tape taken care of.

To what extent was the Chairman Hubert Brody as well as other board members involved in the ill-fated Australian adventure..? Surely Moir was not solely responsible for this huge destruction in shareholder value…! He also did not pay himself as far as I can tell the R190m over the past 5 years…

The word you are looking for is “cahoots” used as “in cahoots” or “thick as thieves”. Thanks shareholders, I am ok Jack.

Moir will end up owning David Jones for a fraction what WW paid ….. all part of the “grand plan”.