After he rejected an application seeking his recusal.
By Promit Mukherjee, Reuters 16 Dec 2020  13:06 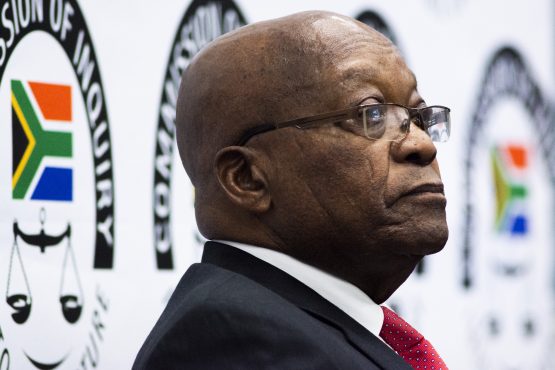 Former South African President Jacob Zuma on Tuesday filed a legal challenge against the judge who refused to recuse himself from an inquiry into state corruption, his lawyer confirmed.

The country’s Deputy Chief Justice Raymond Zondo in November rejected an application by Zuma’s lawyers seeking his recusal from the corruption case on allegations of bias.

He rejected the application on grounds Zuma had failed to establish that he was biased.

Zuma was removed as president in 2018, a year before his second term was due to end. A number of witnesses at the commission of inquiry, headed by Zondo, have implicated him in alleged wrongdoing during his nine years as head of state.

Zuma has denied the allegations.

After his application was rejected last month, Zuma and his legal team left the court abruptly even though he was supposed to start his testimony on the day.

Judge Zondo has now ordered him to reappear in front of the inquiry committee in January next year. He is also asking the Constitutional Court, the highest legal authority in the land, to compel Zuma to attend and “account for his exercise of public power”.

For a guy who pleads poverty he sure can accumulate legal bills, i’d love to know if all his previous counsel actually got paid in the end. Somehow I doubt it.

Perhaps the guys in Dubai are lending their old friend a hand?

That (who pays the legal fees) sounds like a matter of Public Interest! Lawyers don’t work for the cause, whether a criminal or righteous cause

Is there a PAIA that one can file for this?

This soapie-circus will drag on and on

When Jacob finally goes to jail he’ll be to old. The anc and the npa must focus all there efforts on comrade Ys. He’ll be around for too long and will cause havoc everywhere he goes. Bloemfontein is down the drain – literally

Wasting more of our tax money…

Old Zupta up to his tricks again. Trying to delay/circumvent Zondo’s commission. He (Zupta) won’t answer any questions anyway. When asked to state his name, he’ll reply: “I refuse to answer this question on the grounds that it may compromise my standing in the community. Stop trying to intimidate me with such far reaching and complex questions”.

Can you imagine his response if he was ever asked to recall How Much it cost to upgrade Nkaaaandla.
Answer: Eish!

Gee wizz, is this obviously delusional psychopath still on the loose ?
He should have been captured and stored away safely in the tax payers funded bombproof shelter below his residence in Nkaaaaandla, a long time ago.

I hope we are.not paying this clown’s legal fees. Maybe the DA or Afriforum should investigate. In any case this is all academic. In the highly unlikely event he goes to jail he will immediately be pardoned or let out on “health grounds”. All a waste.of time and money!

Expat : as consolation, by now EVERYBODY knows he and his clan are crooked.

1. Which banks provide banking services to any Zuma family member and by extension of FICA provides services to an entity (trust or company) where a Zuma is a shareholder or beneficiary is an eventual warm body. If they do, they should not be ashamed to admit. We will flock to them, promise..
2, same for law firms,
3. same for accountants.

Stand and be counted!

Any of his clan must be “politically exposed persons” on the hot list of any FATCA subjected global financial services firm and any SOE such as IDC.

This quack wanted his day in court and is now doing everything possible to evade the big day.

All these court applications are irrelevant.

Baloyi at the NPA must charge him and then arrest him. Pick one of many crimes (the latest charge laid by Zondo at a police station, for Zuma walking out of the commission, is as good as any other).

If the NPA wants to do it, it can. And if the NPA does not want to do it then it must issue a nolle prosequi certificate and Afriforum can step in.

Nothing will happen to him or the Jack of Spades.

As long as Korporaal Peehaus and the cook boy is around they are all free men.

I will bet my bottom dollar the lawyers on both sides get together every week planning how long the can spin this out..

Zuma should take up an outdoor activity and take a hike!