Yet one year on, the technology titan has lost a whopping $344 billion in market capitalisation – the biggest wipe-out of shareholder value globally, according to data compiled by Bloomberg.

Shortly after the now infamous speech, Beijing suspended the listing of its fintech arm Ant Group and has since followed up with a widespread crackdown on the country’s most vibrant sectors – causing Chinese stocks to tank. 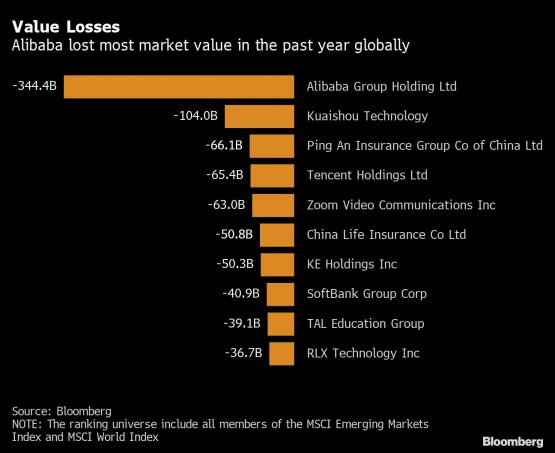 Alibaba shares sank from an all-time high that month to a record low three weeks ago in Hong Kong, as Beijing stepped up its scrutiny of the company’s practices and urged a restructure of its fintech business.

Bloomberg Intelligence expects fiscal second-quarter active users at the e-commerce giant to have beaten consensus projections as a result of China’s zero-Covid policy. Alibaba is set to reporting earnings on Nov. 5.

Yikes! Errr …. double YIKES!!! Perhaps President for Life Xi will learn the lesson – if it ain’t broke, don’t try to fix it.

Let business do what business does best, create work, prosperity and a better society. All politicians want is power and control, and like the Jack Russell terrier chasing the car, once it stops it doesn’t know what to do with it.

Forward to the ANC, EFF and about a thousand others on the voting list for November 1.

Some also recommended City Lodge @R4 or R5 but they do not tell that the share was been diluted by 10 times (one did explain it – thank you), thus it is still more expensive then R40 a few years ago.