Alibaba jumps as much as 6.5% amid tech rally ahead of earnings

The stock is on track for a second day of gains after a visit to Taiwan by US House Speaker Nancy Pelosi sent broader markets tumbling this week.
By Jeanny Yu, Bloomberg 4 Aug 2022  06:41 Alibaba Group Holding Ltd. led Chinese tech stocks higher on Thursday as investors repositioned ahead of its quarterly results, though caution remained about a number of potential roadblocks ahead.

Shares of the e-commerce giant gained as much as 6.5% in Hong Kong, among the best performers on the Hang Seng Tech Index, which advanced as much as 3.4%. The stock is on track for a second day of gains after a visit to Taiwan by US House Speaker Nancy Pelosi sent broader markets tumbling this week.

The rebound across tech comes as investors have started to add back exposure after pricing in too much risk earlier, according to Vey-Sern Ling, managing director at Union Bancaire Privee in Singapore. An overnight rally in Chinese ADRs also provided a boost, he added.

Investors will be laser focused on Alibaba’s forward guidance when the firm reports after hours, particularly after harsh Covid lockdowns in China during the second quarter put a drag on growth. Concerns about a slowing economy, an ongoing regulatory crackdown and heightened Sino-American tensions also complicates that outlook.

Even with the two-day rebound, Alibaba is still down more than 20% this year in Hong Kong, tracking the Hang Seng Tech Index. SoftBank Group Corp. has raised as much as $22 billion in cash through the sale of forward contracts using Alibaba shares, the Financial Times reported, which would add to selling pressure down the road if SoftBank opts against buying back the Alibaba shares.

Here are three charts showing the hurdles ahead for Alibaba’s stock: 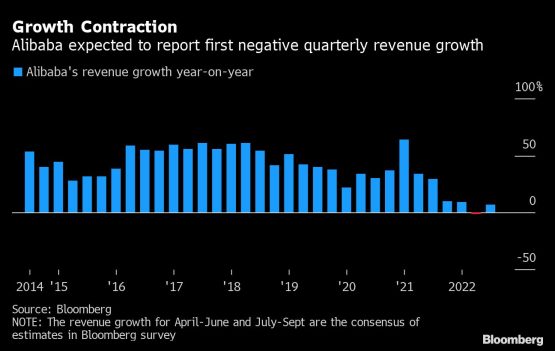 Analysts expect Alibaba’s April-June sales to fall 0.9% from a year earlier, marking its first-ever quarterly revenue contraction. Some analysts are also focusing on cost-cutting measures and investment spending plans in the company’s results. Alibaba’s more than 21% slump from a July high has put the stock near technically oversold territory. Shares have fallen below both 50-day and 100-day moving averages, which had been providing some support. A fresh regulatory penalty on past deals, a reported probe on data leaks and a soft macro economy have sent the stock tumbling. News that co-founder Jack Ma was planning to cede control of Ant Group also created uncertainty. Investors are trying to gauge how much Alibaba’s businesses can recover in the coming quarters after China started easing quarantine rules and vowed to support the economy. Geopolitical tensions and global recession worries have stalled a recent uptick in analysts’ profit projections, sending the company’s 12-month forward earnings estimate back toward 2019 levels. It will be allowed to correct ‘perceived gaps’ in its application. 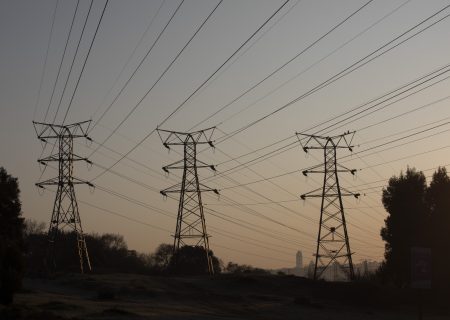