Its shares slid about 2% in Hong Kong, shedding part of the 5.2% gained on Thursday before the results. Revenue shrank for the first time on record in the June quarter, albeit by a fractional amount that was less than analysts projected. The contraction marked an official end to a decade of sizzling growth for China’s internet giants, which began to wind down in 2021 when regulators slapped curbs on a range of sectors from e-commerce to social media.

China’s e-commerce leader reported revenue of 205.6 billion yuan ($30.4 billion) in the June quarter, enough to beat projections for 204 billion yuan. Net income fell 50% to 22.7 billion yuan, even after Alibaba trimmed losses at newer businesses like local services and the cloud.

Alibaba is still grappling with the fallout from nationwide Covid-related lockdowns and a near-economic contraction in China. Smaller rival JD.com Inc., which escaped the worst of Beijing’s crackdown, is overtaking Alibaba in sales growth, while up-and-coming competitors from ByteDance Ltd. to Pinduoduo Inc. are drawing users away. Still, consumption began recovering from June and quickened in July, Chief Executive Officer Daniel Zhang said.

“The results signal resilience in the face of regulatory fears and domestic economic headwinds,” said Rohan Reddy, director of research at Global X Management Co. “Chinese tech stocks still have room for recovery with valuations at attractively cheap levels and an easing policy environment continuing for the foreseeable future. But there is still a dose of caution, as investors get a little spooked from time to time.” 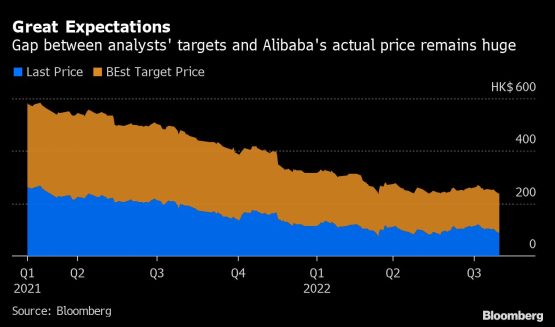 Alibaba is also managing a series of run-ins with regulators. These range from antitrust fines to tax evasion probes, but have culminated in China’s largest recorded cybersecurity breach, which experts linked to Alibaba’s cloud business. That division grew sales 10% in the quarter, the slowest pace on record.

Abroad, the US added Alibaba to a growing roster of companies facing removal from US stock exchanges, because of Beijing’s refusal to permit American officials to review their auditors’ work. The company is seeking a primary listing in Hong Kong that would enable it to tap more mainland investors, while also maintaining its listing status on the New York Stock Exchange.

Once the most valuable company in China, Alibaba has seen its market value tumble after Beijing launched its sweeping crackdown on the private sector more than a year ago. The government forced Alibaba’s finance affiliate, Ant Group Co., to call off what would have been the world’s largest initial public offering in 2020, and then launched reforms that have undercut Alibaba’s business model.

Following a ferocious crackdown on the country’s most prominent billionaires, Alibaba’s co-founder Jack Ma has made significant concessions to appease Beijing. Last week, Ant said in a filing that Ma will cede control over the fintech arm and reduce his Ant shareholding over time to a percentage that does not exceed 8.8%. He currently holds 50.52% voting rights in Ant.

The move, likely to reduce some of Alibaba and Ant’s regulatory headwinds, has weighed on Alibaba shares, on fears that a leadership change could further delay Ant’s initial public offering. Ma’s retreat also raises questions about his internet empire just as China enters a period of unprecedented uncertainty.

“It has been a choppy few months for Alibaba, like two steps forward, one step back,” said David Waddell, CEO and chief investment strategist at Waddell & Associates. “The report is a confirmation that there’s a value here for investors who are patient.”

Alibaba’s shift to providing more cost-efficient e-commerce services for existing users in mainland China could ease price competition among major companies such as JD.com, Meituan and Pinduoduo into 2023. The company may streamline services and scale back expansionary moves for newer businesses, such as those related to grocery and food deliveries, to reduce cost burdens should revenue rise less than 6% above 2021’s level through December.

Revenue from Alibaba’s core China commerce division slid 1% during the quarter — the first contraction on record.

In response to slowing growth, Alibaba said in May it will take a “more disciplined” approach to spending and scale back expenses in areas that aren’t generating long-term value. This shift — in line with Beijing’s incentives — marks a major shift from the aggressive and wide-ranging market-share grab that characterized the e-commerce giant in the past.

Adjusted earnings per ADS of 11.73 yuan beat estimates for 10.33 yuan, reflecting those efforts.

“Starting in July, we are seeing a gradual recovery of business performance compared to June, especially in the relatively more impacted categories in the past few months such as fashion and electronics,” Zhang told analysts on a conference call.

Alibaba has also turned increasingly outward, building Southeast Asian arm Lazada, Trendyol in Turkey and Daraz around South Asia into important units of the company. It has outlined a long-term goal of quintupling Lazada’s gross merchandise value, the sum of transactions across its platforms, to $100 billion.

“While Alibaba has indicated that it will be focusing on costs, I think the magnitude of its leverage still surprised the market,” said Vey-Sern Ling, an analyst with Union Bancaire Privée. “There will be positive read-through for the rest of China internet companies who will have similar cost focus, especially given the new regulatory environment.”