Apple’s latest iPhones won Wall Street over by dint of lower prices and a major design overhaul, fueling expectations of a new cycle of sales growth for the world’s largest corporation.

At a virtual event on Tuesday, the company showed off the iPhone 12 in black, red, blue, green and white with a 6.1-inch screen, part of the biggest re-design of Apple’s signature device in three years. It starts at $799 but a smaller version, the iPhone 12 mini, costs $699.

Analysts praised a pricing strategy that may entice users with older, smaller iPhones to upgrade. They were also bullish on Apple’s ability to take on rivals like Huawei Technologies in China, the world’s largest smartphone arena, where 5G networks are considerably more built-out than in Europe and the US.

“The pricing dynamics are the killer app for the phone launch,” Harsh Kumar of Piper Sandler & Co. wrote in a research note. “Pricing was lower than our expectation, which is important in the current global pandemic.” Cheaper devices may help increase Apple’s installed base of devices, driving further growth of more profitable services, he added.

The front of the phones look similar to last year’s iPhone 11, but the edges are now flat instead of curved. They all support 5G, a new wireless standard that can transmit data as much as 10 times faster than the current 4G LTE technology.

The handsets have a faster A14 processor and updated cameras, and use sharper OLED screens, an improvement from cheaper LCD screens used in earlier models, Apple said. The company showcased major improvements to the iPhone 12 Pro Max cameras, including high dynamic range video recording and larger sensors for improved low-light photography.

The Cupertino, California-based technology giant has generated relatively little sales growth from its marquee product in recent years as consumers hold onto their phones for longer. Quarterly revenue from this segment peaked in the first quarter of Apple’s 2018 fiscal year. Apple shares slipped 2.7%, giving up gains of more than 6% from Monday ahead of the event.

“With our estimation that 350 million of 950 million iPhones worldwide are currently in the window of an upgrade opportunity, we believe this will translate into an unprecedented upgrade cycle for Apple,” Dan Ives, an analyst at Wedbush Securities, said. 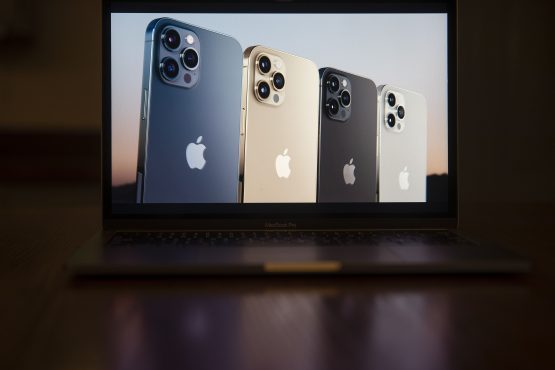 5G support makes the phones theoretically capable of downloading data much faster, although that will mostly depend on wireless carriers updating their networks. Apple’s 5G launch comes over a year after Samsung Electronics and other rivals started selling handsets supporting the standard.

Apple said it tested 5G globally with 100 carriers. It added that the US models will support faster millimeter wave technology. Verizon Communications Inc. Chief Executive Officer Hans Vestberg joined the event to announce nationwide 5G coverage in the US and an expansion of its fastest, ultra wideband 5G service, which relies on millimeter wave spectrum.

Citi analyst Jim Suva said the inclusion of millimeter wave in all US iPhone 12 models was positive because there was concern before the event that this functionality would only be available in the higher-end devices.

In the first quarter of this year, phone makers led by Samsung shipped 3.4 million 5G phones in the US, a fraction of the overall market, Strategy Analytics data show. In a few other countries, 5G has performed far better. A third of phone sales in China during the second quarter were 5G handsets, according to Counterpoint Research.

Tests by IHS Markit’s RootMetrics across 125 US areas in the first half of 2020 showed that 5G speeds on AT&T Inc., T-Mobile US Inc. and Sprint are only slightly faster than 4G LTE. AT&T and T-Mobile, which bought Sprint, have both claimed their 5G networks are available “nationwide,” a metric that means they can reach 200 million people, but coverage is still often sporadic and data speeds are not consistently faster.

The handsets also support a new version of wireless power and accessory connectivity called MagSafe. This lets the phones attach magnetically to new charging pads from Apple and other providers. Apple will also offer several new cases to support the new charging system.

Apple didn’t include headphones or a charging adapter with the new iPhones, a move it said would be beneficial to the environment. Citi’s Suva said excluding the accessories in the box could spur purchases of AirPods and new charging accessories.