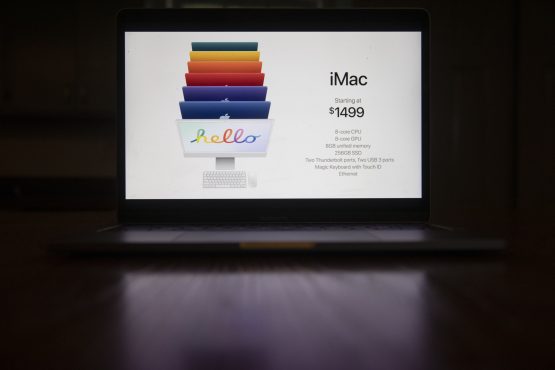 Pricing for the Apple iMac computer during the Spring Loaded virtual product launch in Tiskilwa, Illinois, US, on Tuesday, April 20, 2021. Image: Daniel Acker/Bloomberg

Apple rolled out the first redesign of its flagship desktop iMac computer in almost a decade, showcasing its latest machine with in-house designed chips instead of those made by Intel Corp.

The Cupertino, California-based technology giant showed off the new iMacs, which come in a new 24-inch screen size, up from 21.5-inches on the previous entry-level model, Tuesday at its product event. The new iMacs are far thinner than their predecessors and have slimmer edges. They also come in seven different colours, have a 1080p camera, better speakers and improved microphones for video conferencing.

The computers run Apple’s M1 custom processor that was first released in the MacBook Air, entry-level MacBook Pro and Mac mini last year. By shifting the iMac to its own processors, the company has now replaced Intel chips for its own designs in most of the Mac line. Apple plans to launch higher-end MacBook Pros with its own chips later this year and well as a smaller Mac Pro desktop computer with an Apple processor by next year, Bloomberg News has reported. Taiwan Semiconductor Manufacturing Co typically makes Apple’s chips.

The new iMac starts at $1 299 compared with $1 099 for the previous model with Intel chips. Apple last redesigned the iMac in 2012. The company didn’t announce upgrades to the larger and more powerful iMac models.

The new machines also include a upgraded power adapter that can magnetically attach to the back of the iMac and four USB-C ports. The company is also offering three new keyboard options for the new iMacs: a standard colour-matched one, a keyboard with a Touch ID fingerprint scanner, and another with a fingerprint scanner and a number pad. The company is also offering new mouses and trackpads that are colour-matched to the iMacs.

While much of the computer industry focuses on laptops, the iMac remains a key part of Apple’s portfolio. The first iMac, launched in 1998, has been credited with helping Apple escape bankruptcy and steer a path toward becoming the world’s most valuable company. The all-in-one desktop line is popular with professionals and consumers seeking large screens at relatively affordable prices.

The launch of new iMacs comes as businesses and schools begin to re-open after vaccines for Covid-19 have become more readily available in some countries. Some business may require new equipment for those returning to the office, which could boost sales of the iMac.

The Mac line generated about $8.7 billion in the fiscal first quarter ended in December, the most during a holiday period in years. Bloomberg News reported on the new iMac design earlier this year.