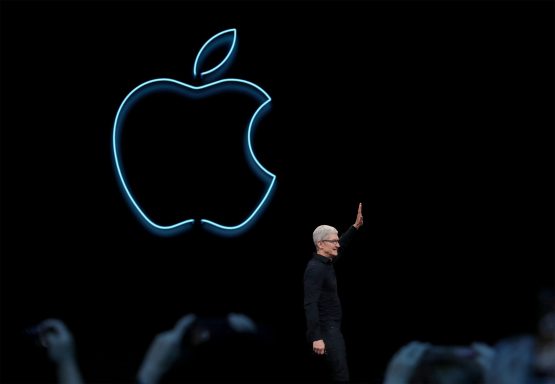 Apple Inc. executives previewed its upcoming mixed-reality headset to the company’s board last week, indicating that development of the device has reached an advanced stage, according to people with knowledge of the matter.

The company’s board, made up of eight independent directors and Apple Chief Executive Officer Tim Cook, convenes at least four times a year. A version of the device was demonstrated to the directors during the latest gathering, said the people, who asked not to be identified because the meeting was private.

In recent weeks, Apple has also ramped up development of rOS — short for reality operating system — the software that will run on the headset, according to other people familiar with the work. That progress, coupled with the board presentation, suggests that the product’s debut could potentially come within the next several months.

The headset, which combines elements of virtual and augmented reality, is Apple’s next big bet. It represents the company’s first major new product category since the Apple Watch in 2015 and would vault the tech giant into a still-nascent industry — one currently dominated by Facebook owner Meta Platforms Inc. Apple is seeking new ways to expand its devices business, which makes up about 80% of annual sales. 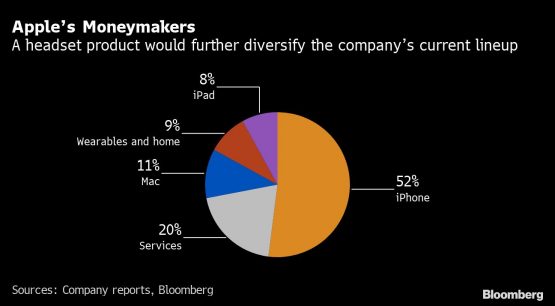 Apple has aimed to unveil the headset as early as the end of this year or sometime next year, with a consumer release planned for 2023. It targeted an introduction at the Worldwide Developers Conference in June, but challenges related to content and overheating have led to potential delays, Bloomberg has reported. The company declined to comment on plans for the headset.

Apple’s sales have been soaring, hitting record levels in recent quarters. But supply-chain snags and concerns about slowing consumer spending have weighed on its stock. The shares are down about 23% this year — part of a broader tech slump — including a 2.6% dip on Thursday.

The iPhone maker’s board has typically been the first group outside of Apple’s regular employees to see future products. Executives demonstrated the Siri voice assistant to the Apple board several weeks before its public introduction in 2011, around the time that Steve Jobs resigned as CEO.

The headset features advanced processors — on par with those in Apple’s latest Macs — as well as ultra-high-resolution screens. Though the first model will offer both VR and AR, the company is also working on stand-alone AR glasses, codenamed N421, for release later this decade. Unlike VR, augmented reality overlays digital information and images on top of the real world.

The current device, codenamed N301, has been in development since around 2015. Mike Rockwell, a company vice president, has spearheaded the project, which is also overseen by Dan Riccio, Apple’s former head of hardware engineering. The company has about 2,000 employees working on the device as part of a team known as the Technology Development Group, or TDG.

The group is staffed with former hardware and software engineering leaders for the iPhone, iPad and Mac, in addition to key hires from NASA and industries spanning gaming, graphics and audio. But the division has suffered departures of some key engineers to Meta and other companies in recent months.

The team developing the device works from offices in Sunnyvale, California, a few miles from the company’s Cupertino headquarters, Bloomberg has reported. The device has faced several challenges during development, such as finding compelling applications and content. Technical hurdles also included overheating and refining the device’s on-board cameras.

The company has been working on AR versions of its core iPhone apps for the headset, as well as new apps that will handle tasks such as streaming immersive content and holding virtual meetings.

Apple’s headset was originally planned for an unveiling in 2019, with a release coming in 2020, Bloomberg reported at the time. Apple later aimed to announce it in 2021 before a release in 2022, only to delay those plans again into later in 2022 or 2023.

During its development, the device faced pushback from former chief designer Jony Ive, who didn’t believe Apple should release a headset that would take people out of the real world. Ive, who left Apple in 2019, preferred the concept of augmented reality-only glasses, but that product wasn’t going to be ready until much later.

Ive also spurned a plan for the headset to have both a stand-alone mode and an option that would make the device more powerful when wirelessly paired to a processing hub in the wearer’s home. That plan was nixed, and current versions of the device are stand-alone only. They include a more powerful variation of the M1 chip that appears in the company’s latest laptops. In the early stages of the mixed-reality headset’s development, Apple engineers tested their AR software on HTC Vive VR headsets. The development group also designed a scaled-down headset that used an iPhone’s display, cameras and chip sets, but that device was only created for testing and the company never intended to sell it, Bloomberg reported in 2017.

When the actual headset ultimately launches, the product will step up competition with other tech giants, including Meta, Sony Group Corp. and Microsoft Corp. Meta and Alphabet Inc.’s Google are also working on stand-alone AR glasses for the future.

Meta is launching a mixed-reality headset in the coming months that will be similar to Apple’s device. That product, codenamed Project Cambria, will be priced higher than $800, the company said. Apple’s device could cost upwards of $2,000, according to people with knowledge of the device’s development. Last year, the company believed it would sell about one unit per day per Apple retail store.

The market for AR and VR headsets grew 92% last year to over 11 million units, according to data from IDC. Meta’s Quest 2 headset currently dominates the market, with about 78% of sales in 2021. Apple’s entrance into the category, because of its marketing prowess and product ecosystem, will likely expand the industry’s sales considerably over time.