Fueled by the unrelenting rally in Tesla shares and a broad surge in tech stocks that sent the Nasdaq 100 to an intraday record.
By Devon Pendleton, Bloomberg 28 Oct 2021  08:35 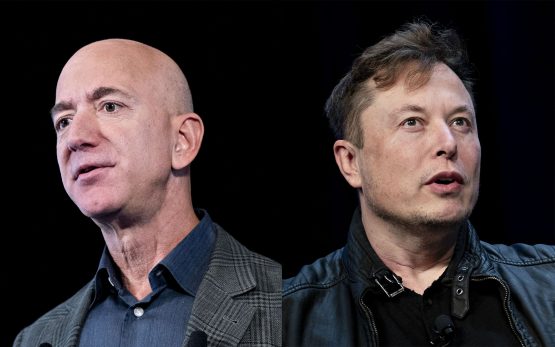 The combined net worth of Elon Musk and Jeff Bezos approached $500 billion on Wednesday, fueled by the unrelenting rally in Tesla Inc. shares and a broad surge in tech stocks that sent the Nasdaq 100 to an intraday record.

The value of the two fortunes — a sum bigger than the market value of Johnson & Johnson and about equal to that of America’s biggest bank, JPMorgan Chase & Co. — is yet another watershed moment in what’s shaping up to be a historic week for billionaires.

A groundbreaking proposal from Senate Finance Chair Ron Wyden to tax billionaires on unrealised gains was released in detailed form Wednesday morning only to be dropped in negotiations hours later. Wyden insists the billionaires’ tax plan isn’t dead, but talks have instead moved on to a possible 3% surcharge — on top of the highest income tax rate — for those earning more than $10 million.

While such a plan would draw in a larger number of taxpayers than the billionaires’ tax and help pay for a Democratic social-spending plan that could approach $2 trillion, it would take a far smaller bite from the wealthiest Americans, such as Musk and Bezos.

Under the billionaires’ tax proposal, Musk and Bezos collectively would have been hit with a $100 billion one-time tax bill, payable over five years, if the proposal had been approved, according to the Bloomberg Billionaires Index. The plan explicitly targeted appreciated public shareholdings, which have been a main driver of billionaires’ steep wealth gains in recent years.

Musk, co-founder of publicly traded Tesla and closely held rocket company SpaceX, has added $122.3 billion to his fortune this year, pushing his net worth to $292 billion, according to the Bloomberg index. Amazon.com Inc. founder Bezos is worth $196.3 billion.

The 10 richest Americans, including Bill Gates and Mark Zuckerberg, are worth a total of $1.4 trillion, according to the index.

Musk was dismissive of Wyden’s plan, saying taxing billionaires would only make a “small dent” toward paying off the US national debt.

“Spending is the real problem,” Musk said in a tweet that also included a link to an online clock that estimates the country’s debt. Even if the super-wealthy were taxed at “100%,” the government would need to turn to the “general public” in order to make for the short-fall, the Tesla Chief Executive said.

“This is basic math,” he said.

Even taxing all “billionaires” at 100% would only make a small dent in that number, so obviously the rest must come from the general public. This is basic math.

Spending is the real problem.https://t.co/1EwWyqdVsT

Musk’s wealth has ballooned partly because he hasn’t sold any of his Tesla stock for years, instead tapping banks for loans using his stake in the electric-vehicle maker as collateral. Pledging shares is a way to monetize equity without actually selling it.

Musk has $515 million in personal loans from Morgan Stanley, Goldman Sachs Group Inc. and Bank of America Corp., according to a regulatory filing from December 2020, the most recent one available with this information. Musk has also said some of his shares in SpaceX are pledged, but hasn’t disclosed details about how many.

it boggles the mind. Some of the buyers will never get their money back. The older I get the less I understand it seems.