Elon Musk might be selling, but other insiders are buying their stock Elon Musk and Mark Zuckerberg have been unloading shares in their companies, but this doesn’t mean that lots of corporate insiders are following suit. In fact, the opposite is true.

More than 1 300 corporate executives and officers have snapped up shares of their own firms during the past 30 days, a rate that’s higher than any month since March 2020, according to data compiled by the Washington Service. Meanwhile, the number of sellers stayed below this year’s monthly average.

The willingness to jump in a market where share prices have doubled in 21 months can be viewed as a vote of confidence in their businesses. Insiders have proved prophetic in the past: Their buying correctly signaled the bear-market bottom in March 2020. While the extent of current purchases is far less robust, it’s evidence that the people with the clearest insights into corporate health are seeing bargains.

“That’s a surprise that there would be such a high number of insider purchases considering the markets are at lofty levels,” said Chad Morganlander, senior money manager at Washington Crossing Advisors. “It is a watermark for individual companies that their corporate insiders see a robust future.” 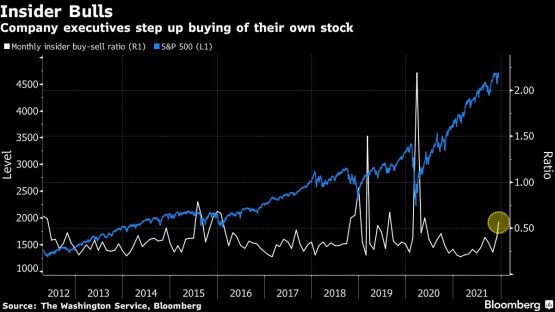 While share disposals from billionaires such as Tesla’s Musk and Meta Platforms Inc.’s Zuckerberg have grabbed attention, insider selling has stayed relatively subdued. Over the past month, there were fewer than 2 400 sellers, trailing the 2021 monthly average of roughly 2 500.

Compared to the previous two years, sales have been elevated, in part because Democrats have proposed to hike taxes for the rich to pay for President Joe Biden’s economic agenda.

“While high stock prices undoubtedly were one reason insiders sold, taxes may be another,” said Ed Yardeni, the president and founder of Yardeni Research Inc.

As is generally the norm, the numbers of buyers in the past month still lagged behind sellers. And the buy-sell ratio of 0.58 — even at a 19-month high — was nowhere near the peaking reading of 2.19 during the pandemic trough. Still, it’s an improvement from earlier this year, when the ratio dipped to a record low of 0.19.

In a period when investor nerves were frayed with the Federal Reserve turning hawkish for the first time in three years, the data may help calm some anxiety. Corporate earnings have provided one key pillar support during this bull market as firms continued to beat estimates at an unprecedented clip, overcoming hurdles from commodity inflation to supply chain bottlenecks.

Insider purchases may solidify the bull case for individual stocks, though investors should be careful not to read the increase as a green light to double down on the broad market, according to Morganlander at Washington Crossing.

“At this inflection point, it should be company specific and investors should not take a broader viewpoint of the overall average based off of that type of sentiment indicator,” he said. “You still have to contend with the hurdle of a slowdown in fiscal policy in 2022, and, of course, an ever-changing shift in monetary policy across the globe that could compress multiples.”