Where even tractors outsell EVs two to one.
By Angus Whitley and Georgina Mckay, Bloomberg 18 Apr 2021  00:54 Tesla and the electric-car industry generally thrive in the world’s richest nations. Not so in Australia, where even tractors outsell EVs two to one.

More than four decades after Mel Gibson’s super-charged Ford Falcon roared across the country in Mad Max, the car-loving nation is defying a global shift to electrification. Battery-powered vehicles made up just 0.7% of Australia’s new car sales in 2020, while in the UK and European Union, the figure soared to more than 10%.

The resistance is drawing the ire of global automakers, which are delaying or skipping vehicle releases in Australia to supply markets that offer EV subsidies and have more aggressive emissions targets. Volkswagen AG, Europe’s largest automaker, likens Australia’s EV policies to those of a “third-world country.”

In Australia — where Tesla Chair Robyn Denholm is based — efforts to de-carbonise road transport are among the worst in the Group of 20 nations, according to BloombergNEF. 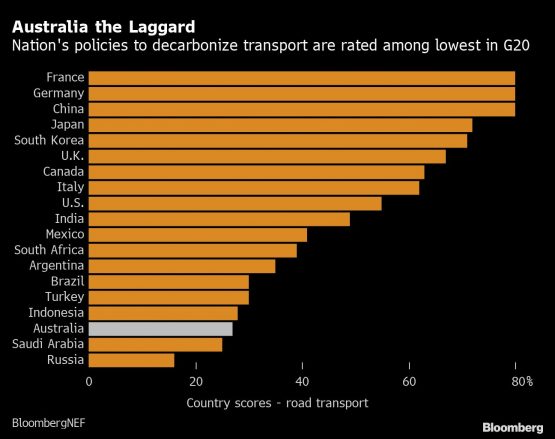 Australia’s ranking behind developing countries like Indonesia and Turkey reflects an ideological battle between a conservative government stifling electric-vehicle growth and a global car industry committed to technological upheaval.

Australia is a “uniquely hostile market” for EV makers, according to Behyad Jafari, chief executive officer of the Sydney-based Electric Vehicle Council. National policies make its citizens look like “a bunch of gas-guzzlers,” said Jafari, who wants subsidies for EV buyers like those in the UK and Europe.

Transport accounts for 18% of emissions in Australia, one of the world’s biggest per-capita polluters. Last year’s wildfires in Australia that burnt through an area about the size of the UK and destroyed at least 3,000 homes highlighted the nation’s susceptibility to climate change. A Tesla Inc. electric vehicle charges at the automaker’s showroom in Sydney.

That risks leaving Australia with the dregs of global EV production and a charging network struggling for investment.

“The government appears to be at best indifferent, at worst opposed, to zero-emission vehicles,” Volkswagen said in a statement. Australian regulation is “in some respects comparable to that of a third-world country.”

VW’s electric ID.3 hatchback, released in Europe last year, and the ID.4 crossover, probably won’t land in Australia until 2023 at the earliest, according to the company, which aims to be the global EV market leader by 2025.

Some Nissan Motor Co EVs are also skipping Australia. In a statement, the Japanese company blamed “the lack of consistent and cohesive national targets and supporting policies.” Without subsidies, price has become a major obstacle to uptake. Greg Caleo, the Sydney-based head of marketing agency Blue Hat Green, said he’d love an EV — partly to set an example to his daughters — but can’t bring himself to spend almost A$80 000 ($61 000) on one. So he’s sticking to his eight-year-old Mercedes. “I’ll drive it into the ground,” Caleo said.

Even Nissan’s little Leaf hatchbacks cost A$50,000 in Australia. That’s as much as A$16 000 more than the base models of Australia’s top-selling vehicles, the rugged Toyota HiLux and Ford Ranger. While EV sales in Australia may pick up when they cost the same as traditional cars, demand is still projected to be slow. EVs will account for only 18% of new cars in Australia in 2030, though the figure will reach 64% in 2040, BloombergNEF said last year.

Fossil fuels and EVs have served as political tools for Morrison, who has become increasingly isolated internationally for refusing to commit to a net-zero target. In 2017, he brandished a fist-sized lump of coal in parliament. “Don’t be scared, it won’t hurt you,” he told the Labor opposition. “It’s coal.”

With little policy certainty and so few EVs on the roads, Australian owners are left with comparatively few places to power up beyond the heavily populated eastern seaboard. Tasmania and the vast Northern Territory, home to Darwin and Alice Springs, have only a few dozen charging stations in total, the Electric Vehicle Council said in its annual report last year.

“The lack of policy is the catalyst that causes all the other issues,” said Jafari, the council’s CEO

The longer governments subsidise EV the longer EV will take to beat ICE fairly. Yes stop subsidies. All it needs is level playing field – so equal not higher duties (like in SA). Then eventually, appropriate carbon taxes. As city commuters and mass transport, ICE makes no sense. For those holidays in Namibia : sure, EV makes no sense.

Australia has distances a continent long. EV’s ranges are too short now.

Sorry, but most cars in say Perth NEVER travel cross-country. I live in the Cape. If I want to holiday in Kruger it makes far more sense to fly to Skukuza and rent rather than spend 4 to 6 days (and accomm cost) driving up and down.

But yes, EV makes most sense as commuter cars. First should be city buses. Smog is a bigger health issue than CO2

And yet the vast number of trips made on a daily commute are sub-50kms. With most EVs, including even the likes of the Honda-e city car, capable of over 200kms on a round trip.

Has anyone calculated how many charging stations would be needed if people around the world took to this leftist bu&^%HT idea of all of us driving electric vehicles?

It really is a “pie in the sky” idea. Burn fossil fuels and get over it.

Cannot see South or central America, Africa and most of Asia electrifying for decades

As for the Woke leftists believing carbon resources being banned, well we should all then prepare for An existance of concoction medication of chicken spirits, garlic and wild potatoes, along with horse & carriage and home woven hemp clothing

Leah, let’s not make rational choice about transport ANOTHER DAMNED LEFT RIGHT DEBATE! What next? Covid went politics. Vaccines went politics. Right to vote is for some reason also left right (in the US half a world away but anyway). Climate change is left right. Websites choosing what they choose to publish on their websites is woke-ism if the guy that owns the website chooses to banish looney right wing rubbish.

Now people that make a rational choice to use an EV for their city commute car are “woke” or whatever bloody label you want to slap on them from your echo chamber. I am on my second EV. Great car for its use 20,000km a year at 23c/km city driving. When I want to overland and camp in Botswana I drive a gas guzzling mother of an SUV that costs R2/km. But I use that 5000km a year. If I ran a bus service in my town I would ABSOLUTELY replace my next diesel bus with an electric bus. Not because I am anti diesel but because I can do math.

Also not because I am “woke” or whatever. I am sick and tired of the labels. It makes zero sense for pro-coal pro-oil to be a political issue at all. Give me any rational or even political correlation between pro-EV and woke-ism or other way around.

Existing petrol stations in the UK are already incorporating EV charging stations into their infrastructure. Its not an either/or scenario. This is a transitional phase. You don’t have to create a new network, you can piggy-back on to the existing ones.

Bear in mind that most if not all petrol stations make their money not from the petrol itself but the additional services they provide, ie, the ATMS and convenience stores.

An EV takes a lot longer to charge up, therefore it is in the owner’s best interest to add charging stations to his set-up. The longer the driver stays at the station, the more likely he/she is to buy coffee, cooldrinks, snacks, etc etc.

Why would Australia subsidise EV’s? They’ve got lower population density, large spaces, greater travelling distances, large coal deposits, an established coal industry, a lifestyle choice for utility vehicles, and no local automotive manufacturing industry to benefit from support for EV’s. I don’t think one can accuse them of being environmentally unfriendly, though, considering the relatively high offtake of rooftop solar in that country.

Firstly , Australia’s government is not conservative . It is only seen conservative from the very left labor party or the totally loony left Greens.
Electricity in Australia is rather expensive and not in abundant supply. That’s why the government generously sponsors solar systems for individual households in some states. Generally the Australians have moved away from their beloved 8 cylinder cars to sixes and mainly fours. A couple of years ago Australia commissioned a research how IQ relates to road fatalities. Interesting stuff. I checked the figures given back than and realized that Australia’s annual number of road death – while having almost twice as many cars on the road – were about equal to the number of road fatalities South Africa managed to produce in 13 days ! Makes you think – doesn’t it ?

A great many Australians are halfwits who love to make a big song and dance about how ‘un-PC’ they are.

They seem to take pride in being total knuckle-draggers. And yet their country continues to get the sharp edge of climate change. A classic case of cutting off your nose to spite your face.