Ford Motor Co. shares climbed to the highest since October 2015 after the automaker revealed plans to boost its bet on electric vehicles to $30 billion and pledged that 40% of vehicles sold would be battery powered by the end of the decade.

The stock rose 7.1% Thursday, adding to Wednesday’s gain for the biggest two-day jump in nearly a year. Ford shares have advanced 69% in 2021.

While Ford’s stock has rallied because of its ambitious electric-vehicle plans, it’s still a fraction of the size of EV trailblazer Tesla Inc. In two days, the Dearborn, Michigan-based company added more than $8 billion to its $59.4 billion market value, which is less than 1/10 of Tesla’s $608 billion market capitalisation. 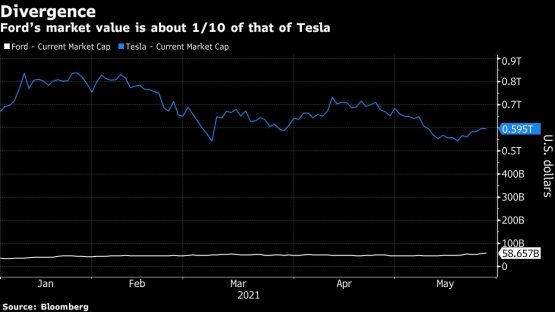 “Details of EV strategy, from battery to platforms, and CEO statements like ‘Ford will not cede truck leadership’ should put to rest lingering views that Ford is lagging key peers,” Jefferies analyst Philippe Houchois said after Ford’s Capital Markets Day.

The event spurred RBC Capital Markets to upgrade the stock to outperform from sector perform. Analyst Joseph Spak said he has increased confidence in Ford’s financial targets and the presentation helped alleviate many of his concerns regarding its battery-electric vehicle strategy. Ford has 11 buy, eight hold and two sell ratings, according to data compiled by Bloomberg.