As it expands devices.
By Mark Gurman, Bloomberg 12 May 2022  09:59
Alphabet Inc.’s Google outlined a significant in-house hardware expansion, highlighted by its first branded smartwatch to compete with Apple Inc.’s popular product.Google Pixel Watch, in contrast with the Apple Watch, has a circular screen, mimicking most classic wristwatches. The device was primarily developed by Fitbit, which Google acquired in January 2021, and includes Fitbit-based health tracking integration. 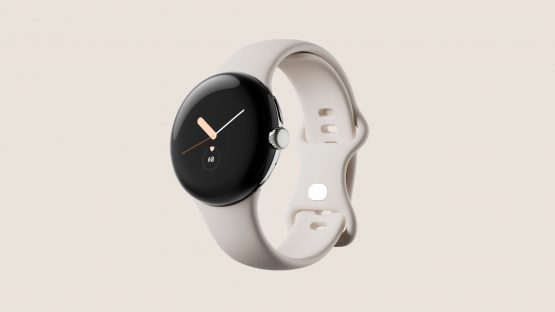 Google’s watch will run its Wear OS software and support tasks like tap-to-pay, finding directions in Google Maps and receiving notifications. It will also be controlled by Google’s voice assistant and a tactile crown on the side — similar to the Apple Watch with digital assistant Siri and its Digital Crown. Like Apple, Google will also offer a version with 4G cellular connectivity.

Unlike other smartwatches running on Wear OS, Google’s Pixel Watch won’t be compatible with Apple’s iPhones.

The smartwatch market is fairly saturated, with Apple owning about 30% of sales. Samsung Electronics Co. holds 10%, while the rest of the market is made up of Fitbit, Garmin Ltd. and smaller China-based players like Huawei Technologies Co., according to Counterpoint Research.

While Google’s hardware business has yet to become a major revenue contributor since the first Pixel phone launched in 2016, the company has continued to push out new phones and other devices annually. Google called last year’s Pixel 6 its most successful device to date, far outselling previous generations of the phone. The company doesn’t disclose hardware revenue. Google’s “other revenue,” which includes hardware, app store sales and video subscriptions, generated more than $28 billion last year.

Google’s Pixel Watch will be released in the fall, but the company didn’t provide information about the cost to consumers. In an interview, Rick Osterloh, Google’s head of hardware, said it would be a “premium-priced” device. Apple’s stainless steel Apple Watch starts at $749 and the company is planning new watches later this year.

Google is also working on a Pixel Tablet and plans to launch it next year. The company didn’t disclose pricing, specific release details or unique capabilities, but Osterloh said its size would be on the larger side. Apple sells tablets from about 7-inches to 13-inches in size, while Samsung makes a large 15-inch device. Google had stopped designing new tablets in 2019 to focus on laptops.

Osterloh also previewed the Pixel 7 and Pixel 7 Pro, the company’s next high-end smartphones planned for release in the fall. The devices will have an updated design for the back camera system and a faster processor. The company didn’t disclose pricing.

Coming sooner will be two products: the Pixel 6a and the Pixel Buds Pro. The Pixel 6a is a lower-cost version of last year’s Pixel 6, priced at $449 instead of $599. It has cheaper materials like aluminum edges, a smaller, 6.1-inch screen, lesser 12 megapixel cameras, but the same custom Tensor processor inside.

The new earbuds rival Apple’s AirPods Pro and Samsung’s Galaxy Buds Pro. Like with rivals, the main new feature is noise-cancellation, a transparency mode to hear outside noise and a stronger ability to limit background noise during calls. The earbuds also have seven hours of battery life with noise-cancellation turned on.