Let’s make a deal with our robot overlords

Robots run by algorithms will do a lot of jobs, replacing the human workers who in many cases will have trained them.
By Cathy O'Neil, Bloomberg 10 May 2020  00:59 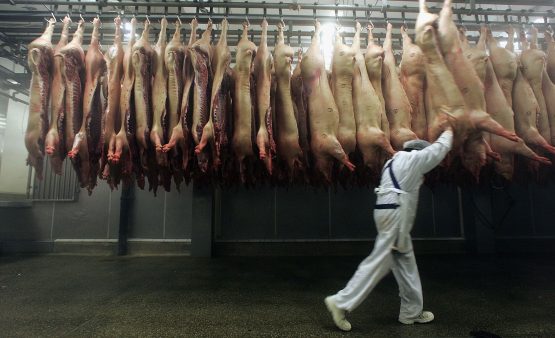 If you worry that robots will render human workers obsolete, the coronavirus pandemic offers ample reason to worry more: Surely companies will take the opportunity to replace demanding, imperfect people with machines or artificial intelligence wherever possible.

That said, I’m hoping the crisis will also create an opportunity to negotiate better terms with our algorithmic overlords.

The pandemic has made me reconsider the sanctity of work. Just look at the situation at America’s meat processing plants, where hundreds of mostly immigrant workers are getting sick. Workers have been brutally divided into two classes: those whose employers protect them from the virus, and those who lose their jobs or their unemployment insurance if they refuse to labor under dangerous conditions.

If certain businesses — say, the next generation of meat plants — can’t reopen safely and profitably with humans, they can and should do so with robots. Some jobs just aren’t good enough to protect. Until now, among the biggest obstacles was the transition cost of going from badly paid humans to machines. But if companies disrupt their workflow by actually shutting down production to save lives (as they should), then they will have paid much of the cost. They can train the robots using data gleaned by thoroughly surveilling some model workers.

It’s not just meat packing plants. Robots run by algorithms will do a lot of jobs, replacing the human workers who in many cases will have trained them. People will probably welcome the brave new world, particularly if it’s more hygienic. They’ll buy their groceries by simply taking them and leaving the store (now available from Amazon), they’ll let robots vacuum their floors (already quite popular) and deliver their purchases (not quite yet). I confess I’d prefer a self-cleaning, self-driving car so I don’t have to share space with a human driver, for both our sakes.

Accepting such a transformation, however, means subjecting ourselves to the companies that make the algorithms, such as Amazon and Google? They will essentially hold all the data, control the supply chain, and have more direct power over our consumer and even political behaviour than ever before. And a lot of people seem to be OK with that: Surveys suggest that they trust the tech companies more than the federal government.

The question, then, is what will happen to the enormous jobless underclass that such an accelerated shift to automation will create. This is where I think the sheer magnitude of the coronavirus crisis might actually help, for three reasons.

First, when so many people are suddenly and violently thrown out of work at the same time, it creates a sense of solidarity that a slow, insidious process such as offshoring does not.

Second, the jobless are not perceived, and do not perceive themselves, as at fault for their predicament. This is a natural disaster, beyond their control. They will be more likely to claim a political voice, because they will feel entitled to one.

Third, and perhaps most important, real change will look newly possible in light of the unprecedented measures the government has already taken to combat the crisis. Congress conjured trillions of dollars to bail out mostly businesses, which means it could do the same for people. Granted, that’s not what happened in the 2008 financial crisis, when the government primarily rescued the banks — but that experience could also be invoked to demand a better deal this time around.

So this crisis brings with it an opening for collective action. How it will work remains to be seen. Pitchforks aren’t effective against social-media algorithms, and Amazon might not care if some large fraction of the population can’t buy its stuff, as long as the rest keeps buying more. But if the winners of the AI revolution want to avoid the business disruption of an actual revolution, they should be prepared to negotiate a new and very different deal.

….and the point of entitlement was mentioned in relation to welfare support by the state
France has suggested taking robots in places they occupy

As for consumerism, its become quite disgusting…
E.G – Developed nations dump hundreds of thousands of near new quality clothing thrown out, shipped onto Africa …for a handsome price too

And at the same time if Ai was to grind to a halt, I doubt the global populace on the whole would physically be apt to return to the hard life of near surfdom prior to 1945, despite feudalism having made a return in the last decade via career politics and oligarchs

Welcome to the ‘Hunger Games’ Society! Don’t be fooled into thinking that what’s happening is normal evolution, it’s by design

The problem is still overpopulation. Perhaps some of us should get a
‘s-doll’ to satisfy our desires.

How many of these factory workers that got Corona19 died? We all are gonna get it but very few are gonna die.

Humans create their own downfall.

Automatisation, and the resultant rise in unemployment, is not a market phenomenon, to the contrary, it is a symptom of government intervention in the jobs market.

It is clear then, that it is government intervention in the market mechanism, and not automation, that causes unemployment. We see the example in South Africa, where the country with the most stringent labour laws and the most militant labour unions in the world, has the highest unemployment figures in the world.

The value of minerals, as determined by the consumer of those minerals, does not justify the cost of automation of the mine, and the cost of labour, as determined by the Tripartite Alliance, does not justify the employment of human labour either, so the minerals stay underground and the people go hungry. The government destroyed both the rights of the consumer to benefit from lower prices and the right of the unemployed to sell their labour at the going market rate. Both parties lose, but the politician wins votes.

History. Most of the time it revolve around items like religions, Royals, and as third, the class willing to do the hard labor and dying. The latter as ultimate proof of love for the first two.
A one percent of the world population have decided on a new order.
With vaccination, compulsory for the remaining 99 percent. All is set for them to go the corona way, in old age homes, with no offspring. War, the new way, is raging, to make all come true like enjoining life, without the usual class, spoiling your[ their ] day.

do yourselves a favour and watch “The Matrix” set of movies.