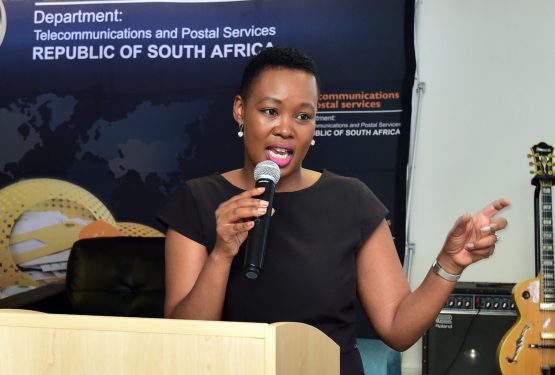 Speaking at a Telkom event in KwaZulu-Natal on Monday, Ndabeni-Abrahams said in response to a question from MC Aki Anastasiou: “It’s important to help the people that created or developed the document from treasury to understand that the world is changing, that we are no longer focusing on what they are focusing on, and this is the new direction from the people who are better advised and literate on the matter.”

The minister’s criticism of the document comes after Telkom CEO Sipho Maseko on Sunday launched an extraordinary attack on treasury’s discussion paper, accusing the department of tossing a “grenade” into the telecoms sector.

In a column in the Sunday Times, Maseko described the treasury document, which was published last week, as an “incoherent, ill-thought-out and ultimately chaotic intervention in the area of telecoms and ICT”.

Ndabeni-Abrahams was more muted in her criticism. She said that national treasury “has its own mandate as defined in the law” but that “we are one government”.

“We have approved a policy direction as cabinet, which is the highest decision-making body in government. But, of course, treasury has a responsibility to trigger a discussion on how to grow the economy, which is what I believe they were doing when they introduced (the paper),” she said.

“We in the space, who understand better, have to input on that (treasury) document and show them that gone are the days of talking about the telecoms that the document dwells on. We are talking about cloud and the Internet… I would invite us all to make inputs on that document and help treasury understand where our space is going to.”

Maseko said on Sunday that the treasury document contradicts existing ICT policy and the regulatory framework, the outcome of the priority markets investigation by communications regulator Icasa and the preliminary findings of the Competition Commission’s inquiry into the data services market.

His biggest concern appears to be that the treasury document contradicts policy formulation in ICT by other government departments, which, he warned, will result in policy uncertainty and damage investment.

“When one department advocates for a policy which has already been withdrawn — sometimes even by another department entirely — it makes it difficult for business leaders to plan and prepare accordingly,” he said.

Government should release spectrum through an auction with a small set-aside for a government-controlled network, and competition should be allowed in Telkom’s infrastructure that connects the local exchange to residential homes and businesses.

Rapid deployment guidelines that accelerate the installation of telecoms infrastructure should be finalised, and open-access conditions should be imposed to minimise unnecessary duplication of infrastructure.

Icasa’s proposed economic regulation component should be independent of line departments and be directly funded from industry levies, as per international best practice.
The state should leverage private-sector expertise in broadband roll-out, rather than relying exclusively on state-owned companies.  — © 2019 NewsCentral Media

This article was published with the permission of TechCentral. Find the original publication here.

Not only do we need good leaders at the moment, but wow – this country can do with better followers as well. Problem with “empowerment” is – once everyone is (feeling) empowered – no one wants to follow. We have so many “clever” people with “clever” solutions, policies, and suggestions, yet here we sit – 25 years after the demon was chased out and nothing….nothing but criticism, chasing easy BEE deals, poking holes, splitting hairs and sitting on fences from the revolutionary masters that brought you (fake) democracy in 1994.

Frankly I didn’t expect anything better from someone who watched Faith Muthambi work her special magic!

Given the complete and utter foul-up the ANC has made of the ITC sector, maybe a fresh approach *is* called for

When doing the right thing to benefit all, requires a disruption to all those who have been appointed in their excess numbers with excessive pay & benefits to match…their “entitlement” is choking the industries that feed the economy.

Eg: The pay & benefits awarded to ministers & deputies, government & public sector as a whole is completely disproportionate to their performance in delivering on their respective mandates. Even as immediate and deliberate intervention is required, the leadership are too weak to lead…!

Please can you identify a few of these people for us.

These ministers never cease to amaze me. The governments ICT plan has gone no where in the last decade plus. Where is the digital TV migration, delaying that by years has cripled a bunch of industries that were looking to leverage off of that.

Where is the freeing up of networks that would allow for data to become cheaper, the idea was to auction it off and raise funds for the fiscus. Cyril announced this ages ago and yet absolutely nothing has happened.

How can people like Stella here, pull a huge salary, throw a few tweets around and then criticize treasury who is actually trying to do something?

Never ceases to amaze me how poor a government the ANC is, incredible they were elected in by the very people who are most vulnerable to their incompetence.