A new exchange-traded fund is tapping into America’s love affair with strong corporate leaders — while leaving out two of its most famous tech pioneers.

The Return on Character ETF (ticker ROCI), launching Thursday, seeks capital appreciation by targeting the stocks of businesses led by “high character” chief executive officers, according to a regulatory filing. The actively managed strategy uses a model based on “integrity, responsibility, forgiveness, and compassion,” manager ROC Investments LLC said in a release.

Among those whose firms didn’t make the cut: Elon Musk and Mark Zuckerberg. The first data show neither Tesla Inc. nor Meta Platforms Inc. are included in the portfolio, while rival megacap stocks like Apple Inc. and Amazon.com Inc — helmed by Tim Cook and Andy Jassy, respectively — are among top holdings.

Dan Cooper, portfolio manager and founder of ROC Investments, said the firm’s research determines which stocks are included, a decision that’s not based on popularity or market capitalisation. He declined to comment on why Tesla and Meta were omitted at launch. 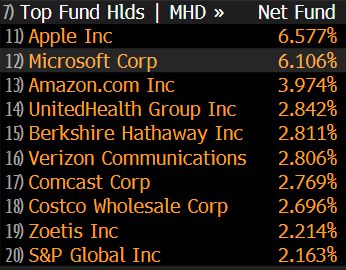 “It would be wonderful someday if the entire Fortune 500 was on the list,” said Cooper. “I don’t see this as a static thing.”

The mandate may sound fluffy, but ROCI enters one of the oldest debates in organisational management: Just how much difference does a CEO make?

While some dismiss the tendency to attribute a firm’s success to one individual, research presents a more nuanced take. Some studies highlight the damage caused by the loss of a good leader, while a high-performing executive also needs a good company in order to succeed.

“The business of character science is a work in progress,” said Cooper. “As a new area of research, we hope to be better and better every year.”

Managers of the ETF use proprietary tools to parse the public language of the CEOs of approximately the largest 1 000 companies in the US. There’s a behavioral assessment, a “controversy” assessment and character-scoring before a portfolio is built using the top 75 to 150 companies. A complete re-evaluation will be done annually.

Musk and Zuckerberg have each endured their share of controversy. The outspoken Tesla CEO has drawn scrutiny from regulators for his use of Twitter, and a 2018 tweet about taking the company private ended in a $20 million fine and Musk’s resignation as chairman. Zuckerberg has faced a range of issues at Meta, including an investor lawsuit over whistle-blower concerns that the company’s social media platform negatively affects teen mental health.

ROCI — which also excludes Adobe Inc., whose boss Shantanu Narayen is a top rated CEO on Glassdoor with a 99% approval score — will charge 0.49%.

“They may have a hard time raising money in the ETF Terrordome at that fee level and with this strategy unless they outperform meaningfully,” said James Seyffart, ETF analyst at Bloomberg Intelligence.