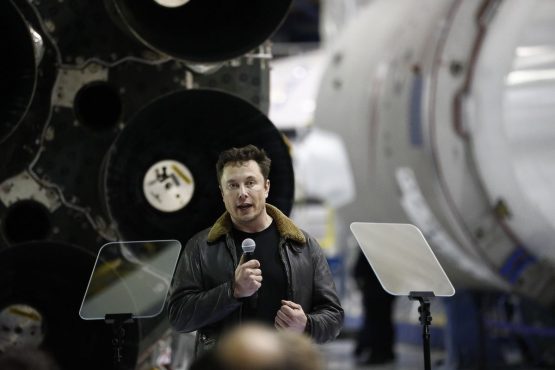 Elon Musk’s SpaceX has made a business out of launching satellites for commercial customers, Nasa and the US military.

On Thursday evening, the company will launch orbital objects of its own in a key step toward creating a space-based constellation that beams broadband to underserved areas across the globe. It’s a bet Musk is making along with fellow billionaire Jeff Bezos on bringing in revenue as an internet provider from outer space. Musk founded SpaceX in 2002 with a goal of colonising Mars.

In a phone call with journalists, Musk sounded cautious but excited. “It’s possible that some of these satellites may not work,” said Musk. “I do believe we will be successful, but it is far from a sure thing.”

The first 60 operational satellites for SpaceX’s project, called Starlink, are slated to launch aboard one of the company’s Falcon 9 rockets at around 10:30 p.m. local time Thursday from Cape Canaveral Air Force Station in Florida, after wind conditions caused a 24-hour delay to the original schedule. After the launch and payload deployment, SpaceX will attempt to land the Falcon 9’s first stage on a drone ship in the Atlantic Ocean.

Roughly one hour and two minutes after liftoff, the Starlink satellites will begin deploying at an altitude of about 273 miles (440 kilometres) above Earth, SpaceX said in a press kit, then use onboard propulsion to reach an operational altitude of 550 km. Each satellite is equipped with a navigation system that allows SpaceX to precisely position the satellites, track orbiting debris and avoid collisions.

Musk said SpaceX plans to launch roughly 60 satellites at a time as it builds out its constellation. Noting it is a “multi-billion dollar endeavour,” he said that SpaceX has enough capital for the time being. “At this point, it looks like we have sufficient capital to get to an operational level, but, of course, if things go wrong and there are unexpected issues, we will need to raise more capital in that situation.”

About 4 billion people — the vast majority of whom are in Africa and Southeast Asia — aren’t online and lack affordable, reliable access to the internet. Even in the US, a quarter of Americans in rural areas say access to high-speed internet is a major problem, according to a Pew Research Centre survey conducted in 2018.

“Starlink will afford broadband data access to the disconnected 4 billion much sooner than most would forecast,” Steve Jurvetson, a longtime SpaceX director, tweeted Sunday.

The Federal Communications Commission initially authorised SpaceX to launch and operate a constellation of 4 425 non-geostationary orbit satellites in March of last year, then approved an additional 7 518 in November. SpaceX’s plan for roughly 12 000 satellites far exceeds the 1 957 satellites orbiting the Earth now, according to a tally by the Union of Concerned Scientists.

Musk, SpaceX’s chief executive officer, first announced his satellite plans in 2015 when the company opened an engineering campus near Seattle. He said the system would cost $10 billion to $15 billion to create — maybe more — but that it would bring significant revenue to SpaceX once developed and ultimately help fund a city on Mars.

“We see this as a way for SpaceX to generate revenue that can be used to develop more advanced rockets and spaceships,” Musk said Wednesday. “This is a key stepping stone on the way toward establishing a self-sustaining city on Mars and a base on the moon. We can use the revenue from Starlink to fund Starship.”

SpaceX launched a pair of Starlink demonstration satellites in February of last year. Four months later, Musk flew to Seattle to visit the team leading the project and fired at least seven people within hours, Reuters reported, citing two unidentified employees. The dismissals followed disagreements between Musk and others over the pace at which the satellites were being developed and tested, the news service said in October.

One of those ousted was Rajeev Badyal, who had joined SpaceX from Microsoft in 2014 and was vice president of satellites. Last month, CNBC reported that Badyal is now leading Amazon’s Project Kuiper, which plans to put more than 3 000 satellites in low Earth orbit. The Starlink team is now led by Mark Juncosa, SpaceX’s VP of vehicle engineering and an eight-year veteran of the company.

“Each company has to launch a certain number of satellites to provide commercial services,” said Tom Stroup, president of the Satellite Industry Association in Washington. He noted there are already companies, including Iridium Communications, SES SA, Viasat, Inmarsat and Hughes Network Systems that are currently providing global broadband services from space.

Getting tens, hundreds, or thousands of satellites into space and operational “is no small feat,” he said.