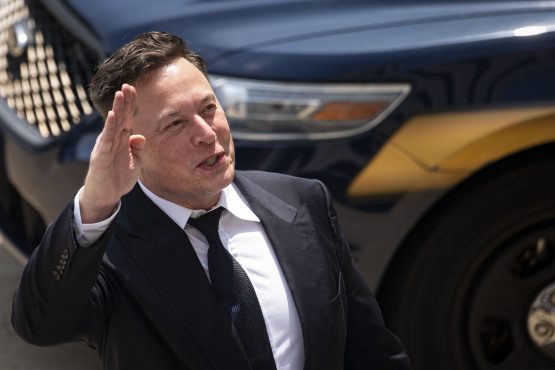 Elon Musk made more headway toward his pledge to sell 10% of his Tesla Inc. stake, and it may have cost the carmaker its $1 trillion valuation.

The world’s richest person offloaded another 934 091 shares on Monday for about $906.5 million to cover taxes on the exercise of 2.1 million more options, according to regulatory filings. He’s now sold a total of $12.7 billion worth of stock over five weeks.

The latest transactions coincided with Tesla closing below $1 trillion in market capitalisation for the first time since October 22. The shares continued to slide Tuesday, dropping as much as 2.7% to $940 before the start of regular trading. Musk’s disposals have dragged on Tesla shares, which peaked just before he took an over-the-weekend Twitter poll on whether he should shrink his holding. He’s now sold about 70% of the stock he would need to in order to offload 10% of his direct share ownership.

Before taking the Twitter poll, Musk said in September that he would exercise a “huge block” of options in the fourth quarter. He put a trading plan in place that month that has accounted for more than half of the share sales that started in November. He’s now exercised a total of almost 15 million options.

As is often the case, Musk has been busy on Twitter since his latest share sale. He announced Space Exploration Technologies Corp. will start trying to take carbon dioxide out of the atmosphere and turn it into rocket fuel, and Tesla will begin accepting Dogecoin for some merchandise.

Musk has added almost $98 billion to his fortune this year and is now worth $253.6 billion, according to the Bloomberg Billionaires Index.