But poor network coverage and customer service continue to frustrate users and drive sentiment down.
By Akhona Matshoba 26 Apr 2022  00:02 Mobile users in South Africa have responded positively to the lowering of data and telecommunications prices by some of the country’s largest mobile operators in 2021.

This is according to DataEQ’s latest South African Telecommunications Sentiment Index, which reveals that pricing sentiment across the telecommunications industry rose by 6.4 percentage points from that of the previous year.

The annual index is conducted in partnership with Deloitte Africa.

Vodacom, Telkom and Cell C saw the highest shifts in positive sentiment related to price changes – this after the mobile operators took the decision to decrease the price of their 1GB, 30-day data bundle offering in 2021.

MTN and Vodacom reduced their prices from R99 to R85, and Cell C from R95 to R85, while Telkom implemented the largest price drop from R99 to R79.

The decision to lower data prices came after mobile users expressed their dissatisfaction with the high cost of staying connected in the country, which gave rise to the widely-publicised #DataMustFall campaign.

Vodacom – which continued to implement price cuts in 2021 – reportedly recorded the largest increase in price ‘net sentiment’ in the industry. “Cell C’s data prices were often a point of positive brand comparisons and referrals, with customers praising the Home Connecta 100GB deal for its affordability,” the DataEQ report says.

Poor network coverage and poor customer service are among the main factors contributing to negative consumer sentiment, according to the report.

Demonstrating the level of negative sentiment towards telcos, the study shows that the telecoms industry recorded the lowest average (-31%) net sentiment in comparison to the banking (-7.5%), insurance (1.4%) and retail industry (4.1%). 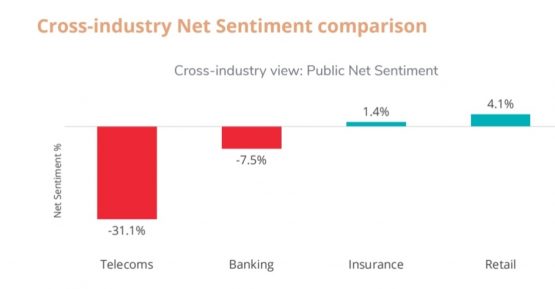 “Load shedding has also had a devastating impact on the industry, pushing operational costs up at a time when margins were already under immense pressure,” she adds.

Poor network connection, partly due to insufficient spectrum infrastructure as well as load shedding, reportedly made up a third of all operational complaints observed in the study.

“Network complaints were more prevalent for MTN in 2021, which presents a risk for a provider that has historically distinguished itself by its network quality and coverage,” says the report. According to the index, the country’s telcos replied to 41.3% of priority conversations. Vodacom recorded the fastest response rate of 1.7 hours, while Cell C came in second at 2.4 hours.

“Notwithstanding some successful brand and influencer campaigns, customer experience remained a major shortcoming across the industry, with consumer sentiment for this aspect worsening year-on-year,” says DataEQ managing director Melanie Malherbe.

This may come in the shape of investing in spectrum and infrastructure that will shield customers from the effects of load shedding, which is a key point of frustration for mobile users in general.