Once-buoyant mobile business is under real pressure, with lower revenues and margins down 20% …
By Moneyweb 4 Aug 2022  00:01 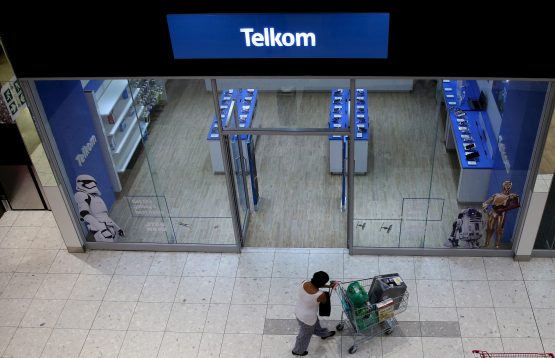 If the deal was off tomorrow, it would not be good for the Telkom share price. Image: Bloomberg

Perhaps ‘struggling’ is not the appropriate term to describe the entire Telkom group’s performance between April and June this year. There’s a single division that is trading well: Openserve, which operates its market-leading fibre network across the country.

Households that connect to Telkom’s fibre are doing so through Openserve and typically use internet service providers like Afrihost, Cool Ideas, or Axxess.

Openserve now passes 890 000 households that have fibre services, 415 000 of which are connected and paying for its services.

It is this unit that MTN desperately needs for a future dominated by 5G mobile connectivity, fibre-to-the-home (and business) and an insatiable demand for bandwidth from its customers.

Openserve’s fibre network spans over 169 000km – roughly double that of a combined Vodacom/Vumatel/Dark Fibre Africa (a transaction that was announced at the end of last year).

As for the rest of Telkom?

The future does not look bright.

And that’s the conundrum facing the group (and shareholders).

There is an immense amount of value trapped in the group, even after the 23% jump in the share price in the nearly three weeks since the MTN approach was made public.

At Wednesday’s close, the market valued Telkom at R21 billion.

But remove Openserve and the mobile business from the group and there’s not an awful lot left.

The other three units – Telkom Consumer and Small Business (excluding mobile), BCX and Swiftnet (the masts and towers unit) – are not valued by the market at all in the current situation, but none are actually growing.

Revenue in all three declined in the quarter, and it’s not likely there will be growth of anything greater than low single digits (if there’s any growth at all) over the medium term. One could argue that this is the very reason the market is not paying much attention to any of these businesses within the Telkom structure (and why Maseko set in motion the plan to list Swiftnet separately).

One part of the business that is growing is mobile, but Telkom Mobile remains sub-scale. Although profitable, margins are nowhere near those of rivals.

Its earnings before interest, tax, depreciation and amortisation (Ebitda) margin contracted by a fifth – 5.4 percentage points – to 23% (half of the Ebitda decline was due to “specific initiatives” to get its post-paid/contract base growing again – contract subscribers grew by 8% but revenue from them is down 8.8%).

Despite subscriber growth of 7.8%, mobile service revenue actually declined in Q1 (down 3.6%), something that was rather predictable a year ago already. This means not only is it adding fewer and fewer profitable customers (witness the margins), it has not been able to grow usage (revenue) enough to offset the declines in pricing (for example, effective per megabyte data prices are down 14.8% year-on-year). At 17.3 million subscribers, it’s hard to see this base growing anything close to double digits anytime soon.

Telkom has trimmed capex to just R1 billion in the quarter – with most of its budget allocated to fibre (Openserve) and mobile. It argues that much investment was “front-loaded” in the last two years because of the temporary spectrum allocated during the Covid-19 pandemic.

In its full-year results, it reported negative free cash flow of R2.1 billion – typically a huge warning sign. It says approximately half of this amount was invested in spectrum, with “underlying negative free cash flow” of R938 million. Sure, capex may have been front loaded and payments may have been rolled over from the prior resulting in this position, but let’s see what the capex and cash flow figures look at the half-year mark …

The group announced that the legal separation of Openserve was complete and that effective 1 September, it would operate as a subsidiary of Telkom.

Might this timing be perfect for a far simpler buyout by MTN?

Its far larger rival would be able to cherry-pick the parts of the business it wants (mainly Openserve).

It is unlikely MTN would see any value in Swiftnet – although it could on-sell this to IHS Towers at a profit (it sold its South African towers to the NYSE-listed operator earlier this year).

There may be some thinking around merging BCX into MTN Business to add scale.

And it is surely not likely to want the consumer and mobile business – it is practically an impossibility that regulator Icasa would approve this.

Would government (especially the relevant ministers), as 40.5% shareholder, approve a transaction? Much would depend on the deal’s structure.

If the deal was off tomorrow, the Telkom share price would collapse – and because of the first quarter results, likely trend even lower than where it was before the news broke.

What’s the alternative? A mostly sub-scale business battling along as margins continue to decline, with the market affording zero value to most of the group?

Listen as Simon Brown chats to FNB’s Thabiso Mamathuba about the regulatory hurdles the deal faces in this MoneywebNOW podcast:

Quite incredulous. Telkom could have been the largest Cell Co. on the continent, if if wasn’t ‘captured’ by ANC cadres and the Oliphant Consortium.

Characters like Kennedy Memani, Andile Ngcaba, the Oliphant Consortium, the Lion Consortium, the Buffalo Consortium and Wiphold among others are running around with their billions from Telkom and now this. All the select cadres are richer, but not much transformation and not much strategic gain.

So much of SA industry was and could still be continental leaders. In fact SA has all the resources in raw materials and talent to regain that status if only we could get rid of the cadre-collective mentality.

There must be massive Competition hurdles for this deal. If it goes ahead, MTN and Vodacom would control all mobile, fiber and copper telecomms in SA. Consumers better pray SpaceX covers SA soon…